Oh, how the mighty have fallen.

On Sept. 10, London's Sunday Times published an article by Camille Paglia about Lady Gaga entitled "The Death of Sex."

If one searches the once-controversial, superstar critic's name, it is now linked everywhere (think tick, think tiger) to the singer-songwriter Lady Gaga's name and image.

Search for Lady Gaga alone, and find, from moment to moment, breaking news: about her sweeping the MTV Europe Music Awards in Madrid on Sunday, winning best pop, best female and best song (for Bad Romance); about a course being taught about her at the University of Southern California; about a wax figure of the "gay icon" soon to be unveiled; about her appearing in London wearing one half of a tuxedo.

The same can't be said of Paglia, who is now, fleetingly, hot for hating Gaga, "the gangly marionette or plasticized android," and her "insipid" music. She hates her for wearing sunglasses ("rudely") during interviews; she hates her failure to put forward "Madonna's valiant life force."

Yet by daring to offend "Generation Gaga" by attacking their leader, Paglia has given herself a modicum of social currency (of which Gaga has so much, she is often photographed amid piles of cash).

So who is the desperate one?

When Paglia published Sexual Personae: Art and Decadence from Nefertiti to Emily Dickinson in 1990, she galvanized the then-flagging feminist movement with her savage attacks on its dogma, and the subsequent rage of the women and ideas that she savaged.

Inflammatory statements such as "If civilization had been left in female hands we would still be living in grass huts" were shrewdly designed by the genuinely bookish social pundit to excite discourse.

And while most of the reaction was negative (there are still contexts in which mentioning her name elicits a hiss,) the "Woman Warrior," who posed beside this cognomen on the cover of New York magazine in 1991, revelled in the fame that she felt had too long eluded her.

Paglia posed with a sword; she travelled and posed, in 1992, for Vanity Fair, with two muscular black men ("My centurions") and in a push-up bra lent to her by her new BFF, model Lauren Hutton.

She wrote fawning encomium after encomium about Madonna, who finally acknowledged her by brushing her off as yet another woman who wanted to have sex with her. And she continued to advance her sexual philosophy, one predicated on a deeply romantic sense of the fundamental entanglement of nature and violence. (Think of Wordsworth's poem Nutting, in which he rapaciously savages a tree, then imagine the tree is a woman, a woman like Madonna or Brenda Vaccaro, another of Paglia's icons, et voilà!)

In "The Death of Sex," Paglia strikes again, more or less, by assailing a seemingly unimpeachable star. Such critical assaults are craven ways of biting off the star's power; of reversing the punishing hierarchy of celebrity.

Here is the argument at the centre of a lot of wild, surprisingly conservative (damn kids and their cellphones!) squawking: "For Gaga, sex is mainly decor and surface; she's like a laminated piece of ersatz rococo furniture.... Is it the death of sex? Perhaps the symbolic status that sex had for a century has gone kaput; that blazing trajectory is over.…"

What is surprising about this frantic article is that Paglia is a true modernist who believes - in the manner of a reconstituted T.S. Eliot - that "All objects, all phases of culture are alive. They have voices. They speak of their history and interrelatedness. And they are all talking at once!"

Then why has she failed to see how Lady Gaga references, then changes the "phase of culture" Madonna embodied, in various incarnations?

Lady Gaga is purposefully "gangly," her face "blank, lugubrious." Because she is (the arrival of the blow-up Lady Gag Gag sex doll this week notwithstanding) a new kind of sex symbol, one whose talent and disquieting innovation supersedes her pan-sexuality; one who mocks (most effectively in Telephone) the stylized sexy dancing, postures and porn-faces of female superstars before her.

Why does she have to be a sex icon? It is this question that is missing from Paglia's long answer. What if her ambition is to be an artist who is, to quote Anne Sexton, "no more a woman than Jesus Christ was a man"?

Sex is not dead, but the kind of vanilla hetero-sex Paglia loves (that is static, receptive and hostile to subjectivity) may very well be.

If Lady Gaga doesn't make her hot, that is her problem. And it is a serious problem indeed for a pop paragon, who once almost understood the trajectory of the true female radical; who once travelled it herself. 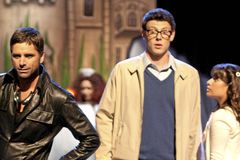 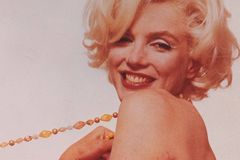