As the country celebrates its 149th birthday on Friday, there are many different ways Canadians will mark the occasion.

The Canadian Press asked some of the nation's artists to reflect on the holiday and what Canada means to them:

"It's just a matter of personal history and the history of my friends. We have conversations and realize that everybody one or two generations ago came (to Canada). Without that we wouldn't be here. People don't have a lot choices about where they get to (live). For me, being born in New Delhi, India and being able to come here and grow up here, it's incredible."

"We're in a very divisive time: our neighbours are polarized. Scary things are happening on our borders and overseas. As a father, it's concerning for me because we don't seem to be pulling together as a planet.... Isolation is not the answer, more guns is not the answer. More love is the answer. With the Fort McMurray fire, our response was with love and that's a lesson for the world."

"As long as I'm on the ocean I'm happy. There's been a number of Canada Days where I'm performing. (This year my family is) just going to be at the beach, have a barbecue and hopefully have a house full of people. If I'm not working it's definitely a family event."

"We love playing shows on Canada Day, if we can. The vibe is never better the rest of the year. You connect Canada Day with bands like the Tragically Hip ... we're hoping to see them a few times over the summer and catch that tour."

"There's something to being Canadian. The fact we have a rich musical heritage, historically being sandwiched between (European and American) cultures and being kind of shunned and shy, we've developed an introspective approach to music."

"Sound of Your Heart" singer Shawn Hook on a memorable Canada Day:

"When I'm not performing I just like to go to the lake. I grew up in a small town just outside of Nelson, B.C., and a bunch of my friends would go tubing down the Slocan River and just relax."

"I grew up in Thunder Bay, Ont., and for most of my Canada Days I would go to this (local park) called the Marina, which is this place where most people would migrate, watch bands and get drunk. I'd go to 7-Eleven, buy a Slurpee and a mickey of whisky, and pour it into this giant Slurpee. I would walk around with my friends and drink it. That was my Canada Day."

"Lost Boy" singer Ruth B on why it's a special holiday for her:

"Canada Day is actually the day before my birthday so I always have a lot of fun. I'm excited to go back home (to Alberta), just for like one day, and hang out with my family and friends. We'll eat a lot of food and see movies."

"My grandmother is from Quebec City ... so a lot of people don't know I have a little French-Canadian connection — so, je parle francais un petit peu. Some of the best fans I've ever had in my entire career are Canadian. They're just so loyal — from "Young and the Restless" to "Criminal Minds" and everything in between. I know this is Drake's house in the Six, but I'm going to at least rent a room for a minute." 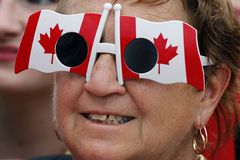 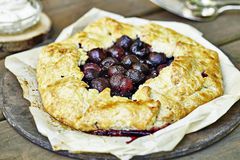 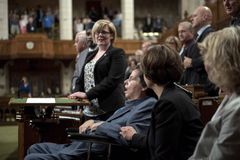