Out of Place/Non Lieu at the Art Gallery of Hamilton Until Sept. 25, 123 King St. W., Hamilton; artgalleryofhamilton.com

Here's a head-scratcher: How do you create an exhibition that explores the concept of liminality, i.e. the state of being in between two spaces, and uncertain of either, without going too far and getting lost yourself?

The answer, according to Out of Place/Non Lieu, a fascinating and fascinatingly frustrating (on purpose) exhibition at the Art Gallery of Hamilton, is to consult first with Quebec – or, more specifically, a trio of artists of francophone/Québécois heritage.

It's a good bet, after all, that any artist from this heritage group will have confronted these issues at some point in her or his career – because if there's a place in our hemisphere that has generated more navel gazing over its role on the planet than Quebec, I do not wish to visit. I have enough neuroses of my own, thanks.

Out of Place/Non Lieu offers works by multimedia artists Lise Beaudry, Isabelle Hayeur and Marie-Josée Laframboise, three master technicians, each of whom is a skilled manipulator of viewers' perceptions and expectations. Being "out of place" never looked so slick.

Hayeur's large format photo-based works confront (and seek to renegotiate) the loaded legacy of Quebec City's historical district, in particular the city's increasing shift from a vital symbol of national aspiration into an accessible-by-car mini Europe for U.S. tourists. Focusing on an abandoned and abused church as a metonym for Quebec's reprioritization, Hayeur photoshops the decaying relic onto various new, equally loaded landscapes, including, of course, the Plains of Abraham.

The effect is disorienting for two reasons. First off, Hayeur's photoshopping is seamless. She could fool a crime lab with her cut-and-paste skills. Second, and more important, the derelict building is, by being inserted into various new locations and thus highlighted, suddenly made far more important than it may merit. In cold truth, the busted-up church is rather unremarkable, a typical pile of rocks possessing neither charm nor distinction.

One has, then, to ask the obvious – is Hayeur questioning, by extension, Quebec culture's relentless attachment and examination, to the point of over-validation, of every utterance and every artistic iteration that comes out of its collective psyche? Furthermore, if historical imagery can be so easily manipulated to create new histories, is the Quebec narrative equally pliable, even suspect? Hayeur's images destabilize familiar historicities by showing us how easily new ones can, and regularly are, created.

While Hayeur crafts works that address the erosion and elliptical nature of history, Lise Beaudry's photographs of a frozen lake perform a more direct act of erasure – to the point of near invisibility.

A frozen lake is a constantly shifting landscape, one prone to unpredictable breaks and reformations, but Beaudry sets aside this easy metaphor for identity. Her images of the lake are saturated in hot white light, making the icy, crusted details almost indiscernible. Identity isn't malleable here, it's in hiding.

We cannot know everything about the ground (or, in this case, the water) that we stand on, Beaudry appears to be arguing, so why do we rely on supposedly realistic photographic representations of surfaces? Our sense of being located, orientated, is always disputable. Simply put, an abstracted landscape is as accurate as any other.

The accompanying video projection by Beaudry is similarly baffling, and just as easy to miss, or misunderstand, despite the fact that it takes up an entire wall.

Employing an underwater camera, Beaudry projects a long video loop of life under the ice – bubbles glide up slowly, a fat fish bumbles past the lens, and a whole lot of nothing happens for minutes on end. Until I saw the fish, I did not realize the video was depicting an underwater scene. Plus, the video is manipulated to downplay all colour, iridescence, and shifts in the intensity of light – again, to near occlusion.

While I enjoyed the mystery of Beaudry's dreamy mer-scape, my companions felt Beaudry had taken her experiment in minimal presentation to a pointless extreme – there was simply not enough on the wall. And, in a related critique that may be beyond the artist's control, both noticed that the video was surrounded by too much ambient light, which in turn lead to questions of intention. Is the video meant to be almost impossible to comprehend, or is it merely not well projected?

But that's the inherent risk of an exhibition like Out of Place/Non Lieu, wherein the lines between recognition (and cognition) and bewilderment (and dissociation) are blurred, pushed from the knowable toward distraction, absence of mind, and, in the case of my friends, subsequent dismissal.

Happily, we all agreed that Laframboise's clever installation, a mass of bright green netting pulled and weighted to resemble a rolling landscape, is an undiluted delight. Taking up an entire side room, the spidery nets engulf the visitor, who, if he/she is taller than a large dog, is forced to duck and slink in order to avoid entrapment.

Fragile and transparent yet weirdly forceful, Laframboise's installation is an assertion (granted, temporary) of an immediate and trustworthy reality, said reality's distinct forms, and of the confidence, if not joy, that upholds all suspensions (quite literally in this stringy case) of disbelief.

Laframboise creates an island of gentle certainty in a misty sea of calculated uncertainties.

Glavin's new poster series positions common alarm panels as both active objects designed to protect and passive objects meant to blend into their surroundings. Being secure and looking secure are very different things.

The culmination of the annual galleries-by-bike jaunt, this show is full of big and small surprises. Look for a sci-fi pod nest on a tower, by collective TH&B, and Gareth Lichty's cheerful, bright orange faux topiary. 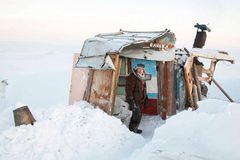 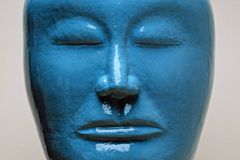 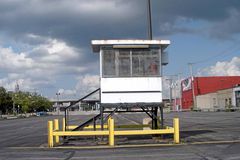