Social media played a significant role in many of the major news events in 2011. This week, The Globe's #yearinhashtags project examines the impact social media had on five of the year's biggest stories: Arab Spring, Charlie Sheen, B.C. riot, Occupy Wall Street and the "It gets better" campaign.

This time last year, Charlie Sheen probably thought hashtag was a game where you chased the guy carrying the drugs. He learned quickly, though, with a little help, and #tigerblood, the cryptic hashtag he coined, became the second-most popular of 2011. He also popularized "#winning," which was seized on by his millions of followers and opportunistic retailers from Target to McDonald's.

The celebrity presence exploded on Twitter in 2011 and redefined the microblogging site.

In late winter, the then-star of Two and a Half Men was an Internet meme (or a hospitalization) waiting to happen. Feuding with the producer of his show, trashing hotel rooms, accused of menacing his wife with a knife, the highest-paid actor on television was also giving interviews filled with gnomic but highly quotable quotes. Alcoholics Anonymous, he told an NBC interviewer, was for "people that don't have tiger blood, you know, Adonis DNA." Asked if he was bipolar, he replied that he was "bi-winning."

To many, this seemed like the kind of magnetic poetry found on a frat boy's fridge. But for Arnie Gullov-Singh, it sounded like a lucrative Internet star in the making. Mr. Gullov-Singh is the CEO of Adly, a California company that pairs advertisers with celebrity Twitter users. In February, Mr. Sheen's management team was tired of seeing him lampooned in the press, and wanted the actor to communicate with his public directly. They approached Mr. Gullov-Singh's company to teach Mr. Sheen to use Twitter.

"We gave him a bit of an overview and taught him how to use hashtags, how to share pictures, how to engage an audience," Mr. Gullov-Singh said by phone from his California office. He shared with Mr. Sheen his philosophy for successful tweeting: content, comedy, controversy. Mr. Sheen was a natural with hashtags, which are created by marking a word or topic in a tweet with a # symbol to make a search category. "He'd been saying things on TV like 'tiger blood' and 'warlock' and 'winning,' and we said to him, 'you know, those would make great hashtags.' Sure enough, they went viral."

On the evening of March 1, Mr. Sheen joined the Twitter fray with a tweet that would not have made Oscar Wilde green with envy: "Winning ..! Choose your Vice … #winning #chooseyourvice". It was attached to a photo of the actor and one of his "goddesses" holding chocolate milk and juice bottles. A few hours later, he tweeted: "I'm here for my people! Bring it on! #tigerblood".

The tigerblood hashtag – perhaps because it was so meaningless it could represent anything – became the second-most popular on Twitter the day he introduced it; it was also the second-most-used hashtag in 2011, after #egypt. On March 2, Mr. Sheen was acquiring 2,500 followers per minute. Within 25 hours and 17 minutes, he'd reached a million followers, an achievement noted by the people at the Guinness Book of Records.

Nine days after joining Twitter, Mr. Sheen announced he would do a one-man show across North America: The "Violent Torpedo of Truth/Defeat is Not an Option" tour. However, mockery was an option, and soon Twitter was full of hashtags suggesting how little some people wanted to see the actor live on stage – with one non-fan suggesting that a #colonoscopy was preferable. The tour was so shambolic that it made the previous 12 months of Mr. Sheen's life seem monastic by comparison. The New York Post proclaimed that he "stank up Radio City Music Hall like a flatulent goddess."

While sports and pop stars have used Twitter since its beginning, Mr. Sheen's arrival took it in a new direction. His tweets were discussed on mainstream newscasts. The American Red Cross used #tigerblood to solicit (human) blood donations. McDonald's suggested it would introduce a menu item called "McWinning." By the time Mr. Sheen had secured his first sponsorship deal with internships.com six days after joining Twitter, the hashtag #winning had been declared ironic, and therefore dead, by the website Jezebel. Still, Mr. Sheen currently has more than 5.7-million followers, and adds 20,000 a day.

"Two thousand eleven has definitely been the year when celebrities embraced and defined Twitter," Mr. Gullov-Singh said. In other words, it became a platform where the deepest intimacies were shared (Ashton Kutcher and Demi Moore's divorce) and blunders were amplified (Russell Crowe's campaign against circumcision). It was telling that the greatest number of tweets-per-second came not when Osama bin Laden was killed (5,106 tweets per second), but the announcement during the MTV Video Music Awards of the impending wonderbaby of Beyoncé and Jay-Z (8,868).

More importantly, it was the year that celebrities learned how to make money from Twitter. Adly is only one of a number of companies that harness celebrity tweeters with advertisers. Mr. Gullov-Singh's clients – from Lindsay Lohan to 50 Cent – are paid anywhere from a few hundred dollars to $10,000 per tweet to shill everything from cosmetic dentistry to cars.

For other Twitter gurus though, the money-per-tweet model is akin to leaving cash on the nightstand. "Individuals who are out there to make transactions with pay-per-tweets, it's a turnoff for their fans, rightfully so," says Amy Jo Martin, the founder and CEO of Digital Royalty, a Los Angeles company that helps turn athletes into lean, mean tweeting machines.

Ms. Martin is Shaquille O'Neal's Twitter coach, and she was with him on June 1 when the basketball great made the surprise decision to resign from the Boston Celtics and retire from basketball through Twitter. "The NBA didn't even know that he was retiring," she said. "It was all about Shaquille telling his fans first." That day, #shaqretires was the most popular hashtag on Twitter.

Ms. Martin approached Mr. O'Neal three years ago when they were both working for the Phoenix Suns (he was on court, she was in the media office). He said, "What's Twitter?" She quickly discovered that he was game for some very goofy stunts, which he promoted on his Twitter feed as "Random Acts of Shaqness." She'd make the basketball star stand on a street corner handing out tickets (he would have been hard to miss at 7 feet tall) or have him phone fans at random.

Through these dogged interactions with fans, Mr. O'Neal built up a base of nearly 4.7-million followers. For Ms. Martin, who's also Twitter guru to Dwayne (the Rock) Johnson and the brawlers of the Ultimate Fighting Championship, making money from tweets isn't the point. It's all about building long-lasting relationships.

In tweeting his retirement after 19 seasons, Mr. O'Neal linked to a short farewell on the video-sharing site Tout. It was an unorthodox move that grabbed headlines, and also helped strengthen the loyalty of his followers, Ms. Martin said. "He'd built this bridge to million of fans and, post-athletic career, that bridge will always be there. That's another benefit for celebrity athletes, because the spotlight doesn't shine forever."

The spotlight has dimmed somewhat on Mr. Sheen in the last few months, though his Twitter fan base continues to grow at the same remarkable pace.

It remains to be seen whether he can emulate the longevity and creativity of Mr. O'Neal and other social-media pros. This month he may have reached the absolute zero of uncool when he accidentally tweeted his phone number to all his followers. Was it a sultry goddess he was trying to reach? No, it was 17-year-old Justin Bieber.

Russell Crowe tweets: "Circumcision is barbaric and stupid. Who are you to correct nature? Is it real that GOD requires a donation of foreskin? Babies are perfect." Also: "Many Jewish friends, I love my Jewish friends, I love the apples and the honey and the funny little hats but stop cutting yr babies." A few hours later he apologized through Twitter ("Wasn't intending offense") and removed the original tweets.

Demi Moore, following rumours of Ashton Kutcher's infidelity, posted a picture of herself with her eyes closed attached to the message: "I see through you …." The picture has been viewed more than 314,700 times to date.

Ashton Kutcher announces his divorce to his 8.8 million followers. "I will forever cherish the time I spent with Demi. Marriage is one of the most difficult things in the world and unfortunately sometimes they fail. Love and Light, AK" This is soon followed by #baddemiashtonjokes, including: "Dude, Where's My Marriage?" 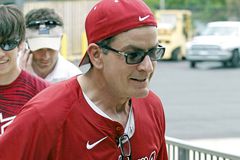 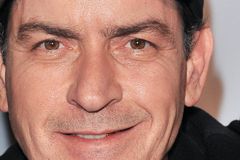 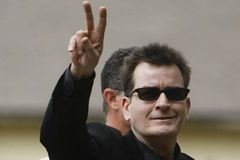 Sheen continues to rant and rave, but that’s enough about that
March 1, 2011
Andrea Canning rides the Charlie Sheen 'tsunami'
March 4, 2011 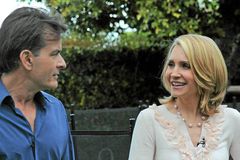 The real craziness: Our glee at Charlie Sheen's breakdown
March 7, 2011 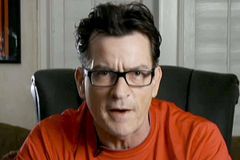