Everyone backstage calls Cirque du Soleil a family, but it’s never more obvious than when director Michel Laprise is around. It’s half an hour before a Friday matinee and so many performers in makeup come to hug and greet Laprise that his cheeks are marked with lipstick and green glitter.

Back in Montreal after a month travelling to Japan, China, Las Vegas and Toronto (where he spent three days dancing at WorldPride), Laprise is excited to watch his show, Kurios: Cabinet of Curiosities, again. Throughout its first month this past spring, the director had been sitting in the audience almost every day. Today, along with a dark denim jacket emblazoned with the company’s insignia, he wears an indefatigable smile – he is inviting every single person backstage to a party at his house on the weekend. 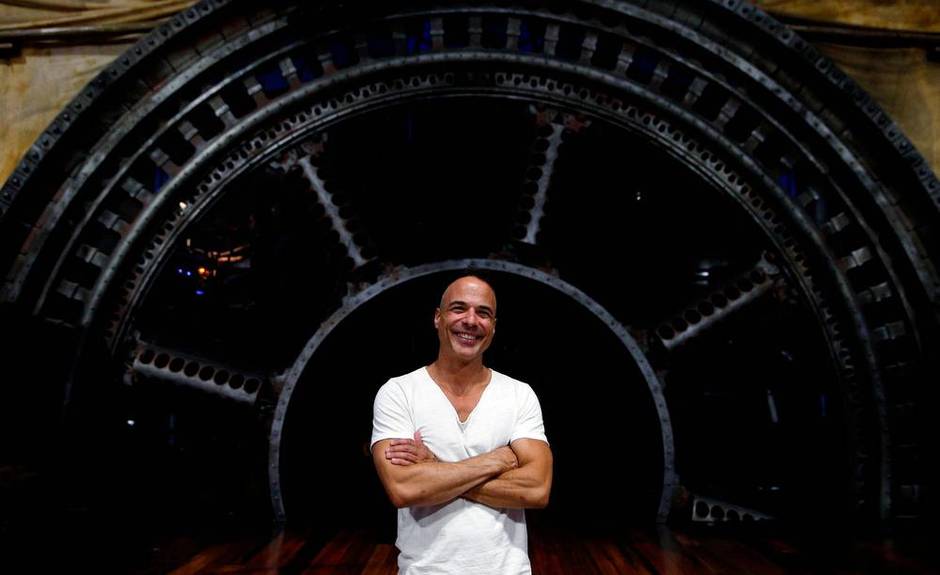 Michel Laprise poses during a rehearsal in Quebec City. (Photos: Mathieu Belanger for The Globe and Mail)

Laprise’s directorial debut reinvents Cirque du Soleil, the Canadian entertainment company that is celebrating its 30th birthday this year. “I know the house, so I know how to challenge the rules,” says Laprise, who started working with Cirque in 2000, first in casting and then in special events. “I don’t want us to be sleepy; we have to be awake all the time.”

Kurios certainly keeps the audience wide awake. Beneath the yellow- and blue-striped grand chapiteau, the show takes place in an alternate steampunk reality where a mad scientist transports an ensemble cast of mechanical, aquatic and humanoid creatures into his laboratory from a parallel dimension. Invention plays a starring roll, from what was then new technology, like the airplane, to innovations on circus classics: a puppet show where a human hand is a creature that breakdances and rides a hot-air balloon, a big top where the performers are invisible, and a balancing routine with an anti-gravity, upside-down twist. Kurios is beguiling because it’s more clever than merely death-defying (although, beware, a few acts will induce popcorn stress-eating). It captivates with novelty, evoking that same feeling of wonder Laprise says he experienced when he spied on a Cirque du Soleil dress rehearsal as a little boy. 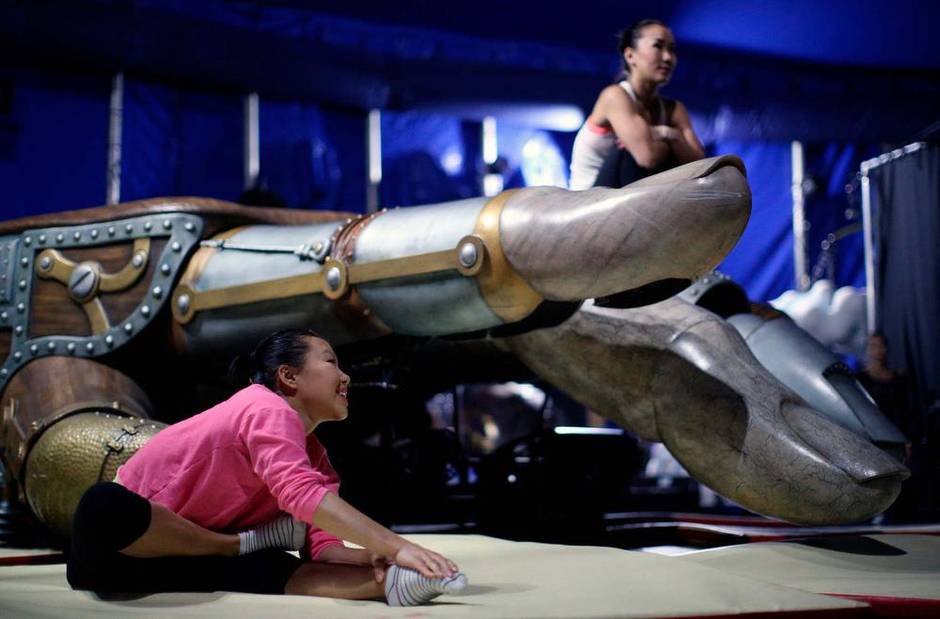 A contortionist warms up before a rehearsal.

Backstage – an ecosystem that supports 107 people on tour, 150 local hires in every new city, and comes complete with generators, cafeteria, laundry rooms and a medical centre – is equally remarkable. Every effortlessly polished performance belies the endless practice and personal sacrifice that is a prerequisite of life with the circus.

For many in the family, joining the company has been a life-long dream. Australian Nathan Dennis started trampoline when he was nine, after watching Cirque’s Saltimbanco, which ran for more than 20 years before closing in 2002. “It was never my goal to go to the Olympics or the World Championships,” he says. “It was always, when I was old enough, audition for Cirque.” For Dennis, the dream came full circle when he was cast in the same show. “I don’t think I celebrated. I think I went straight to the gym to train,” he says, laughing. 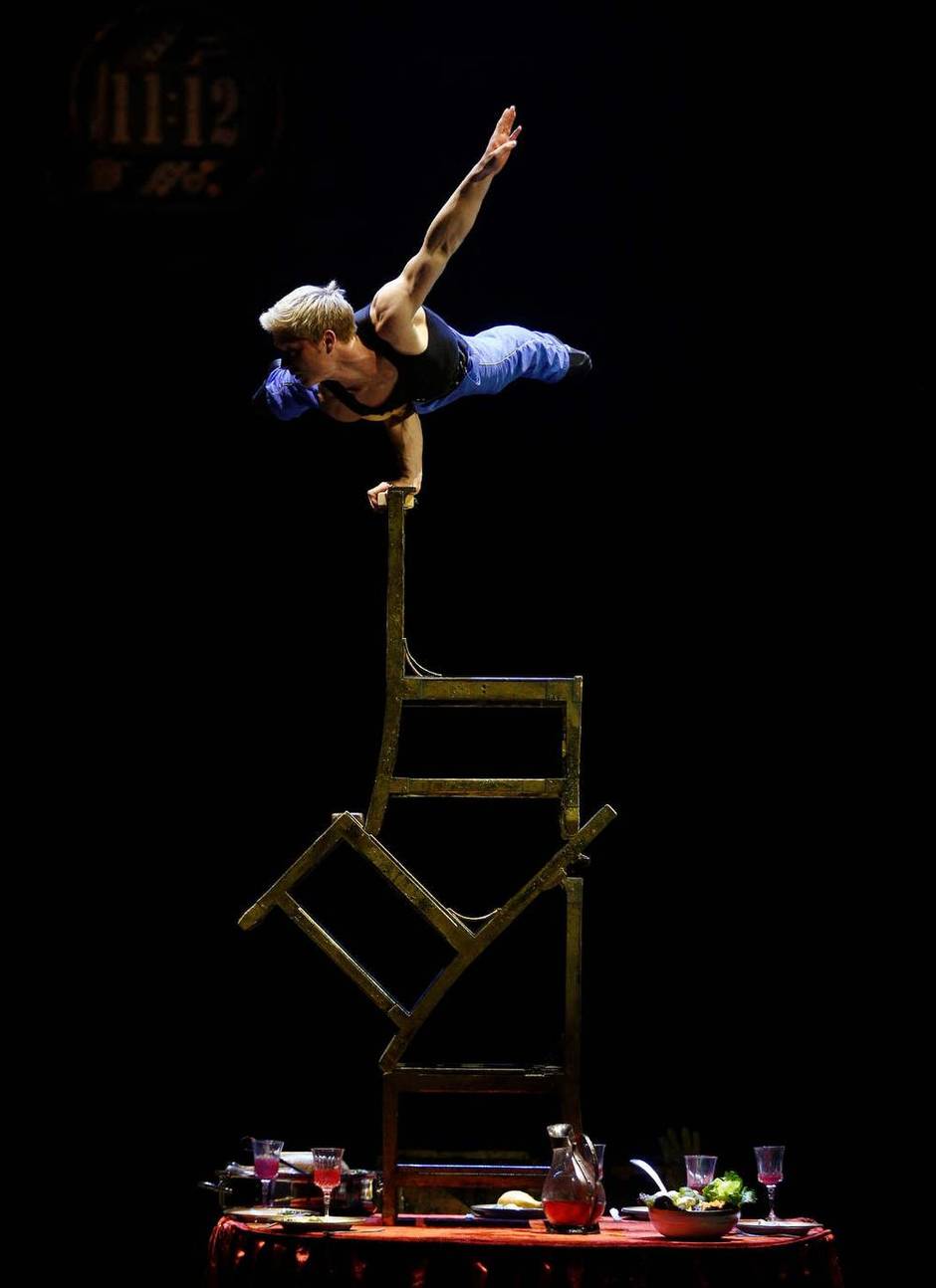 The acrobat toured with Saltimbanco for six years before joining Kurios when rehearsals began in January. In this new production, he is part of the Acro Net act, which features a net that stretches across the stage and allows acrobats dressed as extraterrestrial fish to jump to breathtaking heights, launched by the weight of other performers, their bioluminescent fins flapping slightly in the breeze.

Polish performer Lidia Kaminska plays the accordion in Kurios, a skill she has been perfecting since first picking up the instrument when she was nine. She toured with Alegria for over four years before signing on with Kurios. “The show is always different,” Kaminska says. “Seeing the acts is very inspiring every day – it’s like real people doing unreal things.” 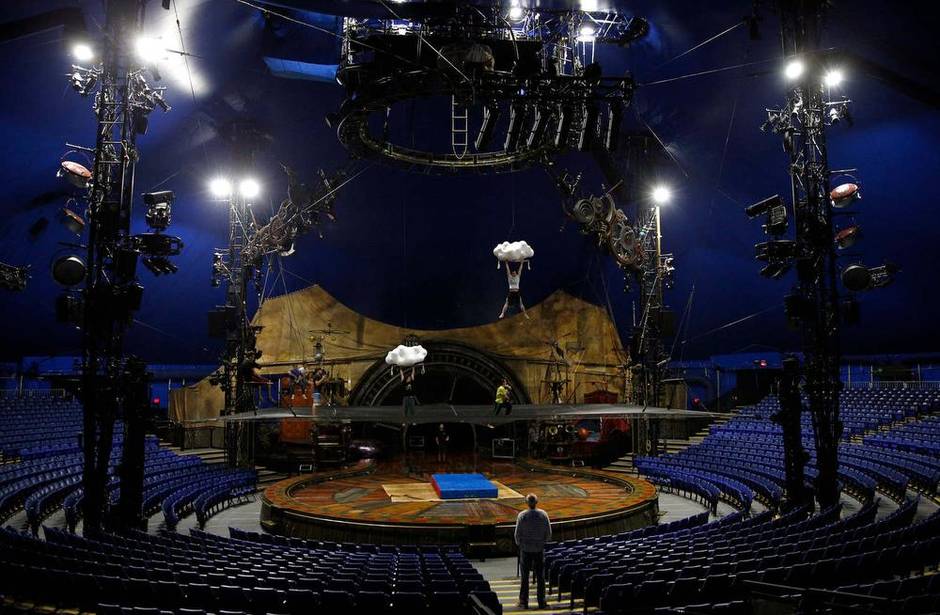 Acrobats perform during a rehearsal.

Her own performance is anything but ordinary – even on the days she has two shows, she will practise for an hour or two before curtain. “It’s never enough actually. There’s always more practice to do,” she says. Kaminska describes the music played by the seven-piece band as “gypsy jazz.” Along with electrical and mechanical sound effects – gears turning, clocks chiming, light bulbs buzzing – the musicians drive the show, even literally, conducting a locomotive around the audience.

Sixty per cent of the Kurios performers have been in a Cirque show before; many left ongoing productions, taking a reduced training salary for months because they wanted to contribute to something new. But, at least for Kaminska and Dennis, the hardest part of the job is maintaining relationships outside of the Cirque family. Kaminska has a husband who lives in Philadelphia. Dennis wants to settle down one day. “I think this will be my last show,” he says. “I want to stay here a few years, but then I want to go somewhere and do personal training and coaching.” 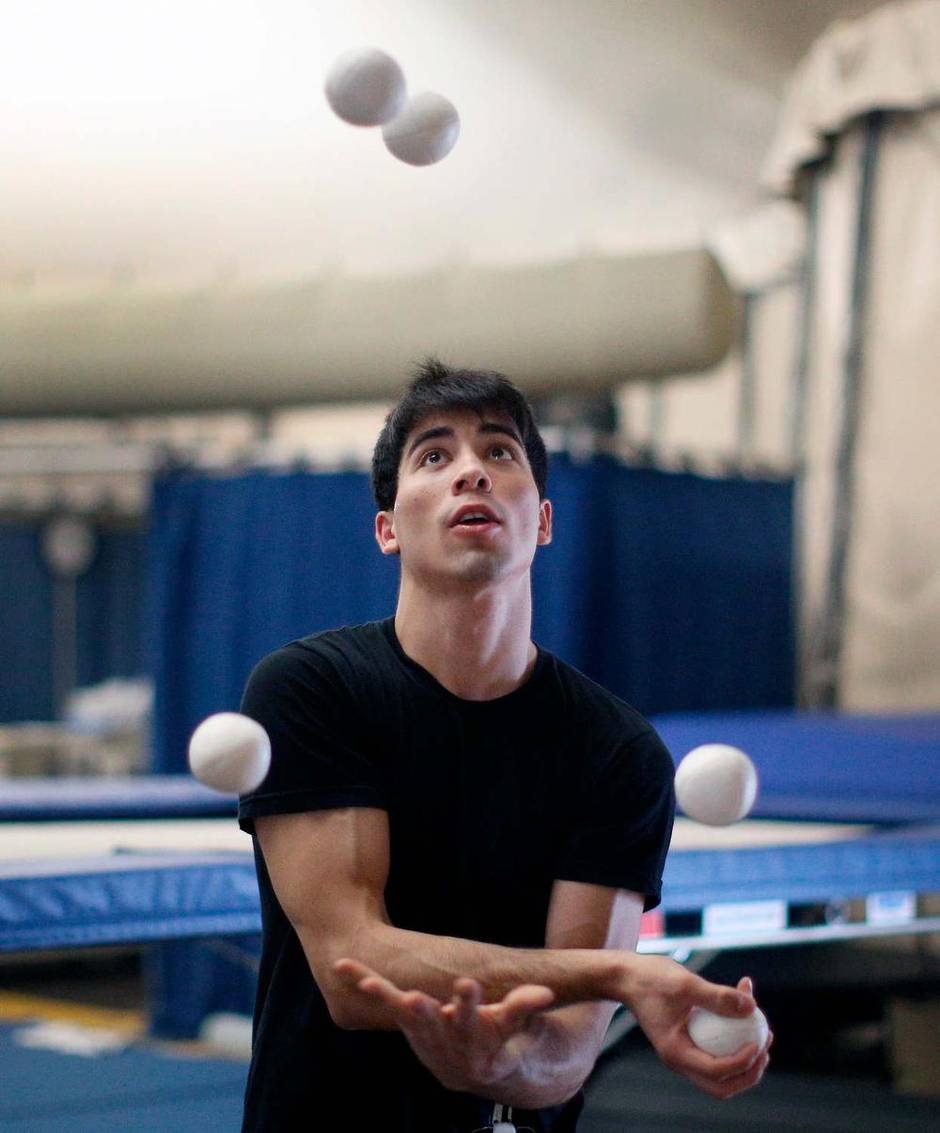 A juggler practices during a backstage rehearsal.

It’s also a job that is extremely taxing on the body. Ryan Murray, an American acrobat in the Acro Net act with Dennis, hurt a toe during morning rehearsal, and is sitting out today’s show, watching from backstage for the first time in some 80 performances. Greek singer Eirini Tornesaki, whose supernatural voice drives Kurios, is also sitting out her first show, to rest her vocal cords. It’s unfortunate timing; she is expecting a friend in the audience.

Laprise says these last few days in Montreal will be the hardest on everyone. They’ve been rehearsing since January, and opened in April without a real break – but there will be some rest time between upcoming stops on their two-year North American tour.

Work days might just be longest for British general stage manager Alan Parry. “Stage management, we’re the first in and we’re the last to leave,” he says. Parry joined Cirque 12 years ago as a stagehand, operating trap doors for the show Dralion, before working his way up the ranks. “It’s more than a job. It’s a life choice; I mean, we live on tour. For the last 10 years, I haven’t had a home anywhere,” he says. 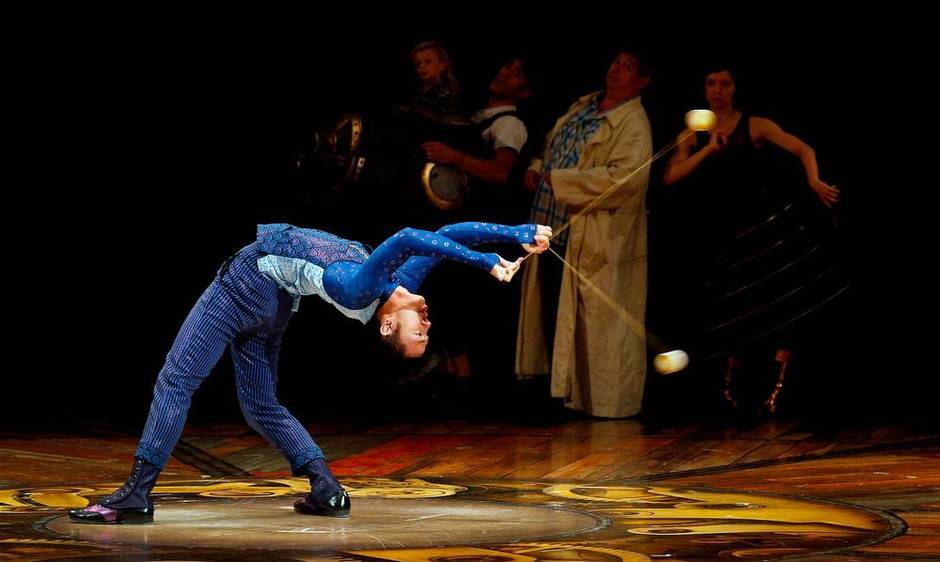 In Perry’s view, what makes Cirque unique is that the performers are involved with everything from applying their own makeup to executing set changes – including pedalling out the giant hand that is the performance pedestal for a group of contortionists who undulate like sparkling eels. 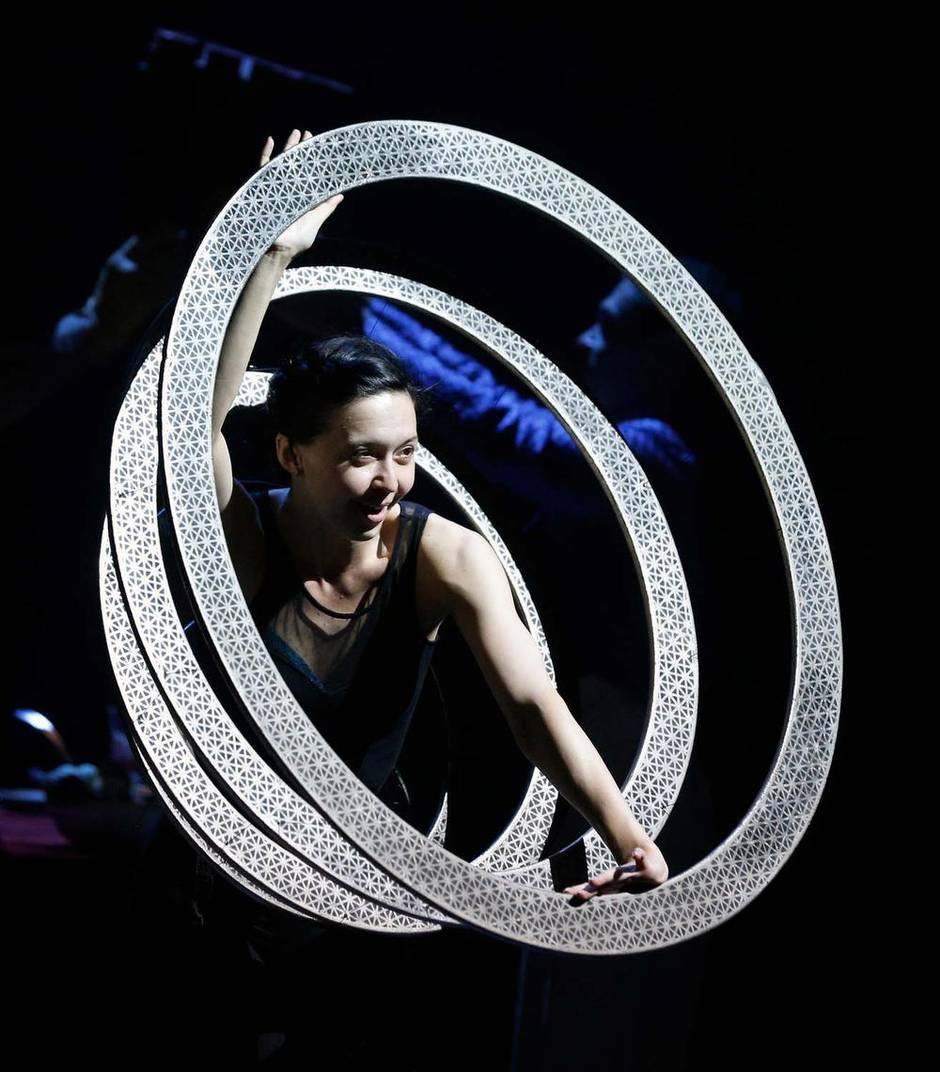 Laprise intentionally created a show around a mostly human cast of characters – that’s also different from other Cirque shows, which emphasize the mystical and imaginary. Of course, there are elements of both in Kurios – but it’s more about connection. “When you write a show that is going to last,” says Laprise, “you have to have a language that is universal, that is profoundly human.”

Kurios: Cabinet of Curiosities runs in Toronto from Aug. 28 to Oct. 26.