Whether it’s playing Schubert or dancing the tango, artistic expression has a tangible effect on the brain. A burgeoning field of research seeks to measure how we produce and experience the arts – and may even explain why we create them in the first place. Kate Taylor reports 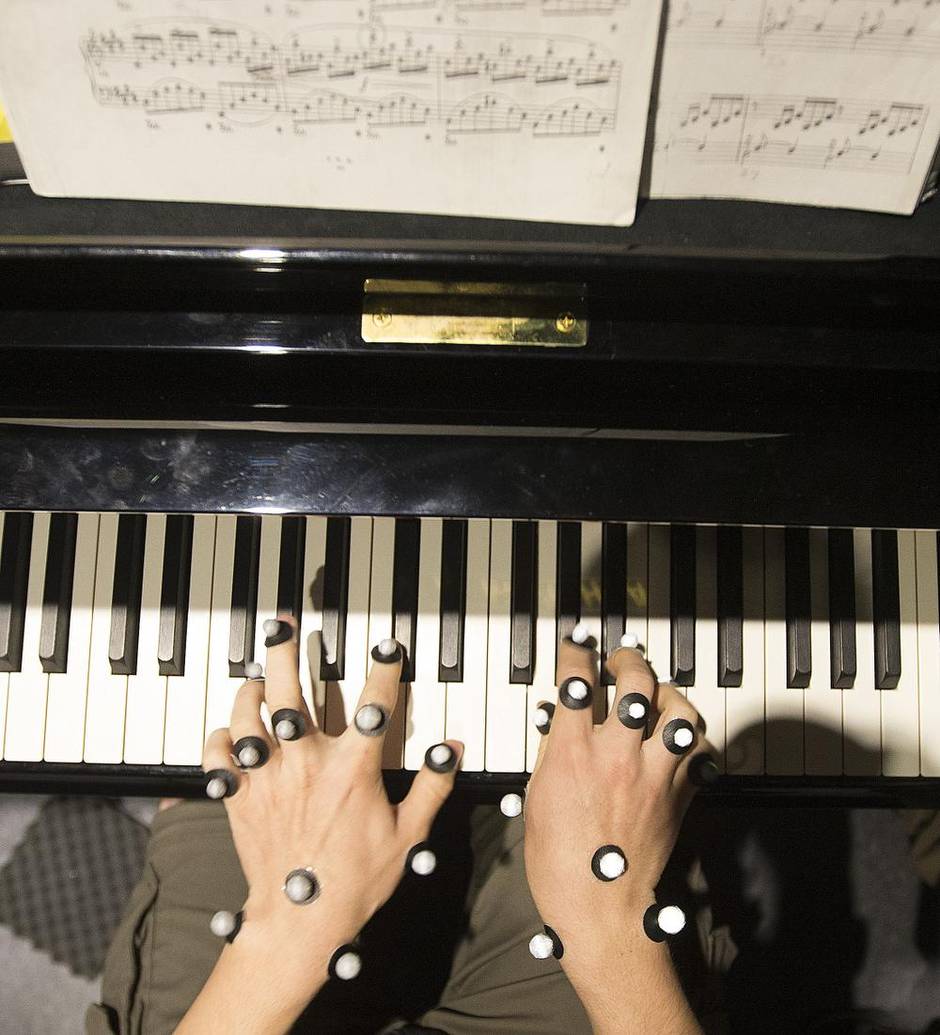 McMaster psychology PhD student Ye Yuan plays the piano in the university’s new LiveLAB with reflective markers for motion-capture attached to his hands. (Photos by Peter Power for The Globe and Mail)

Steven Brown must be the first person in the world to have danced the tango inside an MRI machine. Brown is an amateur dancer, but he is also a neuroscientist in the psychology department at McMaster University in Hamilton, Ont. He studies what goes on in the brain when it is engaged in the arts and, for his tango study, he wanted to see the differences between leading and following in partner dancing. He lay in the machine and danced with his arms, holding a partner’s hands outside it and leading her through her moves before they swapped roles. He found that the leading partner’s brain used more motor planning – the brain’s ability to plan and execute a physical task – while the following one showed more sensory activation, responding to the cues of touch and music.

His findings may not seem particularly surprising. They are, however, just one brick in an edifice of neurological, psychological and biological research that seeks to measure how humans produce and experience the arts – and may even explain why we create them in the first place.

“For me, all this leads to creativity. … I am trying to develop a neurological theory of the arts,” Brown said, explaining that he ultimately hopes to find common patterns of brain activity in different artistic disciplines. So far, he has done basic studies during dancing, drawing a picture, improvising a song and acting a role: His MRIs (magnetic resonance images) of actors, for example, showed less activity in the area of the brain believed to create personality when subjects were answering questions in character than when they were answering similar questions about their real selves. “It’s a loss of self,” he says of acting. “If you talk to an actor they often can’t put it into words. So, I look inside the box, and I’d say it’s like a possession.”

Does an actor, let alone a theatregoer, need to understand the brain activity associated with playing a role? It’s a tricky question as artistic communities become aware they are the subject of scientific scrutiny that might justify their existence as a biological imperative – or explain away their best inspirations as the convulsions of some overexcited neurons.

Theatre is pretty late to this party: The notion that the brain is doing all kinds of interesting gymnastics when listening to music is well established, popularized by McGill University professor Daniel Levitin and his best-selling 2006 book, This Is Your Brain on Music, in which he hypothesized music is a perceptual illusion in which the brain learns to impose structure on a sequence of sounds.

Levitin is the flag-bearer for a burgeoning field of research, much of it being done in Canada.

Those who do not come from artistic families often feel they have to justify what they do, especially if it doesn’t make much money, which is often the only measure of success. Here is a justification for their passion.
Daniel Levitin, McGill University professor and author of This Is Your Brain on Music

At McMaster, the psychology department’s Institute for Music and the Mind has just opened its LIVElab, a high-tech auditorium that can measure the brain waves, heart rate and sweat of performers and spectators. Brown hopes to study partner dancing there, using the same motion-capture technology that is used in animated films. Other researchers foresee using the lab to do everything from studying audience reaction in different acoustic environments to analyzing repetitive strain injuries in musicians, but nobody really expects the work to explain music itself. “The U.S. spends more on music than on pharmaceuticals,” says lab director Laurel Trainor. “To say it is a frill is a folly. How can it be if we invest so much in it?”

Since the 1990s, when Harvard psychologist Steven Pinker labelled music “auditory cheesecake,” a byproduct of other evolutionary developments that was fun but not necessary, researchers have debated its biological usefulness. Pinker’s critics believe music has precise evolutionary functions, arguing, for example, that music-making and rhythmic dancing might be signals to potential partners of sexual fitness, thus their particular importance to the adolescent male.

Meanwhile, a parallel debate about the purpose of fiction is being argued in literature and psychology departments. Rejecting the poststructuralist idea that the meaning of a text is not universal but determined by the individual reader, some English scholars such as the American Joseph Carroll and New Zealander Brian Boyd have argued that storytelling is an evolutionary refinement that helps people organize feelings and understand others. Similarly, psychologists such as Keith Oatley at the University of Toronto have argued fiction teaches empathy, and his colleagues are now setting out to test that premise. Raymond Mar, a neuroscientist and psychologist at York University, is working on studies that try to measure the impact of genre fiction on readers, testing their knowledge of authors’ names in various genres and then assessing their social awareness using tests first developed for autism. “Romance novels were the most robust predictor of interpersonal sensitivity,” Mar reports, cautioning the study only identifies a correlation, not a cause-and-effect. 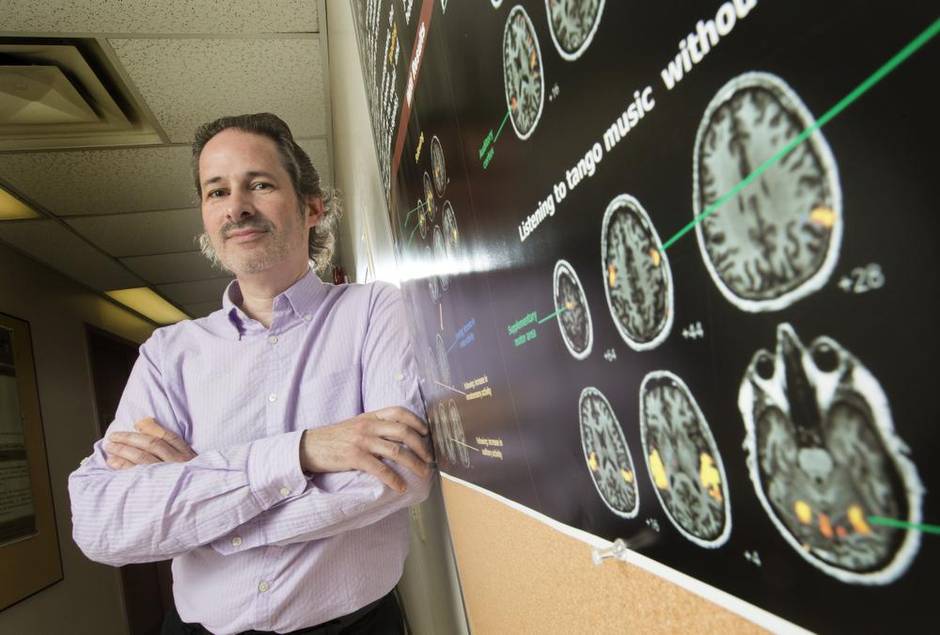 All of this work poses something of a conundrum for the people who actually produce art or literature. 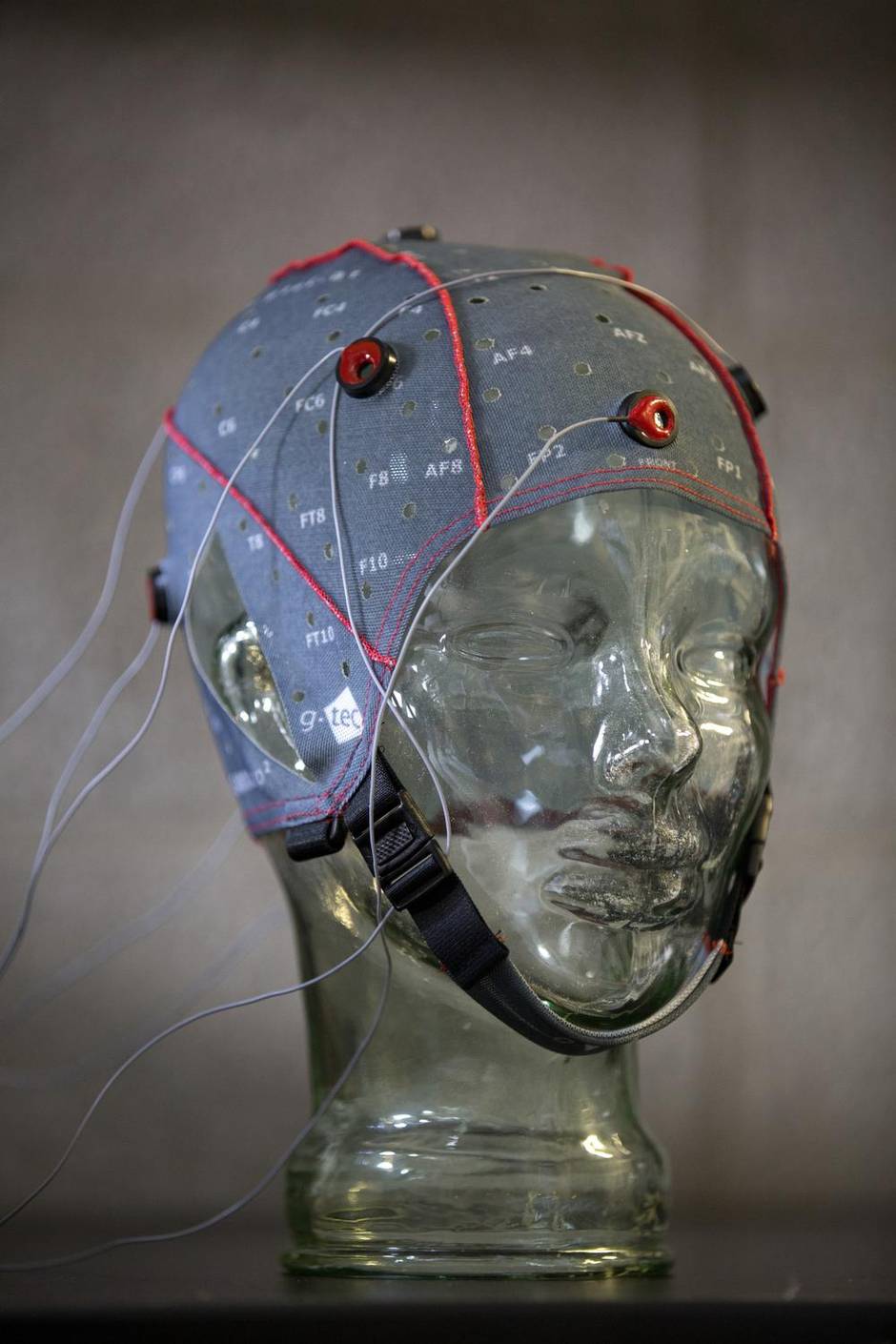 A cap that can be worn to collect data at the LiveLab at McMaster University.

On the one hand, it offers a compelling explanation for artistic activity.

“Painters and musicians love seeing there is a rational and scientific explanation for what they do,” Levitin said. “Those who do not come from artistic families often feel they have to justify what they do, especially if it doesn’t make much money, which is often the only measure of success. Here is a justification for their passion.”

On the other hand, scientific studies of artistic activity inevitably reduce it, and rather miss the point that the mysteriousness of art can be central to both its creation and its enjoyment.

“It’s like telling someone who is madly in love: ‘This is what’s happening in your brain.’ What does it have to do with being in love?” asks pianist Andrew Burashko, artistic director of Toronto’s Art of Time Ensemble.

Both neuroscientists and humanities scholars are well aware of these dangers. Mar cautions against concluding that an activity with biological roots is necessarily ancient; he thinks fields such as sociology and anthropology, which would include archeological finds of prehistoric musical instruments, offer stronger evidence that the arts are fundamental to humans. In turn, others acknowledge how quickly the idea of the arts or literature as intrinsic can reduce them.

“We have uneasiness about universalism, reductivism, even biological determinism. Yes, these are dangers, but let’s not throw the baby out with the bathwater,” says Melba Cuddy-Keane, a professor emeritus of English at the University of Toronto. A Virginia Woolf scholar who studies how descriptions of physical space in fiction work on the reader’s mind, she follows neuroscience closely and is part of a new cross-disciplinary group at the Jackman Humanities Institute that is looking at the uncritical embrace of the “neuroculture” trend. She argues the danger doesn’t lie in applying science to literary criticism, but in drawing sweeping conclusions.

“We have to be cautious of falling into the bootstrap position: ‘Read [fiction] because it’s good for you,’” she says of the fiction-builds-empathy argument. “Read it because response is good for you, and your response is up to you.”

It’s like telling someone who is madly in love: ‘This is what’s happening in your brain.’ What does it have to do with being in love?
Andrew Burashko, artistic director of Toronto’s Art of Time Ensemble.

Still, the notion that music, painting and literature are fulfilling ancient functions that make us human – and that science can prove it – could be very attractive to those who have spent a lifetime arguing that the arts should get more respect, and often rely on job-creation arguments.

“The neurological argument has something to do with what it takes the species to survive in changing conditions,” said Robert Sirman, the recently retired director of the Canada Council for the Arts. “I don’t want to fall back on a single argument for the arts … but I think attaching them to humanity rather than to part of the economic system is the future.”

He cautions, however, against the dangers of just swapping social utility for economic utility. The English philosopher Alain de Botton has been criticized for presenting art as a kind of social work, an idea articulated in his current show Art as Therapy at Toronto’s Art Gallery of Ontario, where paintings are analyzed for their ability to make us feel less lonely, escape our money worries or give us a break from our cynicism. Here, the idea that visual art should be immediately and obviously improving seems reductionist in the extreme.

On the other hand, the argument that artistic activity builds your brain has taken hold in the music world: In Toronto, the Royal Conservatory of Music (RCM) now advertises its services with research that shows how music improves cognitive abilities. Some of that research is being done in-house at the RCM where neuroscientist Sean Hutchins is testing preschoolers to see if their abilities to distinguish shapes, compare amounts and make out sounds are improved by music classes.

At McMaster, meanwhile, Brown is hoping to get Toronto’s Coleman Lemieux & Compagnie dance troupe into the LIVElab and wonders if he will see differences between the brain patterns of amateurs like himself and the pros. Still, no MRI or EEG (electroencephalograph) will have the last word: “The paradigms we can look at in the lab are simple compared to the richness of the arts.”