He was a Toronto-based television writer, one of the best of them. But the most superb of Denis McGrath's scripts was one he never put to paper.

The story involved a bulky, bighearted bachelor with a roaring laugh, collegial spirit and robustly expressed viewpoints. He was vivacious and had many friends, but without a companion he was never completely happy. That all changed in his 40s when he met a woman – a writer, as it happened – and fell with her into a deep relationship. A few years later he took her to New York, not divulging the purpose of the trip.

After checking into an extravagant hotel room overlooking Central Park, the couple took a drive north, arriving to a suburban house where the man had lived as a child. Lowering to one knee on the front lawn, the man, who never imagined he would get married, pulled out a ring and spoke at length about how he wanted their stories to come together forever.

She said yes to his proposal. The year was 2013. The man was Mr. McGrath; the story, a love story.

His marriage to Kim Coghill lasted a month shy of four years, until Mr. McGrath, 48, died on March 23, of pancreatic cancer. A native of New York but raised in Etobicoke, Ont., he was an accomplished screenwriter and a tireless advocate for Canadian-made television. A smart, quick and prolific writer, he was known for his sly humour and populist touch.

Mr. McGrath was a diehard rooter for the Toronto Blue Jays and a season-ticket holder to the team's games. During the 2016 season, Mr. McGrath was not only able to throw out a ceremonial first pitch at Rogers Centre, he also played cards against star Jose Bautista at a team event. He lost money on that occasion, a shortfall that was more than offset when he won a windfall 50-50 draw at the ballpark.

Though he was a long-time bachelor before marrying, he was never a loner. He convened poker games with his pals and enjoyed the writing-room camaraderie of such television series as the Winnipeg-based family comedy Less Than Kind, the Showcase sci-fi show Continuum and the CBC spy-thriller X Company.

"When he was working with a great group, where everyone got along, Denis couldn't be happier," said Trish McGrath, one of two sisters. "He'd found his tribe, and that's where he really thrived."

Mr. McGrath could often be found in one of the side booths at The Paddock Tavern, where bartenders indulged his guilty passion for girly cocktails. "It's writer nirvana," he told Blog TO in 2009. "Perfect for people watching."

Mr. McGrath held many opinions, but never kept them to himself for long. And although he could be cantankerous, it was accepted that he complained about the right things. In his capacity as councillor with the Writers Guild of Canada, Mr. McGrath helped negotiate contracts with producers.

"He was very good at calling out shenanigans when producers were saying things that didn't hold water," his friend and fellow screenwriter Alex Epstein told The Globe and Mail. "He spoke truth to power, and power didn't like that."

From 2005 to 2010, his passionate views on Canadian TV could be found on his popular industry blog Dead Things on Sticks, described by Globe television critic John Doyle as "thoughtful, learned and provocative."

For the 2007 miniseries Across the River to Motor City, Mr. McGrath won a Canadian Screenwriting Award and was nominated for two Geminis. In 2015 he was awarded the WGC's highest honour, the Writers Block Award.

But despite his busy career in television, Mr. McGrath's proudest moments were perhaps connected to Top Gun! The Musical, a parody of the 1986 Tom Cruise fighter-pilot blockbuster. With its book and lyrics written by Mr. McGrath, the backstage spoof was a hit at the 2002 Toronto Fringe Festival, and lived well beyond its premiere in various remounts.

The play made an appearance in 2004 at the inaugural New York Musical Theatre Festival. For the occasion, members of Mr. McGrath's family from Boston and New York came to see the larky-but-witty satire. "It was a charmed production," said his sister Trish, who was among those who convened to a restaurant afterward to celebrate. "It was a joyous, exuberant evening that brought us all together, and as happy as he was about the musical, he was more proud to give that special experience to the family."

Born Sept. 21, 1968, the son of Bronx natives Denis McGrath (a management executive) and charity organizer Anita McGrath (née Towey) cultivated his creative flair during a two-year period in the mid-1970s while the family lived in Orlando, home of SeaWorld, Universal Studios and Walt Disney World. "It was an incredible, idea-rich environment," his sister said. "It had a lifelong effect on his imagination."

As a boy, he frequently won public speaking contests, but he found achieving things with other people more satisfying. That sense of fellowship stayed with him all his life.

In 1977, the family settled in Etobicoke, a Toronto suburb. After graduating from Martingrove Collegiate Institute (where he struck up lifelong friendships with a creative crowd that included actor and screenwriter Mark Ellis), Mr. McGrath enrolled in the radio and television arts program at Ryerson Polytechnic University (where he would later return in a teaching position).

Upon graduation, he worked in television production. After helping to start up Space: The Imagination Station, Mr. McGrath completed a TV writing program at Norman Jewison's Canadian Film Centre.

If his skill as a screenwriter would earn him a living, it eventually helped him in his personal life as well. In 2003, his future wife was perusing an online dating site when she came across Mr. McGrath's photo – "I thought he was the cutest boy I'd ever seen" – and his stylishly written profile. "It was funny and smart and engaging," Ms. Coghill told The Globe.

The two enjoyed a dinner together, but Mr. McGrath cancelled a second date at the last minute.

Five years later, in 2008, with both of them working in television, Mr. McGrath and Ms. Coghill crossed paths again. The former incessantly flirted with the latter (who wasn't entirely sure the guy even remembered their first date) but didn't make any full-on advances.

Finally, in 2010, Ms. Coghill called him on the phone, telling him she had "boy problems" that she needed his help with.

What Mr. McGrath didn't know was that he was the boy problem. "I decided it was time to find out how he felt about me," Ms. Coghill said. Standing outside in the freezing rain in his shorts, Mr. McGrath spoke for two hours with his future wife. Soon afterward, they began dating, which led to their 2013 marriage.

In his Blog TO profile, Mr. McGrath had spoken about missed opportunities: He had passed on a possibility of writing for the hit American series The Wonder Years and later had failed to follow up on an opportunity to work with the prolific American director Jeremy Kagan, whose credits include The West Wing.

"I decided, if I ever got another break like that, I wasn't going to let it pass by," Mr. McGrath said then. "I look back, and I think the missed opportunities had purpose. I had to get past my fear."

His second chance with Ms. Coghill was a break that worked out smashingly for all concerned. Friends and family unanimously agree that Mr. McGrath was a sunnier man once he found a partner. His wife was just as pleased.

"Denis was everything I first saw in that online dating profile so many years ago," Ms. Coghill said. "He was smart and funny and loving and unfailingly kind and supportive to me and many other people."

Did she ever ask him why he had cancelled that second date years earlier? "He told me it was an emergency, something to do with a washing machine," Ms. Coghill recalled. "And I held it over his head at every opportunity."

One imagines Mr. McGrath wouldn't have had it any other way. After all, it made for a good story. 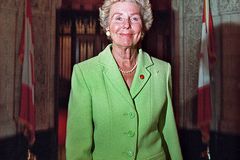