The day before I saw emerging painter Beth Stuart's new suite of paintings at ESP, a friend told me about a radio documentary she had heard wherein a physicist posited that, within a generation, technology will allow humans to penetrate whatever veils separate us from the multitude of parallel realities that surround our reality. Heady stuff.

Then, I saw Stuart's paintings, and I got a glimpse of what these future transitions might look like. The future looks bright (and lurid, and stringy, and prone to pregnant pauses). Bring on the transporter beams!

Stuart's presentation strategy is simple enough: She pairs non-figurative paintings featuring striated, patterned diagonals and lengths of gooey stretched shapes with paintings featuring large, solid and opaque blobs and impenetrable dark patches. She also cuts the tops of her canvases so that they tip ever-so-slightly inward, bend into each other. The paintings are arranged so that the space between the leaning canvases is minute, transitional.

The result is akin to two different (but related) worlds meeting, folding into each other, corner to corner; one world kinetic and skittish, in flux, the other hard and fixed, encased in dark ambers. The flow between the paintings is at times alarming, at other times soothing or simply baffling. But I would argue that it is the moment of transition, the cognitive and visual leap between the two types of depicted realities, that is the true hook here.

Maybe we won't need to bother with that forthcoming cross-reality highway (who could afford it?) We've already got Stuart to take us on the ride.

As the fabricator of choice for many of our international talents, Nicol's work is almost constantly on view, if only to the informed. (A note of explanation: Sometimes artists hire other artists to actually construct the work in their heads – writers use editors, after all.) And now it's time to take a good look at what Nicol makes for himself.

Nicol's new show at MKG127, entitled Hundreds of Things, is a hilariously sweet enacting of obsessive-compulsive habits, via the intertwined acts of collecting and assembling.

Beginning with the number 100, Nicol offers the viewer such off-kilter treats as Sculpture made with one hundred beard hairs, which is exactly what it says it is, and looks like a wire pot scrubber about to meet its last pot. Or, My name written one hundred times by people I've never met, a collection culled from addressed-to-Nicol packages, which, when mounted in a single frame, looks as if it was done by someone with dissociative identity disorder – one of whose "alters" has a keen sense of humour.

My favourite work is the set of four photographed sculptures made from Pringles chips – next time you look at a tube, you'll notice that the label advertises "100 chips in every can" – sculptures that layer the iconic, ovate chip shape vertically then horizontally, thus making a potato product weave, tuber macramé. The sculptures come in Regular, Sour Cream & Onion, Salt & Vinegar and Barbecue colours/flavours; a selection of hues/titles that, oddly, does not combine to equal 100 letters.

Also included are number games played out in different coloured inks, on grid paper, a metal sculpture that weighs – well, you can guess – and a tiny wall-mounted sculpture made from 100 corners cut off 100 exhibition invitations – corners cut to create a 100-degree angle between the vertical and the horizontal sides of the invite's rectangle.

Yes, this is a very clever show, but not obnoxiously clever. Nicol's work is infused with playfulness, and the accompanying information explains what each piece is made of, and/or how it was constructed. Usually this sort of high-concept assemblage is infused with a snotty lack of concern for viewer comprehension, but Nicol gives cold conceptual art a warm bear hug, and a nutty, chatty personality.

If you think you're too grown-up (or just too boring) to indulge in the frights of Halloween, award-winning photographer Fausta Facciponte's exhibition, Sleepy Eyes, will give you the autumnal creep-out you know you still crave.

Facciponte's subjects are vintage dolls, the kind with oversized eyes enhanced with mechanical lids that shut when the doll is horizontal. Dolls are curious toys to begin with – replicas of babies given to babies. But Facciponte turns the little nasties into full-blown monsters by photographing them in an unsentimental, head and shoulders, hot light style, as if they were convicts, and then printing the images in large formats, so that every tuft of plugged-in hair, every scraped off bit of flesh paint, and every insect leg-like eyelash is as big as your thumb.

Eek! These photographs ought to come with a warning: Do not look directly into the dolls' eyes, lest your soul be stolen.

As the accompanying essay explains, children invest dolls with extra-natural powers, especially the power to come alive, and then to listen. Facciponte's glaring ghouls carry all that original power (the dolls do seem to watch as one wanders the gallery) as well as a new, equally necromantic skill.

Lannoo's pensive colour-field explorations resemble the insides of prisms, the spiritual auras of trees, radiation trails, heat spectrums, oil spilled on water, and the core of the sun. Never a dull moment!

New works by abstract map-maker Djaballah, a painter who always gives you the right directions – that is, if you speak in tongues. If actual geographies were this polymorphous, we'd have world peace.

Multimedia artists Mustafa and Rashid collaborate once again to examine, via video, sculpture and installation, the ravaging aftershocks felt by minds exposed to violence and devastation. Bring the kids. Yes, really. 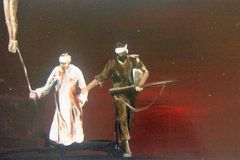 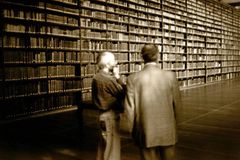 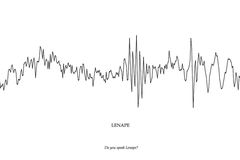 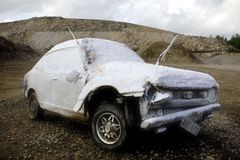