Evel Knievel was amazing. I'm just kind of a dirtbag.

This wisdom from America's stuntman sweetheart Johnny Knoxville to Jon Stewart last week. He was on The Daily Show to promote his new movie Jackass 3D, which, in addition to grossing $50-million (U.S.) on its first weekend (making it the second biggest opening of the year after Inception), also happened to be enjoying a private screening that night. At the Museum of Modern Art.

That's right, people. The man who once launched himself upside down in a feces-filled port-o-potty, rode a homemade rocket into a lake, skewered a friend through the cheek as bait for shark fishing and convinced a buddy to let a python attack his penis (disguised in a sock puppet at the time), is now being hailed as an artist - by everyone, it seems, except himself.

Josh Siegel, a curator at MoMA who organized the private member's screening, has described Knoxville and company's brand of comedy as "merely the climax - or the lowest depths, if you prefer - of a tradition that dates back to 1895, when the Lumière brothers drenched a poor sap with a garden hose and filmed it."

Spike Jonze (who was both one of the creators of the original show in 2000, as well as a producer on the movie) has described the Jackass franchise in high-minded terms, comparing it to the surrealist performance art of Luis Bunuel. "Just the way it was put on TV without any host, without any context. It has no explanation for being. It just is." Even Jon Stewart, a master of cutting cultural imposters down to size, compared Knoxville and his gang to Buster Keaton and the classics of vaudeville - a compliment which, when it comes from a comedian, is tantamount to being awarded the Nobel prize for humour, if there was such a thing.

But thankfully, there isn't.

Imagining that Jackass 3D is a heady mixture of post-modern performance art, Dadaism and Bertolt Brecht's Theatre of Alienation, might make us feel better about taking our teenage nephew to see it on a Friday night after sushi, but it doesn't make it anything other than what it is: good old-fashioned toilet humour mixed with violence. The high-production-value equivalent of Charlie Bit Me on YouTube.

I have no problem with people trying to make themselves seem smarter than they are (it's human nature after all), but I do have a problem with pretentious twits ruining good plain fun. As a dish, trash like Jackass is much more delicious when served up simply - greasy fish and chips in a newsprint cone - than garnished with parsley and fussed over on a silver platter.

You don't see more recent reality fare such as Jersey Shore and it's U.K. equivalent The Only Way Is Essex (England's fake-nailed answer to the residents of Jersey) critically gushed over in the same way. But make no mistake MoMA film-club members: Knoxville has more in common with Snooki and the tanorexic wideboys from the burbs of London than he does with Antonin Artaud.

The difference, of course, is that while the Jackass boys are self-acknowledged idiots (a difficult label to avoid when one is paid to put toy cars up one's bum), the beauty therapists bejewelling their bikini lines (a.k.a. vajazzling!) on The Only Way Is Essex have no idea the joke is on them.

In the pilot episode of Essex (which recently premiered in Britain and can be viewed on the iTV website), two Baby Spice doppelgangers, Amy and Sam, discuss the fact that the term "Essex girl" is actually in the dictionary. Amy is fascinated by this information. "What does it say?" she demands. "Glamorous, classy…?"

Amy thinks about it for a moment. "Well, where's the man from who wrote the dictionary?" Sam admits she doesn't know. Amy's false eyelashes spring open. "Cos if he's from Liverpool or Manchester, or wherever, that explains it. If he was from Essex, he wouldn't be saying that."

It's an exchange of such innocent postmodern self-reference - heartbreakingly idiotic and undeniable true - that it almost makes you want to proclaim the show high art. And I would, if it weren't such scrumptious trash.

So what is it that makes stupid humans doing stupid stuff - whether it's English girls getting tramp stamps or American boys rollerskating in the path of an enraged bull - such addictive viewing?

If I were a member of the MoMA film club, I might put it down to Joseph Conrad's notion of the fascination of the abomination. But in the interest of fun, I'll have to side with Knoxville. No point in intellectualizing it: The guy's just kind of a dirtbag. 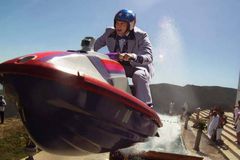