Can you like watching Jordan Belfort without liking Jordan Belfort? This is the question raised by Martin Scorsese's The Wolf of Wall Street, an unrepentant, nose-to-the-blow, inside out wallow in the dirtbag psyche of a based-on-real-life stockbroker who bilked millions from unsuspecting investors. The movie has divided people violently: some loving it for its deliriously excessive takedown of white-collar sociopathy, others hating it for making a loveable rock star (played by a fiercely fun-having Leonardo DiCaprio) out of a heartless bastard. And for leaving his ample collateral carnage – the victims – off-screen, much as Belfort's own strategically selective conscience most certainly did.

Funny that it's a question we ask of movies, because we don't seem to hold TV to the same standard of uplift: Scorsese's Belfort arrived at the end of the same year that Breaking Bad's self-made meth-making master chef Walter White went out in a blaze of never-say-sorry glory, but few suggested Walter's story was lacking for a balanced depiction of the victims of his pharmacological finesse.

But Scorsese's been here before. With Robert De Niro, he created some of modern American cinema's most indelible creeps: Johnny Boy in Mean Streets, Travis Bickle in Taxi Driver, Jake LaMotta in Raging Bull, Rupert Pupkin in The King of Comedy, Max Cady in Cape Fear, Jimmy Conway in Goodfellas. Perhaps because the wounds of 2008 are still too fresh, or maybe because Leonardo DiCaprio is too pretty, Scorsese's latest scumbag is taking a drubbing.

The fact remains, however, that Jordan Belfort comes from a long line of charismatic movie jerks. Here's a list of the most malodorous, excluding Scorsese's inestimable contributions to the tradition.

McTeague (Greed, Erich von Stroheim, 1924): When a lottery intrudes upon his life of humble, hard-working and contented routine, the hulking gentle giant of a dentist McTeague (Gibson Gowland) becomes a full-on alcoholic monster of sheer, rapacious, soul-destroying self-interest. He dies in a desert, pockets empty, handcuffed to the man he killed.

Scarlett O'Hara (Gone With the Wind, Victor Fleming, 1939): The reason Rhett Butler didn't give a damn. Frankly, Scarlett, you're a piece of work so wicked men were safer in Gettysburg.

Charles Foster Kane (Citizen Kane, Orson Welles, 1941): The movie many consider the greatest ever made is about a spoiled rich brat who makes millions out of lying to the American public for fun and profit. Not dated a bit, in other words.

Daffy Duck: He's vain, paranoid, grandiose, cowardly, resentful, duplicitous and greedy, and possesses a lisp that would irrigate Death Valley. Not even Wile E. Coyote would return his calls.

Fred C. Dobbs (The Treasure of the Sierra Madre, John Huston, 1948): In one of his greatest roles, Humphrey Bogart played a down-on-his-luck neophyte prospector so stricken by gold fever the mountains gave it up just so he'd leave them alone and go home.

Ethan Edwards (The Searchers, John Ford, 1956): Racist, vengeful and relentless, John Wayne's character in John Ford's most enduringly divisive movie is the definitive man-from-the-wilderness who brings the beast wherever he goes. No wonder the door closes on him at the end.

Scottie Ferguson (Vertigo, Alfred Hitchcock, 1958): After falling for the dead wife of the man who hired him to follow her, James Stewart's acrophobic former police investigator becomes a necrophiliac stalker with malevolent Henry Higgins tendencies.

Hud Bannon (Hud, Martin Ritt, 1963): The prettiest bastard in the history of American movies, Paul Newman's cattle-ranch stud is actually nicer to the herd than he is to people, and the herd he slaughters.

Paul (Last Tango in Paris, Bernardo Bertolucci, 1972): Using his utmost Method powers as an excavation tool, Marlon Brando pulled a monster out of his soul that anticipated The Exorcist by a year.

Michael Corleone (The Godfather, Parts I&II, Francis Ford Coppola, 1972-4): Marlon Brando's son in more ways than one, Michael Corleone – the youngest of Brando's Don Vito's brood – is the ultimate slow-burn movie bastard, a man who has so meticulously rationalized evil as the only reasonable behaviour he knows that he really does believe he's doing it for the family. Pity the poor family.

Daniel Plainview (There Will Be Blood, P.T. Anderson, 2007): A kind of one-man compendium of the entire tradition of American-movie bastardy, the protagonist (played by Daniel Day-Lewis) of P.T. Anderson's epic opera of black gold fever combines McTeague, Fred C. Dobbs, Charles Foster Kane and Ethan Edwards into a single avatar of utterly abject greed, obsession, hatred and paranoid isolation. The desert is his medium, salvation and natural habitat, the snakes his closest kin. 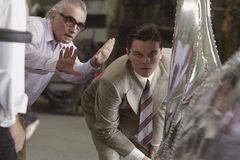 Dreamers are everywhere at the movies this holiday season
December 26, 2013 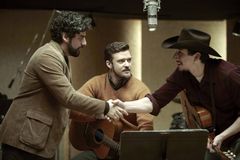