When Pete and Joey drove down the road from Cape Breton to Toronto in their Chevy Impala (hand-painted flames on the front hood), Canadian cinema followed. The 1970 film Goin' Down The Road was as much a landmark for new Canadian filmmaking as Bonnie & Clyde and Midnight Cowboy was for Hollywood.

In the 40 years since, fans might have been speculated on what happened to Pete and Joey. Now, the original film's director Don Shebib has made a belated sequel, Down the Road Again, in which Pete (played by veteran Canadian actor Doug McGrath) retraces a secret about his deceased friend Joey (played in the original by Paul Bradley). The movie opened on Friday.

Joey's spirit remains in the sequel. Completing Down the Road Again was also the dream of celebrated Canadian actress Cayle Chernin, who played Pete's girlfriend in the first film and appears in this one – although she died before it was finished.

What results is not only a nostalgia trip for fans of the original, but also for the film's creators. As McGrath explains, though, the sequel has also given him a new lease on life late in his career.

What were your thoughts returning to this story after all these years?

We had been waiting for this for some time, so I guess what was in my mind was: 'Finally.' I'd been aware it was in progress, because Cayle Chernin had been pushing it for years. And so I knew that she had finally got Don on board to do something. He told me he sat down and wrote the script. She had brought him some ideas.

Was there a sense of nostalgia on set?

I had become a very close friend of Paul Bradley, although we didn't function very well together because he had a whole different lifestyle. But I had acquired such a great respect for him. And we really had established, I guess you'd call it, a spiritual contact. He knew when I'd come to town. I'd left Toronto in the years after the original film and went to California, and if I'd show up somewhere in Canada, he'd show up. We maintained that kind of contact, because we'd established a very close tie preparing for the original film. And re-establishing a closer friendship with Cayle and Jayne and Don, that brought back some thoughts about those days and what was happening then. That brought about a lot of nostalgic feelings.

What was happening back in those days?

I had come back from America in late '65, I guess. And I heard about Eli Rill's acting studio, a Toronto version of New York's famous Actors Studio. So I started there in 1966, and Cayle was there. She was this little sweet 15- or 16-year-old. And these young actors were really developing things, and then a few years later came Goin' Down The Road. That period of time was exciting in Canada.

You mention that you and Bradley had 'different lifestyles.' How were you two different in real life?

He lived pretty close to the street – not on the street, but pretty close to it. He certainly drank a lot. Maybe there was a great sense of disappointment in him that it didn't happen, didn't go further, especially with the great talent he had. He needed more of a team around him, to help him perhaps.

Whereas you were more of a stable career actor?

[He laughs.]Relatively speaking, I was a bit more stable, and I had other things happening in my life. That's the difference. I was working and became more involved in my own personal development and my spiritual development.

People will inevitably describe the original film and this sequel as bookends to your career. Are they?

I've noticed such a great change in my own thinking, even in the last couple of months. All of a sudden I've started to be a lot more talkative. I went to a couple of auditions, and all of a sudden, I'm doing this funny stuff. [He laughs.]And I don't know where it's going to go. So one of the things is that I would really like to get back on the stage. I'm very eager to get out to more auditions to see where this freedom will take me.

40 years later, sequel to classic buddy flick Goin' Down the Road is under way
November 3, 2010 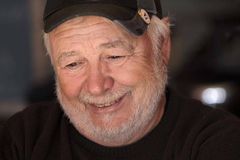