When Tony Asimakopoulos went into rehab to purge himself of his heroin habit more than 15 years ago, the last things on his mind were his mom and dad.

"Going into detox, that recovery period, it's a time when you are very focused on yourself," Asimakopoulos says. "You're not thinking about the impact your addiction has had on others."

That also led to a self-imposed exile for Asimakopoulos, who fled to Ottawa for treatment and re-entering the workforce, and then to Toronto. When he moved back to Montreal about seven years ago, there was a profound reconnection with his family, and the realization that his drug habit had left deep emotional scars on his parents – Greek immigrants with an only child.

Asimakopoulos also realized this personal, intimate, wrenching story would make for a powerful documentary film. The result is Fortunate Son, an often harrowing, occasionally uplifting feature documentary about Asimakopoulos's not-so-sentimental journey from being a star film student at Concordia University, where he made two award-winning short films, to the desperation of cocaine and heroin addiction – all told through the eyes of his bewildered, heartbroken parents.

As he embarked on the film, Asimakopoulos had one question hanging over his head.

Would his quiet, reserved, private parents agree to have the camera turned on them, almost constantly, for at least a couple of years, as they explored their tortured history?

"That wasn't as hard as I thought it might be," he recalls. "I basically told them it would be part of recovery, that it would be good for all of us to go over what had happened. They agreed on the basis of that argument. They saw the value in telling the story."

Asimakopoulos had already shared his own story on screen in some detail, in the 1997 documentary Confessions of a Rabid Dog. In that film, director John L'Ecuyer (himself a recovered addict) follows several former heroin users around, as they discuss their recovery and re-entry into sane, substance-free living.

But Asimakopoulos wasn't quite prepared for what would unfold during the shooting of Fortunate Son. "I knew this had a terrible toll on my parents," he recalls. "But I guess I wasn't prepared for the extent of it. On the first day of shooting, we filmed us all having dinner together. My father turned to me and said, 'You have no idea what you put us through. I thought about jumping off a bridge when I realized what you were doing.'"

The film includes such harsh emotional moments, including mom and dad describing, in excruciating detail, their finding needles and other drug paraphernalia in the house – leading them to conclude, beyond any doubt, that their son was a junkie.

Asimakopoulos says he had to process staggering feelings of guilt as the shoot went on. It also helped him understand how his upbringing had helped him to overcome his addiction. "I think it made me realize the extent to which I actually have trouble enjoying life. And I think that says something about the root of addiction. If you don't take pleasure in things, you're going to have to look for some other way to do it. My mother gave me enough love that ending my life would have been a very difficult thing to do. I think I had enough love to give me what I needed to get out of the habit."

The family dynamic in Fortunate Son adds a dimension as Asimakopoulos explores his relationship with his girlfriend Natalie, as the two begin to make plans to wed. But despite this uplifting additional storyline, Asimakopoulos says he found making the film depressing and anxiety-inducing.

"At festival screenings, people will ask how cathartic the experience of making the film was," he says. "It wasn't at all. It was therapeutic only in that it kept me close to my parents. For me, it added a lot of stress to my life, and was potentially damaging. I think of it as therapy for other people."

He did show a cut of the film to his parents when it was almost finished. He said they bickered throughout the film – a conversation he recorded and intends to make into a commentary track on the DVD.

"I don't think I'm ever going to make another documentary, though," he says. "It's too much outside of my own personality – there's no control. I didn't know when to turn off the camera. Fiction has boundaries, even the most chaotic ones, but verité-style documentaries usually don't."

Fortunate Son opens at the Carlton in Toronto on Aug. 17. 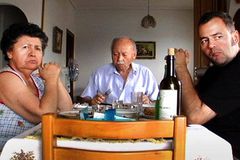