When veteran actor Christopher Plummer accepts a lifetime-achievement award from the Academy of Canadian Cinema and Television in March, he plans to tell the audience this country is lucky to have a film industry. Television viewers may prefer the Oscars to the Canadian Screen Awards, industry insiders may complain they can't penetrate a domestic market dominated by Hollywood, but at the age of 87, Plummer takes a much longer view.

"It was a hard-fought battle to get Canadians interested in the arts at all," he said in a recent interview, recalling the start of his career taking unpaid work on the Montreal theatre scene in the 1950s. "Finally, Canada became proud of its own people and that indifference to the arts began to disappear. … At last, we have an industry, thank God. It took so long."

The gratitude is mutual: The academy will announce on Tuesday that it will present Plummer with its lifetime achievement award during its CBC telecast on March 12.

Growing up in Montreal, Plummer was a poor student who found his calling in high-school theatre. He was playing Mr. Darcy in a production of Pride and Prejudice when he was discovered by Herbert Whittaker, the critic for the Montreal Gazette and later The Globe and Mail, who raved about his performance and encouraged him to join the Montreal Repertory Theatre. Canadian theatre was largely amateur in those days; to make a career of it, Plummer went abroad. He made his Broadway debut in 1954, and his Hollywood debut in 1958, in Sidney Lumet's Stage Struck, and was soon appearing in London's West End.

But it would be unfair to say he never looked back. The actor, who won his first Tony for the musical Cyrano in 1974 and an Oscar for Beginners in 2012, has always maintained links to Canadian theatre and film, and has particularly strengthened them in his later years. He appeared regularly at the Stratford Festival in the 1950s and 1960s, considering the title role in a bilingual production of Henry V, one of his favourites. After a long absence, he returned there to play the title role in King Lear in 2002 and Prospero in The Tempest in 2010. The many meaty screen roles he has been assigned in his 80s include the forgetful Holocaust survivor in Atom Egoyan's 2015 film Remember.

"How else are you going to learn unless you are pitted against the best of another country?" he says, speculating that if he were starting out today he could have had an international career while still living here. (He now lives in Connecticut.) "Then you come back and bring what you have learned. I hoped for an international career, but I might have stayed in Canada. I love Canada."

He attributes his professional longevity to his wife's cooking – quite seriously. He married the British actress Elaine Taylor in 1970 and credits her with keeping him healthy with low-fat meals and a no-hard-liquor policy.

"When we got married, she made me stop the hard stuff. I drink gallons of wine, but I don't do the vodka, the tequila and the scotch any more. … If it hadn't been for her, I might have croaked ages ago."

In his 2008 memoir, In Spite of Myself, he chronicled his early days of hard drinking and backstage hijinks. Today, he says he likes to watch others drink a martini, to savour the experience without the booze.

Appropriately, his youthful idol was the glamorously alcoholic John Barrymore, and he went on to play the American stage legend in Barrymore, a one-man show produced in Canada that transferred to Broadway in 1997 – before it was adapted for film in 2011: alongside his Tony-nominated King Lear, he counts it as one of his favourite roles. Another is Cyrano, on Broadway back in 1974. Although he won Tonys for both it and Barrymore, he says he has actually had the most fun appearing in flops: "You can joke about it and if you have a sense of humour about your failures, then you're saved. I've learned a lot from the mistakes."

As for his work on-screen, he patiently acknowledges that people will always associate him with the role of Captain Von Trapp, the whistle-blowing domestic martinet made over by Julie Andrews' Maria in The Sound of Music – because that 1965 musical remains so beloved. But he did not like the narrow character nor his own work in the film and believes his movie career was rescued playing Rudyard Kipling in The Man Who Would be King in 1975.

"It was not a huge role, but a nice role, Kipling, and it made me a character actor, and from then on I got much more interesting roles."

He remains extremely busy in film, recently shooting a new comedy, Boundaries, in Vancouver. "I have just finished my fourth film in a year, which is actually silly, I should have at least said no to one of them," he said. Having played all the major roles in Shakespeare, he has no new ambitions in that direction – other than to keep touring with Shakespeare and Music, his solo show of Shakespearean texts set to music, which he revived in Ottawa last summer and now hopes to take to Toronto and New York.

Perhaps what keeps him going, along with healthy living, is his approach to the characters he plays, some heroes, lots of villains and many things in between: "I always try desperately to be different each time; I would hate to be the kind of 'movie star' that is always the same. " 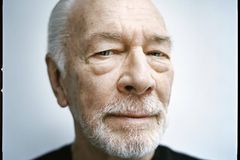 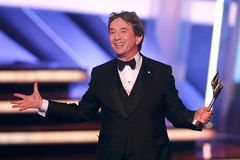