The world now knows that Disney had a $50-million (U.S.) insurance policy from Lloyd's of London on Carrie Fisher, who died Dec. 27 in the midst of a three-film contract for the insanely lucrative Star Wars franchise. (Episode VII: The Force Awakens, which came out in 2015, raked in more than $2-billion worldwide, and Fisher's work on Episode VIII, to come out this December, was already completed.) According to Insurance Insider, which first reported the news, it is the largest single personal-accident insurance claim ever.

The big question is, what will Disney do with the money? Will they spend it on a new script for Episode IX, to be directed by Colin Trevorrow? Will that script figure out a way to kill Fisher's character, formerly Princess Leia, now General Organa, discreetly and offscreen? After all, Trevorrow did tweet, on the day of Fisher's death, a silhouette of Leia with the word "Always," implying his respect of her singularity.

Perhaps Disney and Trevorrow will employ just enough CGI to kill Leia on camera, and then let her rest in peace? As everyone who's seen the Star Wars prequel Rogue One knows (spoiler alert), Disney did this with both Leia – digitally mashing Fisher's younger face onto another actress for a pivotal moment at the end – and Grand Moff Tarkin, digitally imposing the late Peter Cushing's face (he died in 1994) onto another actor for several scenes.

Or will Disney leave Episode IX' s script as is (reportedly, Fisher has a large role), and give us a CGI Leia throughout? It's not yet known if Fisher had stipulated rules for the use of her likeness, as Robin Williams did before he died by suicide in 2014, banning any use of his likeness for commercial means until 2039. But she was well aware of the golden chains that bound her to Star Wars creator George Lucas.

Thinking through all the implications of this story is like unpacking a suitcase full of thorn bushes.

On the one hand, the Star Wars franchise has always been about the technological advancement of cinema. Many would argue that the future is digital, and they might as well be early adopters.

Digital recreations and redeployment of unused footage are already all around us, and have been, back to the (terrible) Trail of the Pink Panther in 1982, which resurrected Peter Sellers from his grave via scenes cut from previous instalments. Arnold Schwarzenegger's younger face returned for Terminator Genisys. Oliver Reed (Gladiator), Paul Walker (Furious 7) and Brandon Lee (The Crow) died before their films were completed; old and digital footage was used to finish them.

In California, the use of people's likeness lies in the hands of their heirs, who receive hefty payouts, and other states are increasingly adopting that legislation. (Minnesota, for example, got into the game after Prince's death last year.) Because families are not always warm and fuzzy, many stars are doing what Williams did, locking down their images legally before they die. All this is happening, and will continue to happen, whether we like it or not.

But should it happen with Fisher? The Twitterverse mostly says no; the words "creepy" and "disrespectful" pop up a lot. It's one thing to recreate a minor character for a few pivotal scenes, or a major character for a key moment; or to revive a deceased actor to finish a project that's nearly done. It's quite another to have the dead roaming the screen for 150 minutes in a brand-new work.

Personally, I loathe CGI characters – they always look eerie, and they throw me out of the story. To move us, a film demands a significant suspension of disbelief. It has to feel real, even though we know it's faked. As sophisticated as current technology is, it's not there yet.

But as Lucas has proved, both as director and producer, he's not averse to using technology before it's ready (see: Star Wars: Episode I, II, or III). And I've read a few chilling tweets from parents who swear their kids had no idea that Cushing and Fisher's faces weren't real in Rogue One. If the kids don't care, Disney sure won't.

As in all things Hollywood, it will come down to love versus money. For all their affection (genuine, I'm sure) for Fisher, Lucasfilm and the Disney team knew that her health was volatile, and were hard-headed enough to take out that insurance policy. For all their respect for their fans (genuine-ish), they're still going to do the math.

Like the Harry Potter franchise, the Star Wars franchise is that rare bird: a sure thing. People are going to flock to Episode VIII and IX, no matter what they do with Leia (and also to see what they do with her). Disney and the producers' choice is clear: They will do what they determine will best serve and extend the franchise, while earning them the most obscene amount of coin.

Star Wars may be about good versus evil. But in Hollywood, in the battle between morals and money, money always wins.

Reynolds and Fisher up and down in life, together in death
December 29, 2016 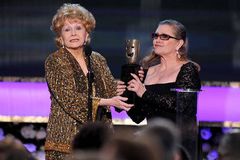 No one could make us laugh through pain like Carrie Fisher
December 27, 2016
Follow Johanna Schneller on Twitter @JoSchneller
Report an error Editorial code of conduct
Due to technical reasons, we have temporarily removed commenting from our articles. We hope to have this fixed soon. Thank you for your patience. If you are looking to give feedback on our new site, please send it along to feedback@globeandmail.com. If you want to write a letter to the editor, please forward to letters@globeandmail.com.
Comments