Amy Schumer knows her moment can’t last forever. As the star of one of the summer’s most anticipated films, the creator of a genuine television phenomenon and poster girl for whatever movement wants to co-opt her this week, the comedian finds herself in a sort of Hollywood Catch-22: if she truly breaks through to the mainstream, she risks softening the hilarious but jagged edges that made her so unique to begin with.

“I know my days are numbered, but it’s so out of my hands,” Schumer says in an interview with The Globe, bemoaning not just her ever-shifting spot on the cultural index, but the fact that seemingly everyone has an opinion about her every move (just witness this week’s flare-up over her Princess Leia-licking-C-3PO GQ cover). “I’ve seen the things that my friends have gotten in trouble for. It actually makes me a little indignant, and pushes myself to be even more honest to say what I want. I’m doing this in the first place because I have something to say. I’ve always been this way, and I’m not going to change now.”

Schumer may not have a choice. With her new movie, Trainwreck, opening in theatres this weekend, the actress and comedian will be top of mind come Monday morning, no matter how well the film fares at the box office: If it succeeds, she’ll be hoisted up as a new feminist icon, a provocative and brilliant comedian who is deconstructing gender roles and is a beacon of hope to the next generation of young women. If it flops, her career will be dissected within an inch of its life, with everyone struggling to figure out how a progressive, complex comedian was once again reduced by the powers that be to just another woman who tells dirty sex jokes. 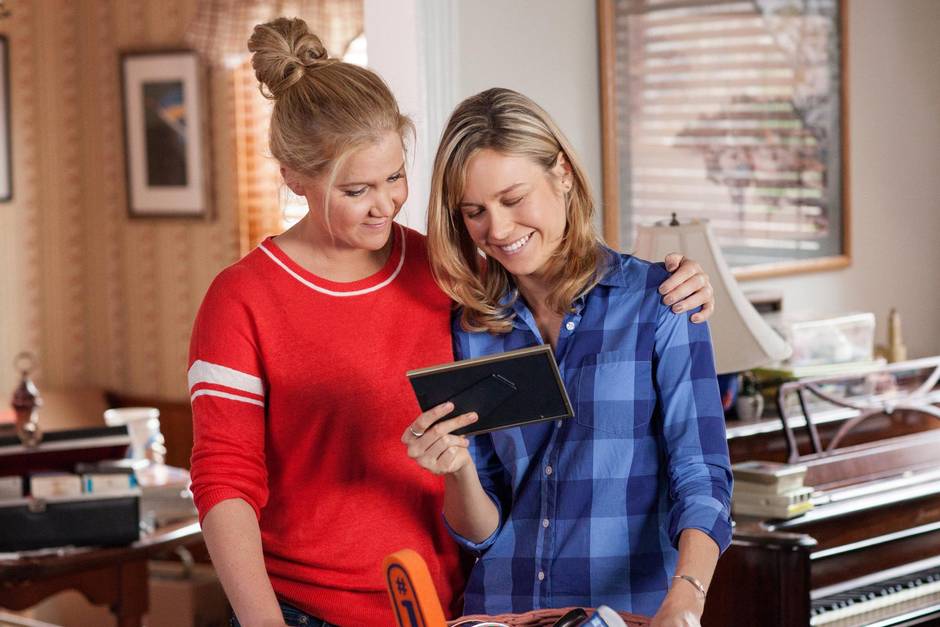 This photo provided by Universal Pictures shows, Amy Schumer as Amy, and Brie Larson as Kim, in"Trainwreck," the new comedy from director/producer Judd Apatow. The movie releases in the U.S. on July 17, 2015. (Mary Cybulski/Universal Pictures via AP)

Comedian Dave Attell, a long-time friend of Schumer’s who has a brief role Trainwreck, puts the dilemma best: “Amy is at that point where I consider her on the verge of becoming a great comic, but the unfortunate thing is that she’s so good at what she’s doing that she’s going to become a role model, and that means the death of everything funny,” he says. “Amy is a special person and this movie will lead to more success, but I just hope it doesn’t water down her process, because there is so much funny in her.”

On that last part, at least, there is no doubt. But many funny women have come before her, too, only to find themselves on the wrong side of the perceived cultural lines of what’s deemed acceptable, or even likeable. Just ask Sarah Silverman, Melissa McCarthy or Chelsea Handler: Women who embrace raunch, or at least the less delicate sides of comedy, are destined to endure a career under a microscope. Schumer seems prepared for the critical onslaught, or is at least game for the challenge. “It’s strange and overwhelming to have no control over it. It’s nerve-racking: When are they going to find some huge piece of evidence to burn me at the stake?” she says. “I think people coming at me with hate is inevitable – but then I get to complain about it, which is great!”

It’s a confidence you won’t find among Hollywood’s typically wary up-and-comers, which makes sense: Schumer is far from a conventional movie star. A 34-year-old comic who has only played small roles (“Woman #1,” for instance) in the few films she’s been in, Schumer is enjoying a remarkable ascent – even if it’s only being sold that way. Yes, Schumer has little acting experience, but she is hardly a rookie to the entertainment world, having worked in the small-screen comedy world for almost a decade, starting with a stint on the fifth season of NBC’s Last Comic Standing. Although she didn’t win the reality show (that would be Jon Reep – yes, the Jon Reep), it led to a series of projects with Jon Glaser, Mike Birbiglia and other members of the influential alt-comedy crowd. 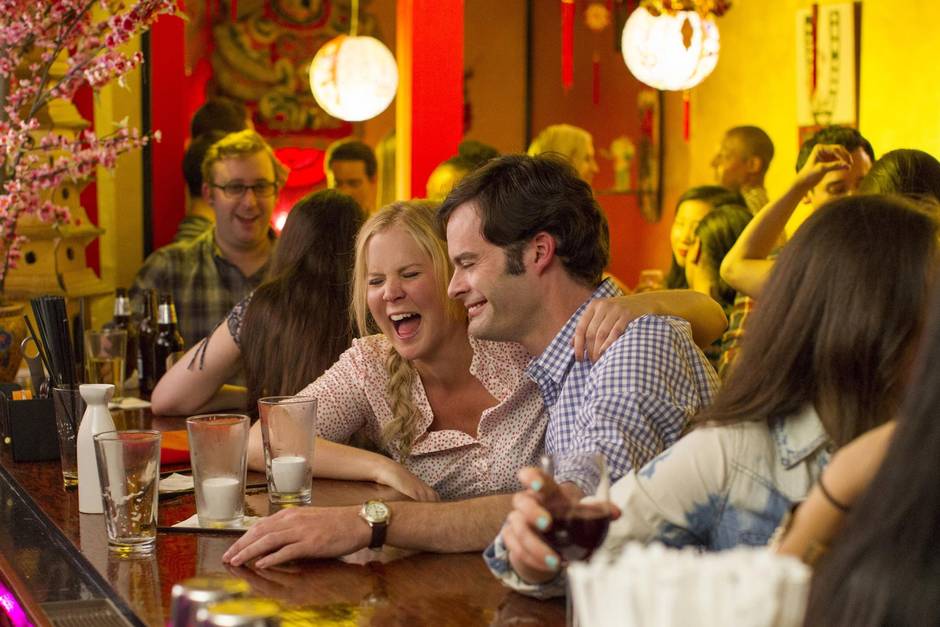 This photo provided by Universal Pictures shows, Amy Schumer , left, as Amy, and Bill Hader as Aaron, on a date in"Trainwreck," the new comedy from director/producer Judd Apatow. The movie releases in the U.S. on July 17, 2015. (Mary Cybulski/Universal Pictures via AP)

In 2012, she landed a Comedy Central special whose title, Mostly Sex Stuff, would go on to define her career, for better or worse. “My opener, Mark Normand, talks about sex for about 80 per cent of his act, and I talk about sex for 40 to 50 per cent,” says Schumer. “Yet nobody would ever say Mark has a lot of sexual content, where I’m the ‘sex comic.’” However backwards the label’s legacy, it shone a spotlight on Schumer’s layered, occasionally provocative act. It was then a short leap to her own show – which caught fire thanks to a series of wickedly funny, zeitgeist-catching skits – and, crucially, the attention of comedy kingmaker Judd Apatow.

“I ask people I’m interested in working with if they have any ideas they’re dying to do, and some come back in three months or even never. Amy came back with a script in five days,” says Apatow, who directed Trainwreck, the first movie that he didn’t also write. “She put in a massive amount of work, which is scary, because when you have to write something, you have to confront the possibility that you’re not as good as you hope you are. You sit in front of a blank page, and think, ‘I’m about to find out if I have no value as a human being.’”

That fear can be doubled when it’s a personal tale like Trainwreck. In the film, Schumer stars as Amy, a semi-fictional version of herself, though swapping the grimy world of stand-up for the slightly more glamorous environs of magazine writing. Sexually adventurous, borderline alcoholic and terrified of commitment thanks to her parents’ long-ago divorce, Amy is a character foreign to the fluffy modern rom-com: a fully complex, wounded female lead who embraces life’s uglier corners. 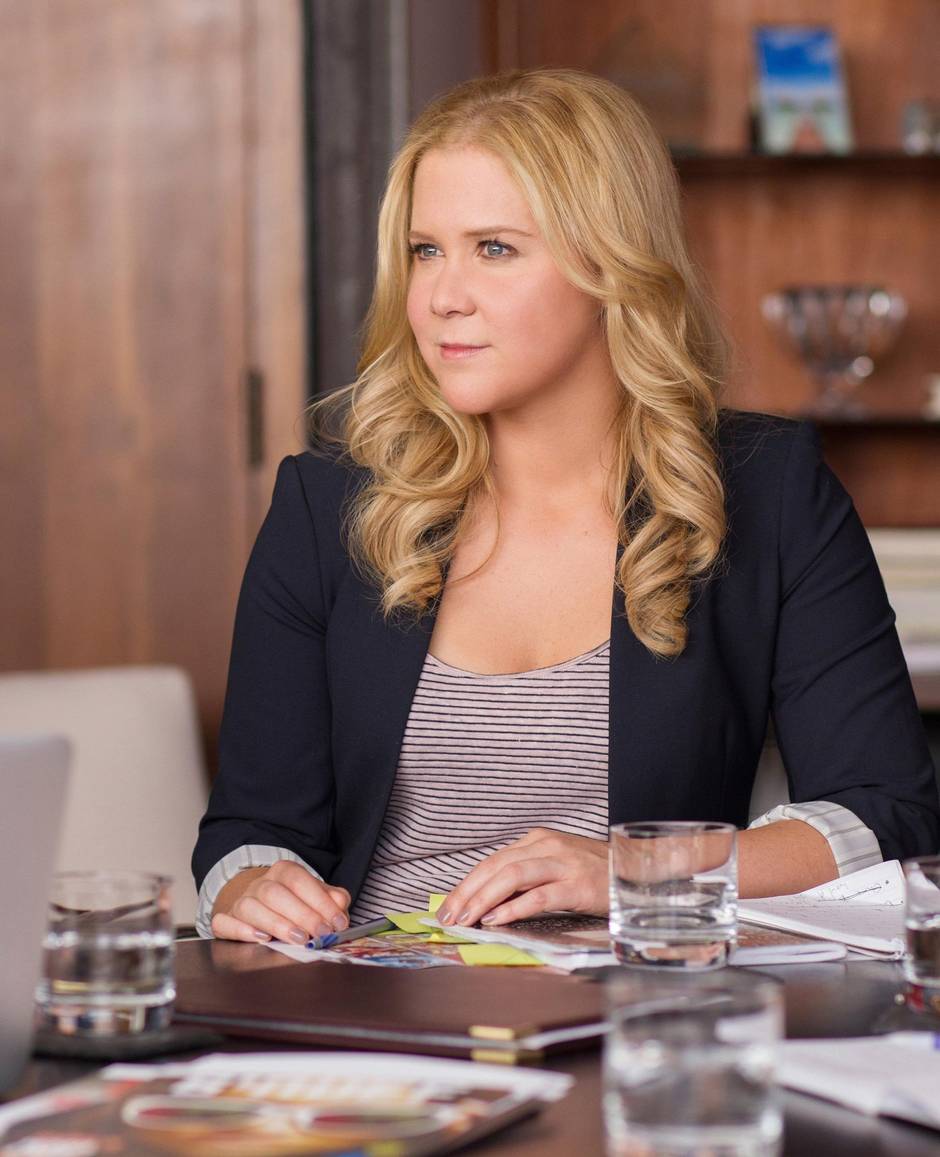 This photo provided by Universal Pictures shows, Amy Schumer as Amy, in"Trainwreck," the new comedy from director/producer Judd Apatow. The movie releases in the U.S. on July 17, 2015. (Mary Cybulski/Universal Pictures via AP)

“When I wrote this two years ago, I was going through the same things. I wouldn’t call it sleeping around – I was never having as much sex as Amy, unfortunately – but I was definitely spreading myself too thin, not committing in one direction so I wouldn’t get hurt, and drinking,” says Schumer. “But what I learned working on this with Judd was trust: to trust both myself and Judd to communicate that Amy’s story is important, that she’s not just a drunk tramp.”

The result is a stereotype-smashing triumph, a lacerating and hilarious look at a hero whose life is messy at best, but always compelling. No doubt there have been male variations on the same – many courtesy of Apatow himself – but Schumer delivers such an honest performance that Trainwreck isn’t merely a refreshment of the genre, but a wholesale reinvention.

“There’s a very low threshold for being forgiven of women for showing any kind of promiscuity, and that’s even a word that you’d only use for a woman, too,” Schumer says. “We’re still not used to women as sexual beings … I hope this causes a bit of a shift.” 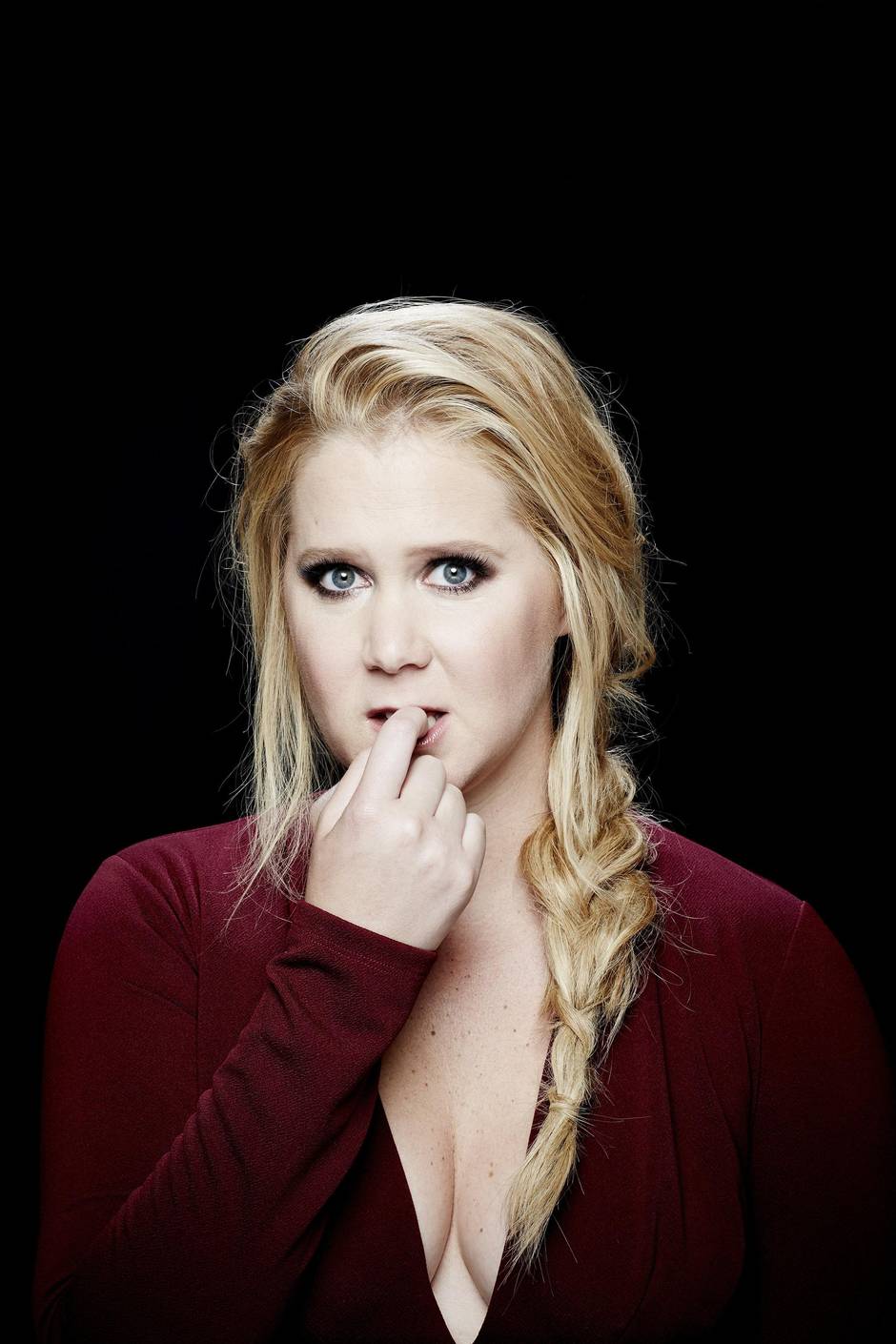 Undoubtedly, the cultural conversation is primed. But even if the film does succeed, there are still those lingering trade-offs to consider. “Everybody gets changed by fame – nobody is immune,” says Colin Quinn, a stand-up and Saturday Night Live veteran who plays Schumer’s father in Trainwreck. “It’s going to fuck you, it just depends on the degree.”

Adds Attell: “It’s cool that Amy is leading the charge here, but comedy clubs are really the last un-PC place for somebody to let it all hang out – when you have more on the agenda, when people are looking toward you more, you get baggage,” he says. “I think she could do it all eloquently and well, but it’d be cool for her to not have that baggage.”

History has a long line of comedians who’ve lost their edge after succumbing to the Hollywood cycle (hello, Eddie Murphy). But as Schumer has already proven, she doesn’t much care for how things have worked in the past.

“I remember we had a table read [of the Trainwreck script] when someone in the crowd asked, ‘Why would anyone like her?’ Then Jonah Hill popped up and said, ‘Because she’s awesome!’” recalls Schumer. “It was one of those moments when I was really wondering whether she was too unlikable or not for audiences, and it was a fine line. But you know what? She is awesome.” No argument here.