'Nobody calls me Anthony," says the septuagenarian acting legend, one of the greatest leading men alive, the star of Hitchcock. "Call me Tony."

Sir Anthony Hopkins was born in the same Welsh town as his idol, the late Richard Burton, and the men share marked tendencies: leonine talent, that Shakespearean timbre, and a history of alcoholism and temper. Hopkins, though, has been married since 1973 and sober since 1975. There will be no Lifetime biopics co-starring Lindsay Lohan about this sir.

Hopefully, there'll be no biopics at all, not for a long time. If Hopkins weren't around, who would play all the brilliant and/or terrible 20th-century men? He's been Hitler, Nixon and Picasso. Now he's a Hitchcock to end all Hitchcocks. Next year, he'll be Hemingway in in Andy Garcia's Hemingway and Fuentes.

Playing against hagiography is a hallmark of Hopkins's oeuvre. "I'm not a very nice man," he says over the phone from London, speaking not as himself – far as I can tell in 15 minutes, he is as nice as camomile tea – but as his character.

"Not that Hitchcock was a villain," he adds later, back to referring to him in the third person. "He was a great humanitarian and a huge romantic figure. But I gather that, towards the end of his life, he wasn't happy."

At 74, Hopkins is just a little older than Alfred Hitchcock was when – against all advice – he directed and self-financed Psycho (1960). Hitchcock, directed by Sacha Gervasi, tells the story of Psycho as nightmare-come-true, with Helen Mirren as Hitchcock's wife, Alma Melville, and a painfully outclassed Scarlett Johansson as Janet Leigh.

"[Hitchcock] was tired of making big movies with overpaid stars like Grace Kelly," Hopkins says. If he feels a little of the same fatigue, it doesn't show. On set, he was a prankster, creeping up behind castmates to boom, in Hitchcock's television voice, "Good eve-ning."

In our interview, he's fulsome about his co-stars, but matter-of-fact about his own much-discussed "process," which involves reading his lines exactly 250 times.

"It's a quirky, superstitious thing," he says. "I do it to know that I've got the lines, I've got the script in my head. Then I'm free. I can improvise, I can stand on my head, but as long as I've got the foundation of what's written – it's easy."

Of his scenes with the formidable Mirren, he says it's not about "chemistry" or any old chestnut. "It's just like playing ping-pong, or table tennis. You knock the ball to her, she knocks it back, you give and take, you don't try to cheat or steal the scene."

He's less sanguine on the subject of Hollywood. With Hitchcock's release rescheduled to make it eligible for the Academy Awards, the one-time winner (Silence of the Lambs) finds himself in a dead heat with Joaquin Phoenix (nomination-worthy in The Master) for Actor Who Least Wants Your Stupid Oscar. Hopkins, on awards campaigning, to the Huffington Post: "It's nauseating to watch" and "disgusting to behold." Phoenix, to Interview: "I think it's total, utter bullshit."

If either can get away with this, it's of course Sir Anthony Hopkins. (For the record: Putting on a fat suit to play a psychologically tormented genius with two different British accents in a film about filmmaking is the Oscarriest thing ever, even if said genius wasn't Alfred Hitchcock.)

Still, the performance never lapses into grandiosity. As Gervasi told me, "it's the tiny behavioural things, like the way he pulls his jacket over his prosthetic belly, that make Hopkins so supreme."

With salty Oscar speeches dancing in my head, I ask Hopkins what he most fears. Public speaking? Spiders? Or, like Hitchcock, the police?

He doesn't miss a beat. "The thought," he answers, "of being on Dancing With the Stars."

In other words, he's probably safe. 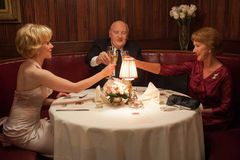 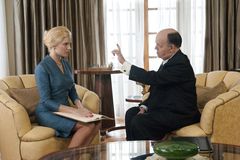 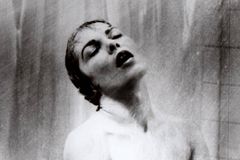