The director Albert Shin envisioned his new film Disappearance at Clifton Hill as a tribute to Niagara Falls, Ont., but the big-water tourist town wasn’t ready for its close-up at all. Sensing that the mysterious noir thriller would depict the city in a harsh light, the powers that be in the neon-lit destination, he says, imposed so many shooting restrictions that he ended up filming the movie under a fake title. “It was always a dance with them,” said the director, who has family ties to the region. “I wanted to make Niagara Falls interesting and intriguing. I thought I was doing something good for the city. They just didn’t see it that way.”

The film stars British actress Tuppence Middleton as a troubled, complicated young woman who returns to her hometown of Niagara Falls after her motel-owning mother dies. In a story with conflicting narratives and unpredictable turns, Middleton’s sleuthing character, Abby, is a mischievous handful at best and a pathological liar at worst.

Her sensible sister is played by Hannah Gross, the daughter of actors Martha Burns and Paul Gross, and best known for her role in the Netflix drama Mindhunter. The noted Canadian director David Cronenberg plays a town historian, conspiracy theory-spinning podcaster and scuba-diving scavenger hunter. How did Shin get the 76-year-old Cronenberg to slip into a wetsuit for the film? He simply asked him.

“We sent him the script and he responded almost within hours,” says Shin, speaking to The Globe and Mail in the Toronto office of the film’s distributor. “I was in his kitchen one day and a few days later we were throwing him in the Niagara River.”

Disappearance at Clifton Hill is the third feature from Shin, whose In Her Place was among TIFF’s Canada’s Top Ten of 2014. His latest film was inspired by Shin’s hazy memory of a kidnapping incident he thinks he saw in the Niagara area as a very young child. It happened so long ago, he’s not even sure it really took place.

Because of his history with the region, it was important that he shoot there. While the Niagara Parks Commission happily co-operated with Shin, other bodies were worried about the director’s off-season shooting and dark-side depiction of the town. “They got wind of what we were going to shoot,” Shin said, “and made things difficult for us.”

So, Shin shot on the sly. “The charade was all-encompassing," the director said. "There was no paper trail of anything that this movie was going to be called Disappearance at Clifton Hill.” (Clifton Hill is a street in Niagara Falls.)

Because he was bringing a relatively big production to the city, Shin expected to be welcomed with open arms, not the frozen mitt. “This was going to something worthy of a cinematic treatment, with the town as a character in the story,” Shin said. “But I suppose they were being brand-conscious.”

It is Shin’s belief that a controversial 2017 four-minute shortie shot by students at Toronto’s Ryerson University caused Niagara Falls officials to have their guard up. As Niagara Falls claimed to reveal “what truly lies within the city", showing the depressed economic flip-side to the putt-putt wonderland. The fallout was such that Ryerson president Mohamed Lachemi ended up apologizing to Niagara Falls Mayor Jim Diodati for the unflattering student film.

There’s a history to movies using the Falls as a backdrop. Most famously, 1953′s Niagara helped launch Marilyn Monroe’s career. The film’s poster exclaimed, “A raging torrent of emotion that even nature can’t control!” Was that a reference to the mighty Niagara River or the tempestuous bombshell actress?

Other films with the Falls as a backdrop include 1967′s Jack Lemmon-starring comedy Luv, 1980′s Superman II, the 1995 Michael Moore comedy Canadian Bacon and Cronenberg’s scary horror film The Dead Zone from 1983. More recently, Terrance Odette’s 2014 film Fall starred Michael Murphy as a Roman Catholic priest with a sexual-abuse incident in his past. Fall was warmly received by critics, but, given its subject matter and its grey-skied, snow-covered portrayal of the city, the film didn’t likely have the local tourist board jumping for joy.

Since the world premiere of Disappearance at Clifton Hill at last year’s Toronto International Film Festival, Shin hasn’t heard a peep from Niagara Falls officials. However, residents of the area, he says, have expressed fondness for the movie’s local spots and scenery (including the Flying Saucer, a UFO-themed diner). “Yes, the film is not a postcard of Niagara Falls,” Shin said. “but, in a way, it is my love letter to the city.” 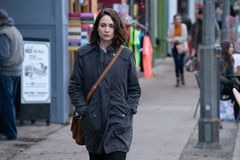 2020 movie preview: The 10 most intriguing, under-the-radar films to watch out for
Subscriber content
December 28, 2019 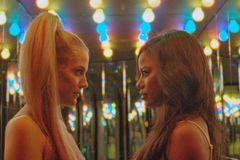