I’m not proud of this. Back in 2016, when I learned that Fox news anchor Gretchen Carlson had filed a sexual harassment suit against her boss, Roger Ailes (who died in 2017), I hoped she’d win – but I felt no compassion for her as a person. Ditto Carlson’s colleague Megyn Kelly, who announced later that year that Ailes had harassed her, too.

Back then – this was before the #MeToo movement, but that’s no excuse – my thinking went like this: Not all women are sisters and it infantilizes us to assume we are. Carlson and Kelly had risen to the top of an organization that was destroying, and continues to destroy, news. Whether they did so against their will or not, they regularly lied to the U.S. public and to the world; they spouted or supported racist, sexist and homophobic rhetoric; they whipped up fear and anger; they sanctioned misinformation and ignorance. Attacked by then-U.S. presidential candidate Donald Trump, Kelly suddenly began seeking support from feminists, which I judged as self-serving, too little too late.

I apologize to them both.

I’m not saying that the new film Bombshell – starring Charlize Theron as Kelly; Nicole Kidman as Carlson; and Margot Robbie as Kayla, a composite of the many women who were harassed at Fox by Ailes, Bill O’Reilly and God knows who else – changed my mind. (It opens Dec. 20.) Nor did the HBO miniseries The Loudest Voice in the Room, which covers some of the same ground. My thinking has been evolving for a while now. But there is a scene in Bombshell that distills harassment to its essence so clearly, it should be taught in corporate seminars and turned into a PSA.

In the scene, Kayla, who wants to rise from background producer to on-air personality, goes to Ailes’s (John Lithgow) office. It’s a fortress of secret back elevators and locked wooden doors, guarded by an assistant (Holland Taylor), who has hardened over the years into a solid Blind Eye. The interview percolates along nicely until Ailes asks Kayla to stand up and twirl for him. She does, winningly. Then he asks her to lift up her dress and show him her thighs.

She freezes. “It’s a visual medium,” he huffs. She does what a lot of women would do – she tries to joke her way out of it. She lifts her hem an inch and strikes a pageant pose. But Ailes isn’t joking. “Don’t waste my time, do you want to be on air or not?” he barks. “Higher.”

Her eyes fill with panic, confusion, bewilderment. He, however, is not looking at her eyes. “Higher,” he says, and this time his voice is thick with unmistakably sexual excitement. He’s not touching her, but he is certainly violating her.

When she finally lifts her skirt high enough to reveal a triangle of her panties, he lets out a grunt/groan. He pants raggedly for a breath or two, then asks her to sit back down. Oh yes, and he tells her that if she mentions this to anyone, she will suffer the consequences.

I watched this film in a theatre full of young women’s groups, and during this scene the temperature in the room changed perceptibly. I could feel 400 people holding their breath.

Bombshell’s script includes a pointed line about how most people don’t believe in sexual harassment until it happens to them or someone they know, and that’s a valuable thing to remember. But my culpability is different. I’ve always known harassment is a fact – it just didn’t bother me that Kelly and Carlson had experienced it. They weren’t “my” kind of women. And while I’m at it, I was lousy about Monica Lewinsky and the other Clinton accusers, too.

I don’t feel that way any more. And I’m not making excuses here. But during the past two years, the ubiquity and the universality of the #MeToo movement – along with the blithe disregard for it by the supporters of Trump, U.S. Supreme Court Justice Brett Kavanaugh, et many al – has made me realize that, although I’d considered myself a lifelong feminist, I’ve also swallowed and internalized the status quo.

And guess who that benefits? People in power. People – of all genders – who want women to believe things such as, “50 per cent of the population is just too unwieldly a number to be a special-interest group,” and, “Your feminism isn’t the right kind,” and, “White women of privilege don’t understand anyone else,” and, “Women can’t make change because they fall apart into sectarian squabbles.” The patriarchy wants us to believe we can’t change things because it doesn’t want things to change.

When the hearings to confirm Kavanaugh were taking place, and people were tweeting their #RapedNotReported stories, my 26-year-old daughter was startled to see how many women in my generation just put up with crap, and that was a revelation to me, too. I realized how much women have been encouraged to divide ourselves into groups, and that includes harassees.

The women who dealt with it by making jokes were encouraged to look down on the women who cried in the bathroom. The “ball-busters” who “don’t have a sense of humour” turned up their noses at the women who said nothing. Keeping us apart, keeping us in opposition to and in judgment of one another – as in, I can’t possibly support a fundamentalist/anti-abortion/willfully ignorant/Stepford wife/homophobic/racist woman – isn’t working for us. It’s working for them.

So yes, 50 per cent of the world’s population is a large number to wrangle. But you know what number would be easier? One hundred per cent. If all of us – all genders, all races, the marginalized and the mistresses of the universe alike – agree that no one should be sexually harassed, then no one will be.

The story of Bombshell isn’t a new story; it’s the same story we see time and again. (In fact, we’re seeing it again at Fox right this minute: Fox Nation host Britt McHenry is suing the network for failing to respond appropriately to her accusation that her co-host George Murdoch, aka Tyrus, sexually harassed her.) That’s why we should listen to it: One voice alone isn’t heard. Many voices together can’t be denied.

So again, to Kelly, Carlson, Lewinsky and the rest: No matter how strongly I disagree with many of your beliefs, I stand with you against sexual harassment. I’m sorry it took me so long to get here. 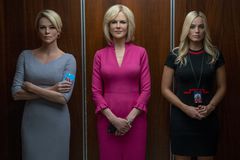