The Ontario government is out of the business of classifying movies, and the Canadian film industry is breathing a sigh of relief.

In last week’s provincial budget, Premier Doug Ford’s government introduced the proposed Film Content Information Act, which if passed will replace the Film Classification Act. The new legislation does away with the need for movies to be classified under age-appropriate labels (General, Parental Guidance, 14 Accompaniment, 18 Accompaniment and Restricted).

Instead, the burden of informing audiences about such content as violence, nudity, coarse language and substance use now falls to the industry.

The Film Content Information Act will not, however, change the guidelines for rating adult sex films or video games, which must still be reviewed “by an entity that is authorized to approve” such material in Canada. (Ontario currently sources its adult sex film ratings from Consumer Protection BC.)

As well, film festivals, limited-exhibition films and Canadian-produced films are exempt from having to obtain a classification rating, but will be “required to provide consumers with information on the film’s content,” according to the Ministry of Government and Consumer Services.

The province is making the move a little more than a year after Queen’s Park shut down the Ontario Film Authority, or OFA, a self-funded arm’s-length agency created by the previous Liberal government in 2015 in a restructuring of the Ontario Film Review Board.

The agency supported itself by relying on film-licensing fees, in which businesses distributing or exhibiting a film in Ontario were required to pay for one of seven classes of licences, and film-classification fees, which were required to distribute and exhibit a film in the province. Costs for the latter service ranged from $4.20 a minute for non-Canadian, English-language films to a flat fee of $80 for foreign-language films.

At the time, Ontario said the OFA was an “unnecessary” financial burden on the film industry, estimating that a modernization of the system would save at least $1.5-million a year in classification and licensing costs.

Lisa Thompson, Minister of Government and Consumer Services, also noted that “the major shift to digital platforms and streaming services has significantly changed viewers' behaviour and impacted the OFA’s business and revenues, making it unsustainable.” (The OFA earned $1.29-million in revenue in 2018, down from $1.9-million the year before.)

Canada is one of the few major countries in the world lacking a national film classification system. Instead, there are different systems in place for different jurisdictions, with film distributors having to pay classification fees to each. This is slowly changing, though, with British Columbia providing film-classification services for Manitoba since 2018, and Saskatchewan since 2007.

“As foreign-owned services continue their unregulated push into Canada, I’m pleased to see the move away from the scattered provincial approach toward national content regulation. Now we wait on what happens next,” said Mark Slone, president of distributor Pacific Northwest Pictures and past president of the Canadian Association of Film Distributors and Exporters. “We hope that deregulation in Ontario will lead to the adoption of a national content advisory system and a modernization of distribution licensing that serves consumers and ensures Canadian culture remains discoverable.”

“The new law reflects the reality that moviegoers are more than capable of making their own choices and now enjoy easy, instant, and ubiquitous access to the information they need to make those choices at the box office,” said Sarah Van Lange, Cineplex’s executive director of communications.

“We hope other jurisdictions follow Ontario’s lead and roll back their respective bureaucracies that unfairly burden theatres with fees and red tape that don’t apply to other sources of film content.”

As to whether there is any issue with the onus that the Film Content Information Act places on exhibitors to field consumer complaints about movie content, Van Lange said theatre owners “have always been the primary point of contact for guests, including their concerns about content, so in that respect the new legislation is nothing new.” She added that content information and ratings assigned by other Canadian jurisdictions will continue to be listed online and at the box office.

Still, there is concern that the new act could be viewed as a half-measure.

“The explanation that they’re keeping up with the digital times is shown to be just rhetoric when you consider they’re still insisting on review for adult sex films and video games, even if done elsewhere by another group or province. If they were really recognizing the streaming norm, they’d also discontinue the requirement of review for those, too,” said Paul Moore, an associate professor at Ryerson University in Toronto, who specializes in the history of cinema going in Ontario.

“Deliberate or not, they seem primarily to be cutting costs and red tape in Ontario by piggybacking on somebody else doing the work somewhere else.” 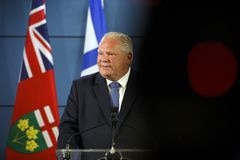