Quentin Tarantino, who early in his career named his production company A Band Apart in homage to Jean-Luc Godard’s film Bande à part, all but abandoned the French auteur in his so-called “late period,” suggesting with characteristic délicatesse that Godard’s head had disappeared up his own posterior. Tarantino was in profuse and very good company in this act of desertion. Susan Sontag, once an ardent Godardian, also rejected the late, increasingly hermetic films of JLG. But there are those of us who claim that Godard’s late films, from Sauve qui peut (la vie) (1980) onwards, equal and even surpass his great New Wave decade from Breathless to Weekend. Beautiful and inexhaustible, they demand and reward multiple viewings. (I have seen some a dozen times.)

Impossibly dense, gorgeous, exhilarating, and recondite as hell, Godard’s latest and perhaps last film, The Image Book, was made “in Switzerland and the world in sites of cinema and performance,” according to the jokester himself in the Cannes festival press kit. His film essay consists entirely of pre-existing footage and returns Godard to his role as solitary artisan, crafting with his computer a condensation of imagery from his own films, from his trove of classic cinema – the delirious “Tell me lies” liebestod from Nicholas Ray’s Johnny Guitar is deployed to moving effect – and from documentary footage culled from the internet, mostly of various wars (Vietnam, Bosnia, Syria, the Second World War).

Godard distorts his borrowed images, deforming their format and size at will and colorizing them with an acid palette of ultra-Fauvist hues – bilious greens, shrieking yellows, retina-ripping reds. (Murnau’s silent The Last Laugh gets adorned with both a soundtrack and a robin’s-egg tint.)

As with most of his recent films, Godard’s “book” is organized into chapters, one of which is named La Région Centrale in a nod to Michael Snow. The first chapter is labelled “Remake,” and Book is indeed in some ways a retread, recycling as it does imagery any hardcore Godardian will recognize from his previous work, especially his magnum opus Histoire(s) du cinéma.

A grand summation of his career, featuring dozens of aural and visual clips from his early New Wave work (Vivre sa vie) through the more esoteric reaches of his late period (a surprising number of excerpts from his unjustly traduced Forever Mozart), The Image Book also becomes a surging requiem for a world addicted to annihilation – of the Other, the self, the planet. “War is here,” Godard pronounces and proceeds to illustrate the historical continuities between every previous conflict and the current ones in Africa and the Middle East. (Footage of Islamic State atrocities threads like an insidious thrum throughout the film.)

Godard inserts a discussion of melody and counterpoint late in The Image Book, and it may court cliché to say, but the film aspires to the quality of visual music. Ever the instinctive montagist, Godard assembles clips and images as themes and variations – for instance, rhyming clips from Robert Aldrich’s nuclear-paranoia film noir Kiss Me Deadly with images of atomic-bomb apocalypse.

The film’s first image features an alabaster hand, its forefinger pointing straight up (perhaps to the God whose name is cached in the director’s, given the transcendentalism of Godard’s late period). “Man’s true condition is to think with the hands,” we’re told, a reference to Denis de Rougemont that introduces a lovely montage of said appendages – a favourite motif of Godard’s revered master Robert Bresson – that includes one of Godard’s patented homages to another Swiss artist, a close-up of the attenuated fingers on a Giacometti sculpture.

Similar suites follow, dedicated to trains (forever associated by Godard with war and the Holocaust) and water. In the latter, the director juxtaposes the shooting of partisans at the end of Rossellini’s Paisa, their corpses being thrown into the Po River, with Islamic State jihadists shooting men and tossing their bodies into a waterway. IS’s abuse of youths is later associated with the Italian fascists’ molestations of innocent youngsters in Pasolini’s notorious final film, Salo.

“Nothing is as handy as a text,” Godard declares in the film – his gruff, cigar-cured voice throughout has an old man’s quaver until it disintegrates in a coughing fit in the coda – though his long-held distrust of words remains. His Book proliferates with typically gnomic pronouncements, but its beauty lies primarily in the images – paintings by Manet, Munch, Gauguin, Gentileschi, Destrée, Masaccio, Caillebotte and that ceaseless sluice of cinematic clips.

The final excerpt is most telling. Godard’s films have been sending out suicide notes and funeral notices for more than a decade, so the last image of this Book – the dance of death in Max Ophuls’s Le Plaisir, in which an old man wearing the mask of a beau jeune madly cancans to mortal expiration – denotes a more determined adieu.

Film Review
Review: Godard Mon Amour says goodbye to the language of an auteur
May 10, 2018
Cannes Film Festival: What to expect on the Croisette
May 6, 2018 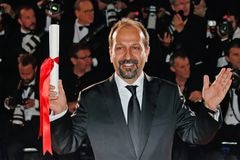