There’s a great bit in The Whistlers where a bunch of hapless crooks infiltrate a mattress factory and have to tear hundreds of them apart to find just the one that’s been stuffed with money. It’s the kind of delightful absurdist take you’d expect from Romanian filmmaker Corneliu Porumboiu, and even he still finds himself chuckling at the visual gag when we sit down at TIFF to talk about his latest movie, making its Canadian debut.

That sort of wry wit is to be expected from this director, who was part of the recent Romanian nouvelle vague. But unlike his previous movies, The Whistlers has a lightfooted visual style, as it shifts between Bucharest and the Canary Islands, that’s more accessible and coolly atmospheric thanks to expansive cinematography by Tudor Mircea. And it’s heavy on the drollery (and it’s co-produced by Toni Erdmann filmmaker Maren Ade).

Review: The clever but vague Romanian drama The Whistlers hums its own peculiar tune

The new movie also has its roots in his well-reviewed 2009 Police, Adjective. In fact, Porumboiu calls The Whistlers a sort of spiritual sequel to that film. That movie deconstructed the crime procedural with mundane realism – the stultifying meetings, minutiae of paperwork and literal by-the-book drudgery of an idealistic cop. Porumboiu found himself wondering about that uncompromising cop and where his career had progressed, how his conscience had held up, and was keen to revisit him down the road, after the sting operation that concludes Police, Adjective. “All the time he was staying with me this character because it was creepy, in a way,’ he explains, “and at the same time it can’t last, this type of philosophy!”

Thus, when we meet Cristi (Vlad Ivanov) again years later in The Whistlers, he is very much a fallen idealist. And, possibly, corrupt. To the strains of Iggy Pop’s The Passenger he is arriving on La Gomera, an island in the Canary Islands, to learn a centuries-old whistled language called ‘el silbo gomero’ that has been used to communicate messages across great distances. It’s part of the movie’s not-entirely fanciful premise that gangsters from the Canary Islands are operating in Romania, and the virtually undetectable language is a necessary part of their elaborate scheme to get a comrade out of prison.

The principal actors spent weeks becoming proficient enough in the UNESCO heritage-designated language, Porumboiu says, to be believable even in close-ups. He also wanted to explore the contrast of ancient methods to communicate with their modern counterparts. “It’s very strange, because for example there are a lot of kindergartens where the parents have cameras into the schools and they access it,” Prumboiu says of the contemporary culture. “It’s quite frightening.”

The Whistlers also has something to say on these contemporary modes of data collection and surveillance, about the limits of the mediated image, interpretation and the dangers of trusting what we see on monitors. The tweaks are surprisingly playful, coming from a filmmaker in post-Communist Romania, where the history of state intimidation and surveillance casts a long cultural shadow. These are mixed in with a few self-referential tweaks (like an ill-fated director and a shootout on an empty studio backlot; he jokes that the doomed filmmaker of the story is probably him.)

With its inscrutable anti-hero, serpentine plot of flashbacks and labyrinthine double-crosses, The Whistlers invites obvious comparisons to the convoluted machinations of The Big Sleep, especially because of how the would-be heist plays out with neo-noir elements. The least subtle detail among them is that a sensual femme fatale is named Gilda (Catrinel Marlon), after the iconic (and arguably ultimate archetype) played by Rita Hayworth.

The director explains that he wanted the genre to be more explicit than it was in his 2015 deadpan caper, The Treasure, “a very oblique western – very oblique,” he admits with a laugh, of that foray, which comes off perhaps more as Groundhog Day than The Treasure of the Sierra Madre. “I was a little bit frustrated after The Treasure,” he continues, because in hindsight it was “not so clear – not far enough. I want to do it more frontal.”

The visual stylization is more subtle. In a concept suggested by the movie’s artistic director, Arantxa Etcheverria, a former production designer of theatre and opera, each of the movie’s episodes is defined by inter-titles in a colour that plays back to a character or set moment (e.g. Gilda’s red dress and car) throughout the chapters. The unifying aesthetic makes for an artfully arranged plot even if following it remains a complex calculus. “It’s my passion!” he enthuses, of thinking through the movie’s ever-shifting love triangles and circular plots with math. “When I was a kid I spent a lot of time making geometry. Solving problems.”

Thanks to its high-concept conceit and title – and the overall film noir nod, this is about the right time to inserts a quippy remark about Lauren Bacall putting her lips together to whistle. Porumboiu’s heard it from a gaggle of critics already – this is the first movie he’s taken into competition at Cannes, and it went on to become Romania’s official submission in the international film Academy Awards category. But as with his own jokes, even now the reference still elicits a polite laugh.

The Whistlers opens March 13 in Toronto and Vancouver, March 20 in Montreal 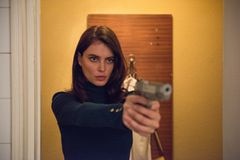 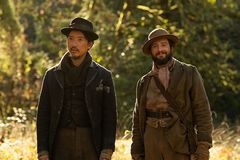