For an actor, it is an impossible conversation: How do you talk about your new movie during a week when a new movie seems like the last thing that people want to talk about? But when that movie comes courtesy of director Spike Lee and is just as focused on the racism of North American society as today’s protests are, then the conversation doesn’t have to feel so irrelevant.

So it goes for Delroy Lindo, the prolific character actor and frequent Lee collaborator (Malcolm X, Crooklyn, Clockers), who at 67 is getting one of the meatiest roles of his career with Da 5 Bloods. The Vietnam-set film, part heist thriller and part morality tale, stars Lindo as one of four war vets who return to Ho Chi Minh City to recover the body of a fallen comrade, as well as a stash of buried gold.

Ahead of the film’s release on Netflix this Friday, and just days after protests against anti-Black racism and police tactics rocked cities across America and Canada, Lindo spoke with The Globe and Mail about the film’s accidental timeliness, getting into the mind of a Trump supporter and his long relationship with Lee.

Spike Lee’s work is always relevant when it comes to Black issues, political issues, societal issues, but arriving this week, it resonates in ways I don’t think he, or anyone, could have predicted. What is it like for you promoting this movie this week, of all weeks?

It has enhanced everything – it’s acutely enhanced the relevance of the film and has intensified for me personally the whole prospect of speaking about it, or quote-unquote promoting the film. As a creative worker, a Black person and a human being on the planet. The whole decibel level has increased five- or ten-fold. In terms of my pride in the film, I’m deeply proud of it. But the feeling around the film given everything that has happened over the past few weeks has intensified.

What was your reaction when you found out that your character Paul would be a Trump supporter complete with a “Make America Great Again” hat?

[Laughs] I asked Spike if the character could just be an arch conservative, and Spike thought about it and texted me back four days later and said no, he really needed Paul to be a Trump-ite. We had a conversation in which I said, “Man, please don’t make me do this.” But I went back and read it a second and third time, and then it was confirmed for me that Paul was the part that I needed to play. From a creative standpoint, Paul was the part. It’s such a brilliant Shakespearean role – an epic, large tragic figure.

You have this haunting four-minute monologue toward the end of the movie, where we get a deep look into Paul’s tortured soul, where it feels like Spike is exorcising a generation’s worth of demons for Black Vietnam vets.

Many of the journalists who I’ve spoken with are singling out that monologue. I was in a fortunate position, because by the time we worked on it we’d been filming in Thailand for six weeks, and I felt plugged in to Paul. Now, I wasn’t going around saying I felt connected, “I’m at one!” But in retrospect, talking about that scene with journalists now, what I’ve come to realize is that by the morning we worked on it, there was, I don’t know, a moment of simpatico. First, the technical aspect; the words were firmly implanted into my being. That’s a good sign. And Spike, he pretty much left me alone. Had I not been on the right track, we would have discussed it. And it worked out, because now so many people are mentioning that scene.

Are you surprised that we’re all talking about that? Is there another moment that stands out for you?

No, no, no. One just doesn’t think about that. You do the work. Broadly speaking, I had a feeling that this was good work, all the way around. It felt particular and it felt special. I hesitate to even use that term, “special,” but it felt the same way when I was working on Malcolm X; it just felt right.

On that notion of something feeling right, Da 5 Bloods is an interesting mix of genre and form – it’s a movie that’s highly aware that it’s a movie. I’m thinking of those flashback scenes where there’s no attempt to make you look decades younger, whereas Chadwick Boseman’s character Norm, who died in combat, appears as his age-appropriate self.

When I read it, that aspect was not jarring. It was written in the script that we would be the same age. It made sense, and when we filmed it, it was seamless. It’s a fascinating thing to deconstruct why that worked and didn’t feel weird. It’s partially because that we had spent five weeks together as actors, and then Chadwick shows up as the fifth member of our squad. Before that, we had been working a good amount of time reminiscing about Norm, talking about Norm, so when Norm showed up in the flesh, so to speak, it’s a seamless thing that we would be reliving it in the present time. Of our recollection of him back in 1971. It makes total sense.

Your work on CBS’s legal series The Good Fight highlights another project that is resonating even deeper this current season. How difficult was it to make the decision to leave after this season for the upcoming ABC series Harlem’s Kitchen?

Da 5 Bloods is available to stream on Netflix starting June 12. 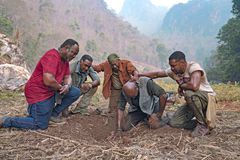 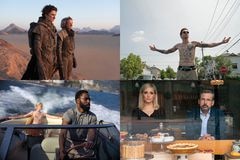