First, Dexter Fletcher took over for fired director Bryan Singer on Bohemian Rhapsody and brought that Oscar-hoarding Freddie Mercury biopic over the goal line. Now, he’s basking in the glow of the critics’ gleeful considerations of Rocketman, the romping, sentimental and occasionally bananas musical based on the life of Elton John. What’s next for Fletcher, then? The audience demands an encore – does he have something in mind?

“I wanna do Star Wars,” says a laughing Fletcher, on the phone from New York and aiming high, “with the 11-year-old me.” Funny he should mention that galactic blockbuster franchise — Star Wars was the first thing that came to my mind as the opening credits to Rocketman grandly rolled, set to the John-and-Taupin hit Goodbye Yellow Brick Road.

“You know, I’m in an interesting moment in my career,” Fletcher says, more seriously. “I’m a relatively new director. I finished this film and four days later I was in Cannes watching it with Elton John and Bernie Taupin. It’s been a bit of a whirlwind and a bit of a roller coaster so far.”

Fletcher, a 53-year-old Londoner, may be a newcomer to the directing game, but he’s been around as an actor. At the age of 13, he played the part of Baby Face in the Scott Baio vehicle – when’s the last time you heard those three words together? – Bugsy Malone. More recently, those with HBO subscriptions might have noticed him and his convincing American accent in the Second World War miniseries Band of Brothers.

On the feature-film side, Fletcher is something of a protégé of Matthew Vaughn, the Rocketman producer. The then-actor appeared in Vaughn’s projects Layer Cake and Kick-Ass, as well as the Vaughn-produced Lock, Stock and Two Smoking Barrels, and it was Vaughn who suggested to 20th Century Fox that Fletcher finish Bohemian Rhapsody after Singer was let go from the film halfway through its making.

Rocketman lead Taron Egerton is another favourite of Vaughn. Both Tom Hardy and Justin Timberlake were strongly considered to portray John before Egerton, star of the Vaughn-helmed spy-action Kingsman comedies, got the role.

Fletcher describes his experience on Bohemian Rhapsody as a “boot camp” on how to make a seventies-set rock biopic, and says he doesn’t have the “emotional attachment” to it in the way he does with Rocketman. After wrapping up a tame version of one homosexual British rock star’s story, Fletcher was chomping at the bit to get at the grittier aspects of John’s saga.

“The studio knew from the outset that these things were going to be addressed,” says Fletcher, referring to John’s sex, drugs and chilled-vodka lifestyle. “That’s what got me interested in the film in the first place. Elton wanted it to be an R-rated musical. There’s not a lot of them around.”

There’s at least one around: All That Jazz, Bob Fosse’s Dexedrine-drenched semi-autobiographical fantasy from 1979. The film was an inspiration for Fletcher’s vision for Rocketman, as was Richard Attenborough’s A Chorus Line.

When I mention the more obscure 1974 musical drama Stardust, Fletcher is surprised at the reference. “I know Stardust. I watched it not that long ago,” he says. "It was part of my research.”

Like Stardust, the more melodious Rocketman concerns the rise and fall of a British rocker. Unlike Stardust, the Elton John story, while billed as a “musical fantasy,” is not fiction. So, for its portrayal of John’s father Stanley as cold and emotionally unavailable, the whimsical Rocketman has received pushback from family members who remember him more favourably.

“I can only speak to what Elton related to me or to scriptwriter Lee Hall,” Fletcher says. “I don’t see anyone as a villain.”

John, who worked closely with Rocketman’s creative team, apparently does. In a 1976 Playboy interview, the flamboyant rock star described his “absentee father” as a control freak whose domineering parental manner led John to rebel though a flashy persona.

“The film is Elton’s memory,” Fletcher explains. “That’s what allows it to be imaginative and fantastical, because memory is an imperfect source of material. Especially if you were drunk at the time.”

John is now long sober. His recollections offer excellent moments of seventies-rock highs and lows. Apparently Mama Cass threw stellar parties, and John threw outrageous fits. Fletcher’s favourite Rocketman scene is set at the famed Los Angeles music club the Troubadour, in which John and his audience are not only hopping and bopping to Crocodile Rock, but levitating, too.

“The way Elton described it, there was a moment that felt like time stopped and everybody lifted off the ground,” Fletcher says. “That’s a story that gives you a sense of what the moment felt like. It connects you emotionally to an experience.”

On the song Goodbye Yellow Brick Road, John wonders about what comes next after a high: “When are you gonna come down? When are you going to land?”

Fletcher, who directed the 2013 Scottish musical film Sunshine on Leith, and who has openly mused about making a Madonna movie, resists specifics when asked about being typecast as a jukebox-biopic specialist.

“I’ll let the dust settle and read some scripts,” he says, when pressed about his next project. “Maybe I will do another musical, if that’s where it’s at. It could be anything, though." 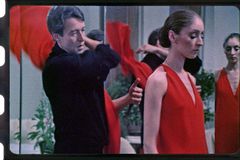 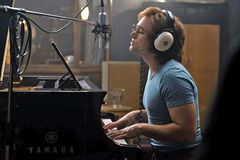