“For pretty much any experience or question you have about living in modern society, Virginia Woolf has written an essay,” filmmaker Chanya Button declares.

Take, for instance, the popularity of moving pictures. “The eye licks it all up instantaneously,” Woolf said in her 1926 essay, The Cinema, of her experience of the new artistic medium. It was written after watching The Cabinet of Dr. Caligari, but she could easily have been talking about the sensual and almost tactile pleasures of Vita & Virginia, the visually ambitious new movie that explores the early years of the relationship between the modernist writer (Elizabeth Debicki) and impetuous, vivacious socialite and novelist Vita Sackville-West (Gemma Arterton).

Review: What would Virginia Woolf say about the new biopic Vita & Virginia? Nothing complimentary, most likely

The movie compresses the timeline of their initial intimate encounter, “which at times was overwhelming and intoxicating in its intensity and defied definition,” director and co-writer Button said, as Woolf writes Mrs. Dalloway and To the Lighthouse while being the romantic quarry of Sackville-West, who would go on to inspire Woolf’s 1928 novel Orlando, about an ageless and gender-fluid aristocrat.

“I think that not only female relationships but there are interpersonal relationship that are more complicated than can be distilled into [categories such as] sexual, platonic, romantic, marital, sibling,” she said at the film’s world premiere at the Toronto International Film Festival in 2018. “I just think that life is so much more complicated than that. A relationship between two people is something that evolves and grows and it will go through seasons.

“I wanted to make a film that had a kind of pragmatic approach to friendship and romance and marriage,” Button said. Even by today’s standards, she added, Woolf and Sackville-West had found their voices. “They, as women, were enormously progressive in their work and life. ... There’s nothing adolescent about these women. They know exactly who they are.”

The starting point was Dame Eileen Atkins’s 1992 stage play, adapted from the women’s correspondence and later performed on Broadway. Accordingly, Button intercut stark and dramatic sequences of the women reading one another’s missives. “Because they are so dexterous with the English language and letters are meant to be read, meant to be an internal experience, I was very aware putting them on screen that I wanted to give an audience an experience of them, which is why we did them in this very confronting, very act-y way,” she said.

“I wanted to create an experience for the audience of what it must have felt like to receive that letter. What it must be like to be seduced by Vita Sackville-West. What it feels like to have Virginia Woolf and the full laser beam of her attention on you.”

Those scenes aren’t only the startling elements in Vita & Virginia. As with A Quiet Passion, the biopic of Emily Dickinson by Terence Davies, this movie is spiky, febrile and also, at times, mannered. And it makes ample use of dialogue that features what literary critics have called the acoustic quality of Woolf’s prose, and how it reverberates.

Inasmuch as it is possible to convey the sensations of passion, and Woolf’s mental and emotional landscape, through images, flowers sprout through floorboards, vines curl around concrete and birds swoop with menace. There’s also an insistent and pulsing electronic score – think early Portishead – composed by Isobel Waller-Bridge (yes, older sibling of Fleabag creator, Phoebe).

“The past is expressive here,” Debicki’s Woolf at one points tells her lover’s imperious mother, Lady Sackville (Isabella Rossellini), over dinner; “a crowd of people stand behind you, not dead at all.”

The visual work of the Bloomsbury Group influenced the film’s colour palette and, in a couple of subtle instances, the framing of scenes matches portraits of Woolf by her sister, painter Vanessa Bell. But those seeking literal recreations should look elsewhere. “Everything in the film is authentic but it’s a different order,” Button said about conjuring the idea of iconic Bloomsbury spaces such as Charleston, the country home of Bell and her husband, Duncan Grant, or Woolf’s Tavistock Square home. Likewise, Sackville-West’s ancestral estate Knole is an interpretation in the movie, not a recreation.

“In the way that Orlando was an expressionistic response to who Vita was as a person, it’s a biography and not a biography that manages to speak entirely about Vita but never about her life literally,” Button said, “there is quite a meta-quality to film where there’s a biographical slant that is about a woman who is trying to write a non-biography. So I knew I needed a bit of unconventional approach to that.”

Button spoke of the audience she was looking for with Vita & Virginia. “I’m young, it’s a young film. It’s something that’s attempting to speak to hopefully a younger audience who might not normally go and watch a period drama about a really iconic writer,” the 32-year-old filmmaker said. “Consciously and subconsciously I was pulling it into today and making it young and vibrant and energetic.

Film Review
What would Virginia Woolf say about the new biopic Vita & Virginia? Nothing complimentary, most likely Subscriber content
November 21, 2019 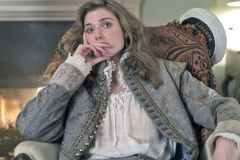