This movie sucks. Ever since March, the world has felt like one particularly bad disaster film – overlong, clichéd and implausible. We all want the end credits to roll; we all want to get back to reality. Which, for some, includes going to the theatre to watch a legitimately good disaster film. Something such as Tenet, the latest sci-fi head-trip from Christopher Nolan, which will be one of the first big Hollywood releases to welcome audiences back to the multiplex, should Warner Bros. maintain its recently rescheduled release date of July 31.

But trying to envision the next phase of movie-going in Canada makes my head hurt, even more than attempting to summarize Tenet’s plot (something about the time-travel-but-not concept of “inversion;” it’ll make as much sense as Nolan’s Inception, and we’ll still think it’s cool). Most of this unease centres on the state of Cineplex, Canada’s largest exhibitor, which is facing an existential crisis emblematic of the entire film industry. And it might be audiences who suffer the consequences.

To quickly recap the high-stakes drama: In December, Cineplex, which accounts for about 75 per cent of the domestic box office’s market share, agreed to a $2.2-billion takeover from U.K. giant Cineworld. The deal – which would have seen Cineworld take on the $625-million debt owed by Cineplex – was viewed as something of a lifeline for the Toronto-based company. As streaming has increased over the past few years, theatre attendance has declined.

Flash-forward to last week – and a whole new world, in which theatres are shuttered thanks to COVID-19 – and Cineworld has quashed the deal, alleging that Cineplex breached certain conditions of the agreement, including not operating its business “in the ordinary course.” Cineplex immediately fired back, noting that the deal accounted for “outbreaks of illness or other acts of God,” and alleging that Cineworld was using the pandemic as cover for “buyer’s remorse.”

Cineplex now plans to commence legal proceedings against its former suitor, all while it is engaged in a massively complicated reconfiguration of its business. This week, the company announced that it will open “as many of its locations as it can on July 3 (or soon thereafter as permitted by law),” complete with new “end-to-end” health and safety measures.

“The day our doors closed was the day our team began diligently preparing for their safe reopening. ... And that involves many, many, many measures and operational changes being put in place,” Sarah Van Lange, Cineplex’s executive director of communications, said in an email to The Globe and Mail, adding that the company will soon launch a microsite outlining the new initiatives. “We have used the last three months to re-examine all of our buildings and processes, so that when our theatres and entertainment venues reopen, we’ll be ready to keep them that way.”

Recent surveys suggest cooped-up audiences are ready. U.S. digital ticketing platform Atom Tickets released a poll in May that said 77 per cent of respondents would return to theatres within a few months, while research conducted by the Logit Group for Cineplex at the end of April found that 34 per cent of Canadian moviegoers expected to return to theatres within the first month of reopening (with that number going up to 80 per cent for returns sometime in 2020).

Personally, once theatres are given the green light, I’ll be there. For starters, I miss the movies desperately. But it also sounds as if Cineplex is putting appropriate health measures in place. Van Lange said auditoriums will have reserved seating to ensure physical distancing, employees will wear masks and PPE and, “following guidance from Canada’s Public Health Agency, we will recommend that our guests do the same.” According to experts, there is little reason to believe that movie theatres, especially physically distanced ones, are sources of outbreaks. Plus, supporting the film industry at this disastrous time – an industry that I depend on for my own livelihood – is no small thing.

But I imagine, and understand, that others will feel differently.

Even with the most robust cleaning protocols, the thought of being surrounded by strangers indoors for two hours must not exactly be comforting to some. Take away the usual joys of a night at the movies – concessions will still be available, although it is anyone’s guess whether audiences will indulge in the munching of popcorn and slurping of soda with the same gusto; reduced auditorium capacity means the thrill of a sold-out audience reaction will be muted – and an evening at home watching the new Judd Apatow comedy begins to look like a bargain, financially and psychologically.

Then there is the sheer unpredictability factor of the fall, when fears of a second wave may persuade Hollywood to scrap its release calendar all over again. Add an unprecedented legal fight to the mix and it becomes increasingly clear that Cineplex is facing challenges too immense to adequately articulate. It is little surprise that Tim Casey, a Bank of Montreal analyst, noted this week that Cineplex’s revenues could be cut in half this year.

And while some parties in Canada might cheer any hypothetical demise – just before the pandemic hit, the newly formed Network of Independent Canadian Exhibitors accused Cineplex of unfair booking tactics – as goes Cineplex, so goes Canadian movie-going.

Landmark Cinemas, the country’s second-largest movie chain with 46 theatres, said Tuesday that it will reopen six of its Alberta locations on June 26 and hopes to operate more on July 3. The same day, Cinémas Guzzo said its 10 Quebec locations would reopen July 3, too. But the 165-theatre-strong Cineplex dwarfs both.

The National Association of Theatre Owners, which counts Cineplex president and chief executive Ellis Jacob as its chairman, often likes to remind its members, and cynical film journalists, that cinemas have weathered myriad disruptions throughout their history: television, VHS, DVD, streaming. But just because you’ve survived four gunshots does not mean that the fifth bullet won’t kill you. That kind of miracle only happens in the movies. 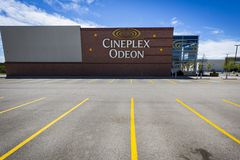