The horror-movie landscape is a scary place these days – at least, it is if you limit your definition of “horror” to masked slashers, creepy clowns and haunted dolls. Those kind of intellectual-property-driven films still exist and indeed drive the market – last year saw new versions of familiar killers Jigsaw, Chucky, Leatherface and Pennywise, while this summer closes with The Nun, a project that sets a record for franchise contortions, being a spin-off of a sequel (The Conjuring 2) that itself inspired a prequel (Annabelle).

But for those who prefer their horror with some sense of originality or innovation, these are delightfully frightening times. The Witch, The Invitation, Green Room, The Babadook, It Comes at Night and last year’s Oscar-winning phenomenon Get Out – no matter how disparate in subject matter and artistic execution, these films are part of an emerging subgenre of films dubbed everything from “elevated horror” to “post-horror” to “gorenaissance” (the latter being my own ill-fated bid to establish a go-to portmanteau).

However you want to cheekily classify them, the film industry is currently coming around to the oft-forgotten realization that horror movies come in all shapes and sizes, and can succeed by swapping buckets of blood for subtler thrills.

“It’s clear there’s a movement of emerging filmmakers now who are taking advantage of the framework of horror to tackle heavy themes and ideas, and do so in a commercial way,” says Peter Kuplowsky, programmer of Midnight Madness for the Toronto International Film Festival. “I don’t think it’s a new phenomenon – it just happens in waves. In the seventies, there was a boon thanks to The Exorcist. In the nineties, there was the tendency to call horror movies like Silence of the Lambs thrillers instead. And now it’s ‘elevated horror.’ ”

This month, writer-director Ari Aster’s Hereditary joins the conversation about what could and should be considered horror and what steps the genre might be taking in a bid for prestige.

Rosemary’s Baby as re-imagined by Charlie Kaufman after one too many viewings of The Shining, Hereditary is both familiar in its frights and startlingly original in its vision. The film opens on a tense and loveless funeral, as Annie (Toni Collette, never better than when playing mothers battling the supernatural) says goodbye to her distant and difficult mother, Ellen. The matriarch was always a mystery to her family, with the exception of granddaughter Charlie (Milly Shapiro), a young girl whose pastimes involve cutting off the heads of birds. Soon after Ellen is six feet under, Charlie is involved in an accident; Annie’s husband, Steve (Gabriel Byrne), starts questioning his wife’s sanity; and the couple’s eldest child, teenage stoner Peter (Alex Wolff), gets lost in grief and paranoia.

To reveal more would ruin Aster’s unsettling and carefully plotted feature debut, which relies on its audience both knowing and eager to rebuke a century’s worth of horror cinema. All you should know is that Aster’s family melodrama quickly becomes extreme – so much so that the film nearly destroyed critics (in a good way) when it premiered at the Sundance Film Festival this past January. “The most insane horror movie in years,” USA Today said, while website The AV Club labelled it “the most traumatically terrifying horror movie in ages.” Those lines reek of old-school marketing hyperbole, but Hereditary is mostly the real deal: an intense, punishing and wink-free exercise in pitch-black terror. It will shake you for days.

“It is deeply hopeless, yes,” Aster says during a recent interview in Toronto, with only the smallest hint of a laugh escaping his focused demeanour. “There’s a certain complacency that comes with watching a horror movie or a genre film – we know all the tropes, we have all the expectations. There’s something fun about playing with those. The idea behind a lot of this film is to establish familiar conventions and then upend them in ways that would shock the audience out of that complacency.”

Aster shouldn’t be positioned as an enemy of all the horror that has come before, though – he’s simply happiest when disturbed.

“I was obsessed with horror films growing up and I would exhaust every horror section in every video store when I was 12 or 13,” the 31-year-old says. “There were a few films that traumatized me, like Carrie, or Peter Greenaway’s The Cook, the Thief, His Wife & Her Lover, which isn’t necessarily a horror film but really disturbed me. I love what the genre can do. But there are films that can be made pretty cynically – where you feel a studio hand just ticking off the boxes of what an audience wants.”

Hollywood has long thrived on such familiarity and comfort. There are 12 Friday the 13th movies, eight Saw instalments and 11 Halloween go-rounds (including this fall’s David Gordon Green-directed reboot, which wipes out the continuity of every movie that came after John Carpenter’s original 1978 slasher). Even when something fresh comes along, studios quickly recognize the potential to exploit an original concept, with Paramount recently announcing that a sequel to John Krasinski’s come-from-nowhere hit A Quiet Place. Without spoiling too much, films such as Hereditary or Jordan Peele’s Get Out are engineered with all their creators’ might to explicitly deny sequel or franchise possibilities.

But there is also a danger, Aster says, in attempting to somehow prove that horror films are all of a sudden a genre deserving of respect and elevation, as if the case hasn’t already been made time and again.

“I kind of hate that term ‘elevated,’ because it’s sad to say, ‘No, no, no, we’re putting thought into this.’ I think there has always been exceptions, that great horror movies were always being produced,” says the filmmaker, who proceeds to rapidly name-check the work of Nicolas Roeg (Don’t Look Now), Jack Clayton (The Innocents), and Na Hong-jin (The Wailing). “I do enjoy being lumped into the conversation [now], though, because it means people are enjoying the film and credit it with being some return to form. There’s no downside to that.”

Well, Aster adds, that’s fine just as long as the conversation continues to be one focused on the big-screen experience.

A great deal of Hereditary’s effectiveness relies on the audience experiencing it in a closed-off environment. The images are meant to be immersive and intimidating and the sound design is engineered so that nothing else should be heard. Watching the film at home on, say, Netflix or another streaming service, would offer too easy a temptation to simply pause and walk away from the terror, to move on to something less challenging.

“Streaming services are exciting, but I am sad about the shift away from [theatrical releasing],” Aster says. “It’s something to lament, and it’s certainly harder and harder to make a small film like this and get it distributed. But this was designed to be seen on a big screen with surround sound. I know when I’m watching a film at home, it’s up to me. I watch in segments because it’s easy. I want it to be up to the movie, instead. I want to be trapped with it.”

As with the greatest works of horror, the terror comes from being alone in the dark. 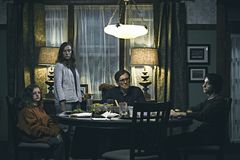