There are few contemporary directors who know the world of Broadway better than Joe Mantello. The winner of two Tony Awards for directing – and the nominee of about half a dozen more – Mantello is responsible for smashes across the genre spectrum, from the dark thrills of Stephen Sondheim’s musical Assassins to the intimate tragicomedy of Mart Crowley’s landmark 1960s gay drama The Boys in the Band.

And now, as part of regular collaborator Ryan Murphy’s plan to gradually take over the entirety of Netflix’s programming (a joke, but only slightly), Mantello has pulled off a two-for-one production coup that extends his reach beyond the Great White Way. By assembling the same marquee cast as he used on the stage in 2018, Mantello has adapted his own remount of The Boys in the Band for the big (or whatever-sized) screen.

Ahead of premiering this new-but-old-but-also-new version of Crowley’s work, Mantello spoke with The Globe and Mail’s Barry Hertz about reviving history, getting the band back together and the future of live theatre.

Review: Netflix’s The Boys in the Band revisits history, but doesn’t quite revive it

Crowley’s original play is an interesting artifact, from a very specific time and place. How do you think it has stood the test of time in the half-century since it was first produced?

It’s interesting that you chose the word “artifact,” which I guess is absolutely true in the liberal sense of the word. It implies to me something that no longer has resonance, but to me ... well, I guess I felt the same way when Ryan first approached me to discuss it. Then it became my job to find the resonance in it, and I like to think that we have.

When Ryan Murphy brought it to you, how did you two collaborate so you’re not just revisiting history, but revitalizing it?

Both of us are pretty instinctual people, so I don’t think that we spent a whole lot of time intellectualizing it. He trusts his instinct, and I feel similarly. I just assumed there was something inherently modern about us doing it. On some meta level, you have nine gay actors and a gay producer and a gay director who are looking at this material that’s part of our history. That fact alone tells me that we’re going to bring something to it that’s unexpected or unexamined.

In terms of casting those nine men, you’ve had working relationships with Andrew Rannells, Zachary Quinto and Jim Parsons before. But how difficult was it getting those puzzle pieces together not just once, but twice?

It’s interesting because I think the only time that’s happened before is William Friedkin’s film of [Crowley’s play], in 1970. Casting was key. We started with our friends and people we liked to work with, and for me, I was just thinking of the Broadway revival. Ryan always had the intention to make a film out of it, but I didn’t focus on that until after. When Ryan says we’re going to do a revival and then a film, you’re slightly skeptical. But then you remember it’s Ryan Murphy. Oh yes, of course that’s going to happen.

Were there any lessons you used here from your first film, 1997′s Love! Valour! Compassion!?

That was an entirely different experience. Gay movies as a genre at that time were very niche, very small, limited release. The schedule and budget reflected all that. When you’re working for a platform like Netflix, they’re willing to invest the time and money and creative energy to make it the best it can possibly be. I didn’t feel like there was a ticking clock as much as I did the first time, which was incredibly stressful.

What are your thoughts on the future of Broadway? Can you afford to be optimistic about the state of live theatre?

In the long run, I am. There is a yearning to get back to those theatres, because there’s something about that ritual that sustains people’s spirits. There will always be that need. But I’m not in the rooms for those discussions with the various smart people who have to make those determinations of when it will be safe to go back. It’s all rumour and speculation at this point. The one thing that nobody wants is to open up, get started and then have to shut down again. That would be incredibly destructive.

The Boys in the Band is available to stream on Netflix starting Sept. 30 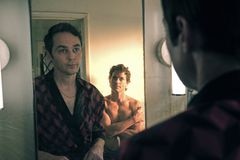