In Frankie’s opening scene, a woman tests the waters of a hotel pool before her morning swim. Much like someone diving into a David Hockney picture, her insouciant plunge shatters the picturesque tranquility and brings the moment to life. The screenplay by director Ira Sachs and his regular co-writer Mauricio Zacharias was named for that woman and written expressly for Isabelle Huppert, the actress who plays her.

Sitting down with Sachs and Huppert at their Toronto International Film Festival premiere this past September, the actress explains that she reached out to Sachs after seeing his Love Is Strange and Little Men. “Sometimes you watch films – sometimes, very rarely – and I thought there was something,” the French actress recalls. “I felt a connection with the tone, with the space; although Ira is clearly an American director from New York, I felt something very European – I felt I could have my place in this kind of film.”

The feeling was mutual, “meaning that, in reverse, also I think a lot about the cinema that Isabelle makes, be it Chabrol or Pialat, her body of work," Sachs says. By way of illustration, the director mentions one of her early roles: “I thought a lot about Entre Nous when we shot this film.”

“Ah … oui?” Huppert replies, surprised. “You never said that to me before!"

“Because in a way when I look at Marisa Tomei and Isabelle Huppert together, I see the images of that film,” Sachs elaborates, “because there’s something about the female friendship that is important to this film.”

Huppert plays eminent French actress Françoise Crémont – Frankie, to her husband Jimmy (Brendan Gleeson), family and to close friends like Ilene (the luminous Tomei), a movie hairstylist who flies in from a nearby shoot with filmmaker boyfriend (Greg Kinnear) to Sintra, where Frankie has gathered her extended family together on holiday for a reason.

For this ensemble film, Sachs and Zacharias drew on touchstone films of art-house cinema. The loosely overlapping narrative threads, setting and premise, for example, have inspiration in Kanchenjungha, Satyajit Ray’s 1962 movie about a patriarch at a Himalayan resort who’s attempting to control proceedings around an impending wedding (it’s why Sachs calls Frankie his “mountain movie”).

“That film really affected me, really had certain rules that I thought were really interesting,” he explains. “It takes place in one day, it’s a family on vacation, there’s nine stories, it begins in the morning and ends in the afternoon.” The Rules of the Game was also an influence, “to create characters that are both very real and also very theatrical and a little bit cartoonish. Pushing things a little bit,” Sachs says, “which I think Renoir gives you the permission to try.”

They also drew inspiration from the leading lady herself.

“I’ll say two things,” Sachs explains of the matriarch’s chosen profession, wry candour and familiar, seemingly unflappable façade. “One, in my mind the character Frankie is not as famous as Isabelle Huppert. And that was really something that I thought about – that she’s a successful actress but she’s not an iconic actress,” he says, turning to his lead, “which you are. The other is that element you mention. That was something I could write for, that I could hear – having known Isabelle for a couple of years.”

Both are women who do not suffer fools or, as one of them says in the movie, any kind of bull. “And there is within that a warmth that is really beautiful,” Sachs adds.

That tenderness is evident, for example, in a memorable moving scene where a group of locals spontaneously enfold Frankie into their birthday celebrations.

“She’s happy to have this little private moment away from the family with these people that she doesn’t know,” Huppert says. “I love the scene. She’s a well-known actress, but on the other hand, she’s really happy to become almost … anonymous … with all these anonymous people.”

Sachs chimes in that he’s been out until 3 o’clock in the morning with Huppert in Toronto, “because she’s always interested in going to the next thing. And to being open to things. And I think that’s why she has a really interesting creative life. Because she follows her instincts and she’s not scared.”

Given the just 30-day Portugal shoot, the movie’s three-part structure was also influenced by the capricious weather. In one exchange shaped by the setting, Huppert and her son (Jérémie Renier) have a heart-to-heart about legacy and inheritance while walking in the woods.

“I think it would be different if we were, for example, sitting in a room for that,” the actress says of the winding rhythm necessitated by the landscape. “It immediately strikes me, that certain way of having certain things being said that really match the pace of a walk. There is something so cruel and so brutal in that scene, what she speaks about. I think it helps to say all these things in that forest, walking, walking.”

“What’s interesting is how nature dictated a lot of the blocking and the situations,” Sachs adds of another scene, with Huppert and Kinnear, originally written as a walk-and-talk that ended up as them trapped together, taking shelter from a downpour. Ultimately, it made the moment more effective.

“We had to engage and accept nature – which is the theme of the film, so in a way we were playing that out in real time as well.”

Frankie opens Nov. 8 in Toronto and Vancouver, and Nov. 15 in Montreal 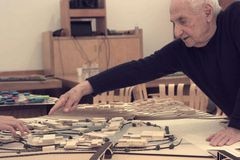 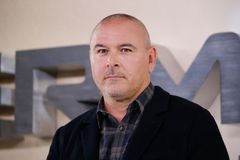