For its 29th edition, Inside Out is going Hollywood.

The Toronto LGBTQ film festival will open its 2019 lineup with the anticipated Elton John biopic Rocketman starring Taron Egerton on May 23, a week ahead of the film’s wide release (and a week after it makes its world premiere at Cannes). But that’s not the only splashy and star-heavy production heading to this year’s Inside Out: the festival will also host the Canadian premiere of the comedy Late Night, starring Emma Thompson and Mindy Kaling and directed by Vancouver filmmaker Nisha Ganatra, and the Canadian premiere of Netflix’s relaunch of Armistead Maupin’s Tales of the City, starring Ellen Page and Laura Linney.

Perhaps, though, it is more accurate to say that Hollywood is going Inside Out.

The industry is, after all, making slow but steady steps toward wider representation of LGTBQ characters and stories. This year’s Academy Awards, for instance, featured LGTBQ-themed films in almost every category, with standouts including Can You Ever Forgive Me? and The Favourite. So while opening a traditionally independent-cinema-focused festival with the four-quadrant-friendly Paramount Pictures blockbuster Rocketman might seem like an odd fit, it could also be viewed as a win-win situation for onscreen representation as a whole: Hollywood proves that it is committed to telling diverse stories, and Inside Out gets a big celebrity-friendly spotlight that will, ideally, extend to highlighting the festival’s more independent and emerging voices.

Some of these lesser-known Inside Out titles include the world premiere of Brad Michael Elmore’s horror comedy Bit, starring trans actress Nicole Maines; the world premiere of Mike Doyle’s romantic drama Sell By starring Scott Evans, Zoe Chao and Patricia Clarkson; the international premiere of the drama Good Kisser, which looks at a relationship between three women and arrives courtesy of Inside Out veteran Wendy Jo Carlton; and the international premiere of Jeffrey McHale’s You Don’t Nomi, a documentary exploring the legacy and critical reassessment of Paul Verhoeven’s originally maligned 1995 film Showgirls.

“We have 11 days of meaningful queer stories in all forms, from musical fantasies, vital documentaries, short-form narratives, and episodic work that represents the vast diversity in experience, access and crisis across our LGBTQ2S communities,” Andrew Murphy, Inside Out’s director of programming, said in a statement. “Bookending Inside Out with two of the summer’s biggest releases, Rocketman, the fantastical biopic of a gay icon, and Late Night, a female-driven comedy tackling misogyny and white privilege by one of the most sought-after queer directors – beautifully demonstrates a festival reaching for the stars whilst our feet are firmly planted in our communities here and around the world.”

Although Inside Out is Canada’s largest LGTBQ film festival – and Toronto’s third-largest film fest after TIFF and Hot Docs – this year’s lineup is slightly smaller than last year’s edition, with 40 feature-length films compared to 2018′s 49 selections. Yet this year’s edition expands into television, with its new “Episodic” program, which will feature six series premieres, including Starz’s Vida, and Netflix’s Tales from the City and Eastsiders (the latter two productions courtesy of a new four-year partnership between Inside Out and the streaming giant).

“The strength and diversity of this year’s lineup demonstrates the vital role that LGBTQ film festivals play in today’s industry landscape,” Andria Wilson, Inside Out executive director, said in a statement. “The exceptional range of titles our programming team has secured ... show Canada and the world that Inside Out is committed to leadership and innovation as we head toward our 30th anniversary.”

Inside Out runs May 23 through June 2 (insideout.ca)

Hot Docs 2019: How can filmmakers reap the rewards of this golden age? One Canadian organization may have the answer
Subscriber content
May 2, 2019 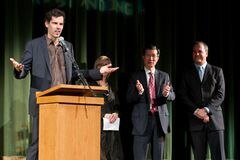