As depicted in Brandon Cronenberg’s new gross-out sci-fi thriller Possessor, the process of taking over someone’s mind and body is easy, if not exactly painless: jab an electrode into their skull, connect via a remotely secure MRI-like device, and voila: you are now in complete control of someone else for a few days. The process of getting Possessor from Cronenberg’s brain to the reality of our world, though, was far more complicated. And about as painful.

Three years after premiering his debut feature, Antiviral, at the Cannes Film Festival in 2012, Cronenberg delivered the first draft of his Possessor script to producer Niv Fichman, of Toronto’s Rhombus Media.

“Because Antirviral was my first film, I didn’t have anything else prepared. I didn’t have a career at that point, so I had to start from scratch afterward,” Cronenberg says today. “I knew I wanted to continue making films, but you don’t have a bunch of things in development when you’re just starting out.”

After a rewrite, Cronenberg’s tale of an assassin who takes over the brain of a low-level drug dealer was able to secure casting. The names sitting atop a movie poster are so critical for Canadian films, which typically seek the final piece of their financing puzzle abroad, after going through the usual routes of Telefilm, provincial funding offices, and private equity. Familiar performers mean that a film can more easily sell in other territories.

Christopher Abbott, a darling of the U.S. indie scene thanks to his performances on HBO’s Girls and in the movies James White and It Comes at Night, signed on in early 2017. Andrea Riseborough, the firecracker star of The Death of Stalin, Netflix’s Bloodline and too many other productions to list here, came aboard in September that year, right after meeting Cronenberg at that fall’s Toronto International Film Festival. Shooting was scheduled for early the next year. Easy, right?

Well: During pre-production in late 2017, the plug was pulled as the producers couldn’t reconcile the cast with the “desires and ambitions” of their international sales agent. (“It’s always a question for me as a producer whether you finance the film first and then go for casting, or get a sales agent based on the cast you have,” says Fichman, “because each of them could blow up in your face.”) After replacing the sales agent, and sticking with Abbott and Riseborough, shooting was rescheduled for the fall of 2018. But then Riseborough smashed both her knees on the Morocco set of Amazon Prime Video’s drug-trafficking series Zero Zero Zero, and the plug was pulled again. Once she healed, Abbot had other commitments on his schedule. But, finally, shooting commenced in April 2019.

It has been a long journey. Even for a filmmaker whose last name happens to be Cronenberg. Which, aside from delays, is probably the one thing that Brandon least wants to talk about.

“I’ve been dealing with those comparisons even before I started making movies, when I was trying to be a visual artist and people were comparing my drawings to his films,” says the younger Cronenberg on critics', and audiences', tendency to tie his work with that of his father David’s. “It’s something that’s inescapable, and honestly I don’t really pay too much attention to it. I’m making films that are honest to my own creative impulses and interests.”

If those interests just happen to involve exploding heads and humanity’s perverse relationship with technology – subjects explored by David in everything from Scanners to eXistenZ – then so be it. But Possessor also stands apart. From the film’s tremendous, and tremendously gross, in-camera effects to the sharp casting that so bedevilled the film from the get-go, Possessor is the product of a singularly sick vision.

“Brandon had expressed nothing but assuredness and devotion throughout, so you wanted to match that,” adds Abbott, who stayed committed to the project despite knowing it would eventually require him to get up close and personal with some truly gross practical effects. “There was one time where it looked like there was a falafel sandwich stuck to my face for the whole day. It was cumbersome, but worth it.”

“We’ve been carrying it for such a long time before it came to fruition, but it was ready to come out of the oven,” adds Riseborough. “Brandon has this extraordinary vision. We fleshed this out for years before we actually shot it.”

Of course, getting a film shot is one thing. Now, Cronenberg and his team have to reckon with the reality of releasing a film in the midst of a pandemic. After premiering to strong reviews at the Sundance Film Festival in January (“Bathed in blood and gore and unrelentingly aggressive!”), Possessor was picked up for U.S. distribution by upstart indie powerhouse Neon (Parasite, I, Tonya) and given a summer release. Oops. By this point, though, a delay was nothing new for Cronenberg, who will now see his film play select Canadian and U.S. theatres this weekend – or where theatres happen to be open, that is.

“I don’t fetishize the theatrical experience as much as some directors do,” Cronenberg says. “The main difference is that not as many people will see it in a theatre. But as long as they get to watch it somehow and some time, I’m happy.”

At the very least, Possessor – which is being released under the full title Possessor Uncut – will stand out in a theatrical market starved for new releases. (This Friday was supposed to mark the release of Wonder Woman 1984, but due to COVID-19 there are few theatrical competitors to contend with.)

“You not only stand alone in the marketplace right now, but it’s also a good time because this kind of film has a specific fan base, who really want to see it in the cinema,” says Fichman.

Whatever the reception to Possessor might be, this time Cronenberg already has a follow-up in motion. Actually, two: the “tourist-resort satire” Infinity Pool, and Dragon, a “space horror film with a hallucinatory angle.” Although both sound as intense as Possessor, perhaps the development this time around won’t be quite so bloody. 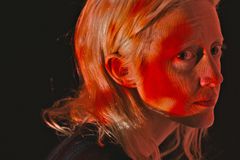