It was the role Kathleen Robertson, the Hamilton-born actress, had been waiting for. She’d grown up working on Canadian television – she landed her first gig, a National Film Board project made by Norman Jewison, at the age of 10 – and come of age on the U.S. megahit Beverly Hills 90210, where she played brainy, bratty Clare. Her career had chugged steadily upward – she never held a single civilian job, not even waitressing. Now it was 2011, and she was on a prestige series, Boss, playing the morally compromised aide to the mayor of Chicago, opposite Kelsey Grammer. It was everything she’d ever wanted. And it wasn’t enough.

“It didn’t feel like I thought it should,” Robertson, 45, said on the phone recently from her home in Los Angeles. Her voice is deep and snappy, full of intelligence and humour, along with a habit of self-deprecation. “Though I was doing it at the highest level, and I loved it, I was still a cog in the machine. I didn’t have control.”

Robertson had a secret, and not the kind that benefits a pretty actress who was doing just fine, occupying a comfortable niche inside the Hollywood box (recurring gigs on series; Lifetime women-in-peril telefilms). Her secret was a dismissible, almost risible one: She was a writer. She had drawers full of journals, short stories and, yes, screenplays. She’d optioned a novel and paid for it herself.

Her husband, the producer Chris Cowles (Chappaquiddick, Blockers) – they married in 2004, and have two sons – kept telling her, “You’re a writer. It’s real.” Finally, she showed her work to her business team.

It was like jumping into a speedboat. She was chosen by the Humanitas Project (a non-profit that gives financial support to writers who “encourage viewers to truly explore what it means to be a human being”) as a writer to watch. The script she wrote, called Layover – about a flight attendant, very Girls meets Up in the Air – caught the eye of producer John Wells (ER). Soon she was working with Jason Reitman, developing a film version of The Possibilities, based on the novel by Kaui Hart Hemmings (The Descendants); and with Julia Roberts, developing the novel Little Bee into a film for Amazon; and with Charlize Theron, on a 1970s-era series about the creation of the Dallas Cowboy cheerleaders.

“I’m the girl from 90210, so when I say I’m a writer, everyone’s first reaction is terrified,” Robertson says with a snicker. “Then once they read something, they exhale, because it’s not awful. Hollywood is a popularity contest, so nobody will take a risk on you until someone like Jason Reitman tells them to. Then the minute you’re hot, you’re hot.”

Still, she acknowledges, “It all kind of exploded, in a way that has been shocking to me. Either the world really needs female voices, or I’m just really getting lucky.”

Any way you slice it, it’s a lot of work, especially for a mother of two children younger than 10. But Robertson is a perpetual-motion machine. She spent the third season of her most recent acting gig – playing a police officer opposite Taye Diggs on Steven Bochco’s final series, Murder in the First – “very, very pregnant,” she says, “hiding behind garbage cans, holding a gun, yelling ‘Freeze!’” As that series was ending, her agent sent her the pilot script of the CBC family drama Northern Rescue, and she signed on almost immediately. (It premieres on March 1.)

It ticked her boxes. First, she’s not the lead – that’s William Baldwin. He plays John West, a search-and-rescue captain and recent widower who moves his three kids north from Boston to remote Turtle Island Bay (played by Ontario’s Parry Sound). Robertson plays Charlie, his free-spirited sister-in-law, a role that leaves her time to write.

Second, Northern Rescue is old-school network drama, mild thrills mixed with loving and learning, and Robertson was craving that. “As an actor, if it’s a really heavy, dark, screwed-up, damaged character, I’m the go-to,” she says, laughing. “I never sounded like an ingénue. I’ve never been the girlfriend. I’ve always been more cerebral.” But spending days on sets “curled up in a ball, weeping, can get tiring. It’s nice to be part of something kinder. Especially at this time in the world, when things are so challenging, this feels hopeful and positive.”

Third, the days of Robertson “going off to Bulgaria for these crazy acting jobs are over,” she says, laughing again. She and her family were delighted – and relieved – to spend the summer on a lake near Parry Sound. “I don’t know why I’m here [in L.A.],” she admits. “I don’t know how much longer I’ll be able to live here, if things don’t change. Every day, the news about Trump, it’s a horror show. There’s no pretending that it isn’t. Even my 10-year-old is like, 'Mom, we need to move to Canada.’”

Robertson’s childhood in Hamilton – her mom was a homemaker, and her dad an interior decorator who owned a store, Robertson’s – exposed her to both cultural events and Steel City grit. That kind of tough/tender juxtaposition runs through her writing, too. Her breakthrough script, Your Time Is Up, about a psychologist in the aftermath of her mother’s suicide, has a Six Feet Under vibe. (She wrote it as a TV series, to which Christina Applegate had been attached; now she’s rewriting it as a feature.) The Possibilities is about a woman who suddenly meets her dead son’s pregnant girlfriend. She’s working on a feature, Lady Killer, for the director Michelle MacLaren (Game of Thrones), about a 1950s Avon lady who’s also an assassin.

“I love things that sound messed-up and depressing, but are also funny and hopeful and beautiful,” Robertson says. “The plastic-bag scene in American Beauty” – a discarded bag dances through the air, becoming oddly moving – “sums up everything I want to write about.” She keeps a card with the dialogue from that scene on the bulletin board in her office.

One of her projects – adapting the film Swimming with Sharks, about a cutthroat female talent agent, into a series for Jeffrey Katzenberg’s new company – recently slammed into the #MeToo movement, and not just because Kevin Spacey had been a producer. (He’s no longer involved.) “Even with Kevin gone, the subject matter was too dangerous for a while,” Robertson says. “People in Hollywood were reluctant to do a piece that put a powerful woman in any light that wasn’t positive. But it’s very much about what it is to be a woman in Hollywood in this post-Harvey-Weinstein world. Of course I want to write strong woman characters. But I want them to be authentic. I don’t want to write just badass symbols. I want to write human beings.”

Now, the big question: Why does Robertson keep her writing and acting worlds so separate? Why doesn’t she write something for herself? “No one understands why I’m not doing what Lena Dunham or Tina Fey do,” she admits. “The truth is, I don’t know why.” When I press her, she just repeats that, in a mock wail: “I don’t know. I don’t knoooow!”

She sighs. “The thing I struggle with, I never allow myself to stop and actually feel it [success]. I’m always blinders on, laser beam ahead. I don’t sit and feel, ‘Wow, this is cool!’ I don’t allow myself to.”

Maybe a Hollywood niche is harder to escape than Robertson realized. Maybe, despite her savvy, she’s internalized a smaller vision of herself: the girl from 90210 who goes to Bulgaria to shoot Lifetime movies. Maybe one day, she’ll write her way out of that – she’ll have convinced enough people that she’s more, that she’ll finally convince herself. That’s a story I’d like to see. 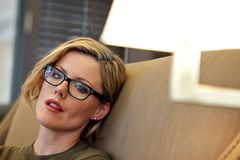