On Aug. 9, 1970, British Black Panthers organizers Altheia Jones-LeCointe and Darcus Howe addressed a crowd of 150 demonstrators gathered outside of the Mangrove Restaurant on Notting Hill’s All Saints Road in London.

The group had come together to protest the systematic surveillance, harassment and violent targeting by the London police force of the local West Indian restaurant and community hub, owned and operated by civil-rights campaigner Frank Crichlow.

Before her wrongful arrest, Jones-LeCointe spoke of the rights of Black Britons and the wrongs of a white supremacist state whose neglect of its Black citizens was the very least of its evils. She came to the aid of a woman injured by one of the more than 200 police officers who were present under the auspices of observation, but whose presence functioned wholly to violently antagonize, harass and detain the demonstrators.

Arrested for “incitement to riot” alongside Howe and Crichlow – as well as Barbara Beese; Rupert Boyce; Rhodan Gordon; Anthony Innis; Rothwell Kentish; and Godfrey Millett – Jones-LeCointe and her fellow activists came to be known in the press as the Mangrove Nine.

When I spoke recently with actress Letitia Wright about this history, newly dramatized for the screen by writer-director Steve McQueen as Mangrove, the first instalment of his Small Axe anthology film series for Amazon Prime Video and the BBC, we were both keenly aware of the impact of Jones-LeCointe’s legacy.

“You don’t often get the opportunity to represent a character like Altheia,” Wright said. “When you get an opportunity like that you not only must make the most of it, but you also become a vessel for something important, something bigger than yourself.”

For his five-film depiction of London’s West Indian communities as they lived through the late 1960s to the mid-1980s, the London-born McQueen, who is of Trinidadian and Grenadian heritage, has brought together not only a filmic space of cultural celebration, but a shared cultural history amongst its makers. Particularly beloved for her role as Shuri in 2018′s Black Panther, Wright was born in Georgetown, Guyana, and raised in Tottenham, North London, from the age of 7 onward. It was her roots and connection to Caribbean culture that immediately had her vying for the role of Trinidadian-born activist and central member of the British Black Panthers, Altheia Jones-LeCointe.

“With this role, I felt as if the stars had aligned," Wright said. "I relate and connect to her deeply and, in terms of her activist work, Altheia has enabled me to learn so much more about our shared histories.”

The record of Jones-LeCointe and her Mangrove Nine peers was not one to be adapted lightly. Wright shares that McQueen, who developed the Small Axe project over the course of several years, was meticulous in his research and acts of citation, to the point of bringing on celebrated Guyanese-British historian and academic Paul Gilroy as series consultant.

“McQueen and the producers dived into the history of Caribbean life in 1960s and 1970s London," Wright said. "They provided us with an extensive amount of research and interview materials in order for us to fully shape the film.

“For me,” she continued, “it was about diving into that period and its politics, not only just in the U.K., but in America, Africa, Trinidad, the Caribbean. The culture, the music, the food. Well, the food was a no-brainer. That part was easy.”

In Mangrove, there is an undeniably loving texture, both visually and narratively, to the cultural comforts and touchstones which pattern the lived-in vitality and home that McQueen makes of and in West Indian life. It punctuates its stark realism in regard to the anti-Black violence faced by its West Indian community with equal measures of life lived in full, whether it be the shared experience of food, music or cultural kinship. Likewise, Mangrove is rife with references and gestures toward the legacy of West Indian figures such as the influential Trinidadian historian C.L.R. James or Jamaican activist and national hero Paul Bogle.

McQueen is also quick to acknowledge the West Indian women who were crucial to this moment of history. I asked Wright, who spoke at length with Jones-LeCointe ahead of filming, how, especially as younger Black women, we often feel both honoured and anxious about being asked to live up to the greatness of our elders.

“Being able to represent her onscreen is something that I cherish and that I honour,” Wright said. “Altheia is someone who elevates and supports her people; she is the definition of leaving the world in a better state than when she met it. I felt that immediately when I met her. She left an impact on me that she probably didn’t expect to leave.”

Jones-Lecointe is one of countless West Indian women whose labour and efforts are vital to the radical shared political histories of Black British and West Indian resistance. Alongside women such as her sisters Beverly and Jennifer Jones, Olive Morris, Elizabeth Obi, Claudia Jones, and elders such as Amy Ashwood Garvey and Una Marson, Jones-LeCointe and her fellow revolutionaries are part of a transnational, transgenerational political constellation that, both communally and singularly, enacted (and continue to enact) the material means to both centre and protect West Indian women and girls from the forcible confluence of anti-Black racism and sexism.

“Meeting her infused me with the importance of self-love,” Wright said. “Self-love as a young Black woman and appreciating myself in my different forms and ways of being. Loving myself anew, whether it’s through my skin or through my hair. As a Black woman, meeting her was so meaningful to me.

"She lifts you up and inspires you. She makes you feel encouraged and elevated when you’re in her presence.”

Mangrove is available to stream on Amazon Prime Video starting Nov. 20 in the U.S.; it will be available in Canada at a date yet to be determined. 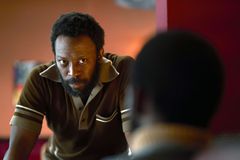 Letitia Wright steals show in 'Black Panther' breakout role
February 19, 2018
Follow us on Twitter @globearts Opens in a new window
Report an error Editorial code of conduct
Due to technical reasons, we have temporarily removed commenting from our articles. We hope to have this fixed soon. Thank you for your patience. If you are looking to give feedback on our new site, please send it along to feedback@globeandmail.com. If you want to write a letter to the editor, please forward to letters@globeandmail.com.
Comments