The new film from writer-director Lee Isaac Chung, loosely based on the story of his own parents – South Korean immigrants making a go at farming in rural America – has been the focus of an interesting wave of online fury in this very strange film awards season. It all stems from the Hollywood Foreign Press Association’s decision earlier this month to nominate the drama for Best Foreign Language Film instead of in one of the Globes’ two Best Picture categories, owing to more than 50 per cent of Minari’s dialogue being presented in a language other than English.

In some corners, this has been used as evidence of the HFPA’s, and by extension Hollywood’s, inherent racism: How could a film produced by an American company (indie powerhouse A24), written and directed by an American filmmaker (Chung was born in Denver), and set in the American heartland be considered “foreign?” Which leads to the question of whether awarding a “foreign-language movie” is also a conferral of less respect and prestige than “Best Picture” alone?

It is all very messy – although maybe less so when you also consider that A24 in fact submitted Minari for the Globes’ Best Foreign Language Film category. And, according to reports, there has been no official appeal from producers to the HFPA to consider the film in the Best Picture category. (More egregious are the Globes’ snubs of Chung and his performers, including Steven Yeun, Han Ye-ri and Youn Yuh-jung.)

But the Golden Globes issue also distracts from the fact that Minari, named after a vegetable frequently used in Korean dishes, is a thoroughly excellent film. Designed for audiences no matter their language or culture, Chung’s fifth feature film is a big-hearted, beautiful family dramedy. Ahead of Minari’s digital release in Canada this week, The Globe and Mail spoke with Chung about kindness, community and Mountain Dew.

One of the things that caught me off-guard about Minari was the kindness that permeates the movie. Watching the trailer, there’s that shot where something is on fire and I spent the entire film worrying, “Oh god, racists are going to kill this family.” But it’s not about that.

It’s something that I thought about a lot in these past few years, as we’ve had a real shortage of that kindness and community. Kindness is not something that comes naturally to me. My mind and heart go in very dark places, but that’s not what I want or desire. And that’s what I wanted to do with this film. In some ways, I felt like I was leaving something behind for my daughter. I wanted it to be true to the things that I hope for, and hope for her. I didn’t want to take a cynical approach, even if those circumstances are realistic. I wanted to go toward an area of hope and idealism.

Did you feel that your own youth was full of such hope and idealism?

In pockets. Our experience was honestly harsher than what I made in the film. But I don’t want to bring people through that, and I don’t want to relive those things. I want to focus on the times that I did see love working itself out in my family, or reasons for hope. Those are the things that will ultimately last. And it fits with the spirit of the plant minari itself. Minari is thriving by the end of the film.

Maybe I’m overreading this, but it’s interesting that Steven’s patriarch character wears a red baseball cap throughout the film. There is just such an association, for certain audiences, with the “Make America Great Again” hat. Was that a purposeful subversion on your part?

It’s funny, because when Steven showed me the hat that he wanted to wear, it did occur to me that people would think about the symbolism about it. But Steven chose that hat, and just found it fit well and looked good. And he was right. But I knew that we were in some way addressing the idea. My hope for this film is that 10, 20 years from now, how will this be remembered? To me, the MAGA hat will not have much importance then. I doubt people will remember it. But I feel that Jacob with his red hat on the tractor trying his hardest to do the right thing for his family, that’s an image that will last. This all sounds self-aggrandizing, I know.

A lot of filmmakers might tackle their own youth or family history in their first film, but you chose to mine it for your fifth.

I remember reading an interview with director Edward Yang, and he said something about how he had a story about a family across multiple generations in his head for some time, but didn’t feel he was ready until he made Yi Yi. I can relate, because I felt I needed to get to a certain point to understand my own perspective as a child, and the perspective of my father. I’m so glad I waited because I needed to go through my own broken dreams, failures, difficulties, the stresses of life. All that was the texture of what led my dad to reset and start a farm in Arkansas. Once I started to work on the script in 2018, it all came out so quickly. I think it was just waiting to flow out.

How did you approach balancing the perspectives of the father Jacob, played by Steven, and his son, David, who I assume is your stand-in? You have the severe struggles that Jacob goes through, but then silly moments where David tricks his Mountain Dew-loving grandmother into drinking pee.

I like movies that have lightness and seriousness all wrapped in one, almost like an old Yasujiro Ozu film where they have fart jokes alongside talks about life and death. But the big challenge was to get away from my own dad’s perspective and invest my own into it, as well. How to preserve him and honour him, while also separating him from me. It was a counterintuitive sort of process.

Have you had an opportunity to watch the film as a family?

Oh yes, we did that before we premiered at Sundance last year. It was a magical screening – just watching together and getting very emotional and hugging and embracing afterward. I thought my parents might be more upset by what I had done. But they felt seen.

I don’t suppose you served any Mountain Dew at the screening.

Minari is available on-demand, including Apple TV/iTunes and the Cineplex Store, starting Feb. 26. 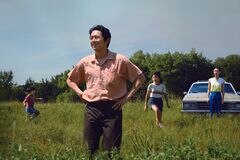