A bearded seaman awakes to find his boat trapped in sea ice and climbs out into a white world full of unfamiliar threats, including falling trees and a polar bear. He is about to succumb to this hostile new environment when he spies a cabin promising heat and light.

Is that a metaphor for our current situation? Most certainly, since it’s the scenario of a three-and-a-half-minute animated short made during the pandemic and tied to the theme of light at the end of the tunnel.

Le givre de Bobby-Yves (Freeze Bobby-Yves) is the creation of Bogdan Anifrani and Ranee Inez, two young filmmakers from Montreal who were invited to create a short for National Canadian Film Day. On April 21 that annual celebration of movies made in Canada is offering a feel-good program that includes the classic 1979 comedy Meatballs plus a tribute to the late Christopher Plummer, as the event marks its second year with online streaming replacing the usual cross-country lineup that would feature hundreds of live screenings. Programmers this year also chose to promote emerging filmmakers by soliciting 11 shorts from 15 talents working to address a hopeful theme. Light(s) at the End of the Tunnel streams in prime time on the National Canadian Film Day website as the centre-piece of this year’s one-day festival.

Freeze Bobby-Yves, with its charmingly inventive use of white space, is one of three animated shorts, along with two other non-verbal pieces – Christopher Grant’s Tussle, in which a face emerges from abstract shapes, and Dylan Glynn’s On Fire, which plays with sketches of familiar urban imagery from 2020. The festival also includes some impressive special effects, such as those in Namid where Victoria Anderson-Gardner and Sagi Kahane-Rapport use body-capture technology to produce a ghostly Anishinaabe shawl dance against a night sky.

But when it comes to live performance, the directors (working on budgets of $10,000 in the midst of the pandemic) had to make do with what little they had at hand: Several took immediate documentary approaches. In 5:1, Sara Ben-Saud produces a touching mini-doc about her own family as her parents and her two young-adult siblings discuss (in French) life together in lockdown. “It was a gift to have the three of you together,” Ben-Saud’s mother says as they laughingly recall how she used to cry walking by her daughter’s empty bedroom when Ben-Saud first left home. Similarly, in 7:59pm, Mile-End, Mattias Graham interviews two Montreal night workers – the musician Thanya Iyer and the restaurant manager Johnny Similien, coincidentally or not, both BIPOC – about their newly empty evenings. They are both philosophical and grateful for time to slow down and connect with what’s important in life, while suggesting the Black Lives Matter movement benefited from people with time on their hands.

In contrast, several of the works are ambitiously poetic or deploy a stream of consciousness. Andrew Huculiak’s SARS-CoV-2 reproduces the frantic mental landscape of lockdown; in Only Light Will Touch Us, Alicia K. Harris films a single Black man playing with his shadow inside his bedroom, a space that is both safe and confining. In the wry Divinations, Simon (Paul M) Mutabazi and Daniel Boos follow a sorrowful man (played by Mutabazi himself) as he consults a string of fortune-tellers over the phone, receiving painfully predictable readings: He’s stressed; he’s suffering, etc.

That poignancy carries over to Ryan Steel’s I’ve Got Blisters on My Fingers, a small bit of cinema realité about Jesse, fired from his job because of COVID and unable to afford the bus fare home. The production values are absolutely minimal but you can’t help but feel for the young man as he walks along a busy suburban boulevard in failing light crooning a surreally inappropriate Valentine song.

There are laughs, too: In Shoot your Shot, by Madison Thomas and Meegwun Fairbrother, Tover (Skye Pelletier) battles an alien invasion, but what really has him worried is his inability to tell Savoy (Victoria Turko) that he loves her. That barebones sci-fi comedy includes an amusing sign inspired by those safety banners you see in factories: “Days since last alien attack: 5.” At the beginning, as Tover blasts away at unseen enemies, Savoy comes out and flips the number back to zero.

That may not suggest light at the end of the tunnel, but the almost farcical cycle of chaos and threat feels decidedly familiar.

Light(s) at the end of the Tunnel screens at 7 p.m. April 21 at canadianfilmday.ca

Doris Slater Titus, a forgotten Canadian artist, gets the exhibition she deserves
April 9, 2021 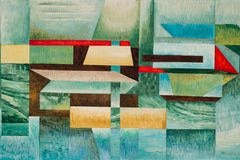 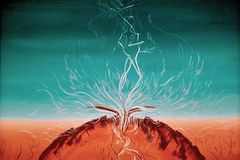 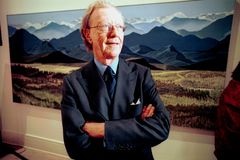