The question had to be asked.

Over the phone, the Montreal-born director Stephen Campanelli is relaxed, friendly, eager to communicate. He read Richard Wagamese’s acclaimed novel Indian Horse, he tells me, followed by Dennis Foon’s film script, and was electrified by them. As a Canadian, he was angered and embarrassed that he hadn’t been taught the history behind the story: Indigenous children ripped from their families, forced into residential schools and physically and sexually abused.

He wrote the producers an impassioned, six-page e-mail about what the book meant to him and why he had to direct the film. He wanted to open others’ eyes as his had been, to champion the story of Saul Indian Horse – a residential-school survivor and natural hockey player who struggles against racism, alcoholism and what exactly “Canada’s game” means. Campanelli has been Clint Eastwood’s go-to camera operator for 22 years, from The Bridges of Madison County through Million Dollar Baby to Sully. So when Indian Horse needed a financial and commercial boost, he called on Eastwood to be an executive producer.

But did he ever wonder if an Indigenous director should do the job instead?

“That’s a good question,” Campanelli answers unhesitatingly. “You’re the first person to ask me that. But for me, no. I just felt I was the person to tell it. I read hundreds of scripts. This one spoke to me. I knew I could do it. I had full confidence, which is very weird for me. I wanted other people to be affected and learn from it the way I did. My research, the depths I found about what happened. It basically changed my life.”

Wagamese, who was also an actor (North of 60), and who died in March, 2017, approved of Campanelli’s hiring and his vision. Although Wagamese never saw the finished film, Campanelli consulted with him and sent him rushes. “Richard was such a brilliant, prolific, poetic, cinematic writer,” Campanelli says. “I picked his brain as much as I could.”

In fact, Campanelli added more of Wagamese’s words to Foon’s script: the voice-over narration, lifted straight from the novel. “It’s Richard’s story, not mine,” Campanelli insists. “I didn’t impose myself on it.”

The film weaves together three periods in Saul’s life: his childhood in residential school, his teenage hockey playing and his struggles as an adult drifter. Saul No. 1 is played by Sladen Peltier, an 11-year-old newcomer from Ottawa who’s been on skates since he was two. At Little NHL (Native Hockey League) tournaments, the film’s producers put up flyers announcing open casting calls. Peltier’s mother brought one home, and his charisma won him the gig – over 500 other kids. “His acting was a little rough; he’d never even been in a school play,” Campanelli says. “But it was a leap of faith.”

Peltier is a lefty, but learned to play right-handed hockey to make things easier for the two right-handed Sauls who succeeded him: No. 2, Forrest Goodluck (The Revenant) and No. 3, Ajuawak Kapashesit, who is in his 20s, is Cree and Ojibwa, and grew up in Minnesota and Ontario. In a dual interview in a Toronto airport hotel, in-between hockey tournament games, Peltier lords his skills over Kapashesit’s.

“This guy didn’t know how to skate, and Stephen didn’t want to make his job harder,” Peltier crows.

“Even switching hands to shoot, Sladen is still the most talented hockey player I’ve ever seen,” Kapashesit says, emphasizing the word “talented” so it becomes both compliment and big-brother ribbing.

“That’s so nice. I wish I could say the same about you,” Peltier shoots back.

“It was hard because we had to use straight sticks and historically accurate skates,” Kapashesit continues.

“This is what he does,” Kapashesit says, laughing. “This is why I can’t go anywhere with him.”

The three Saul’s shared only a few flashback scenes, but the older two came to set to study Peltier’s mannerisms and idiosyncrasies. “They’d always be off in a corner yapping away together,” Campanelli recalls.

Although Campanelli tried to keep the mood light, his material was heavy going. It’s one thing to tell a kid in a horror movie that it’s all pretend. This horror happened. “Sladen’s a sensitive, wonderful soul,” Campanelli says. “At the end of long days, I had to hug him and make a silly joke to cheer him up from what he was going through.”

The scene in which Saul’s long braid was chopped off at the residential school was the hardest, because it was Peltier’s actual hair. “We were all bawling our eyes out,” Campanelli says.

“I wasn’t okay with it at first,” Peltier says. “But then my mom and dad had a talk with me. They said, ‘If you do this, it will help people heal.’” He donated his hair to wigs for cancer patients.

Both actors have relatives who survived residential schools. “My grandfather would talk to us about getting hit with the strap, not being allowed to speak Cree,” Kapashesit says. “All his siblings on the Cree side went to the schools. Cousins, too. People think of it as ancient history, a mistake that happened a long time ago. But it went on until 1996.”

As well, both actors are all too familiar with the racism Saul faces. “The war-whoops, people chucking stuff at us, that was tough to play, but we had to depict it accurately,” Kapashesit says. “It’s important that we show it, so other people can hear it. A lot of non-Indigenous people still don’t know anything about the Native communities that surround them, or the Native people who have lived here since long before any of their people came. That lack of knowledge – of interest – leads to a lot of misunderstanding.”

“When I had my long hair, people would always look at me different,” Peltier says. “Sometimes in hockey they’d pull on it. When I would go to the washroom, people would say, ‘This is the men’s washroom.’”

“I still get that,” says Kapashesit, who wears his hair long. “The after-effects of the residential schools are still felt in all our communities. As for what Canada or Canadians should be doing about that, I don’t have those answers. But I know that doing nothing isn’t appropriate. How about land? Or some money to help teach us to speak our native languages? Or to help us deal with the poverty and alcoholism that grew from the trauma of the schools? Formal apologies are fine, but they don’t fix anything.”

There was a second question I needed to ask Campanelli.

He said the book changed his life. How?

“I’ve learned so much about how First Nations peoples are connected to the earth and family and spirituality. I feel most North Americans have lost that connection,” Campanelli replies. “When the Indigenous actors came to set, they brought not only their mothers and fathers, but also aunts, uncles, grandmothers, kids. We had blessings every day on set. It opened my eyes. It changed my perspective on people in general. First Nations people are grounded in what matters most: protecting natural resources, protesting pipelines, supporting their families. That’s what we should all be doing.”

Canadians owe it to themselves and to First Nations peoples to learn this history, he continues. “It’s not a good part of our history, but it must be talked about. I’m happy to be part of that wave. After our screenings, I can see conversations starting, people in groups not leaving their seats.”

“Elders have approached me after screenings,” Kapashesit says. “They say, ‘This is my story.’ It opens up things in them that are hard to share.” Then he throws down a new challenge, an answer to “Now what?”

“But I don’t want to just do Native roles,” Kapashesit says. “Native people are more than just characters in buckskins in the 1800s. We’re students and professors, we’re working at the bank and putting money in the bank. We’re sitting here right now! I want to see more Native people in roles that are just roles.”

Last question: Directors, are you listening? 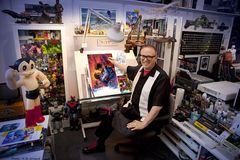 With Final Portrait, Stanley Tucci returns to the director’s chair for the first time in a decade
April 5, 2018 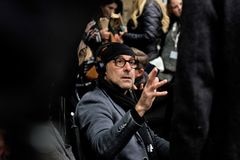 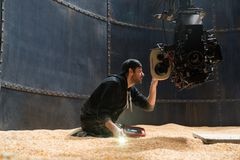