Green Book, which stars Ali as an African-American concert pianist in the 1960s and Viggo Mortensen as his driver, also took home the award for best original screenplay. The drama had faced criticism for its portrayal of race relations.

Rami Malek won his first Oscar on Sunday for his portrayal of late Queen frontman Freddie Mercury in the musical Bohemian Rhapsody, while Olivia Colman won the best actress award for her performance as a petulant monarch in historical comedy The Favourite.

Mr. Malek, 37, had emerged as a favorite for the Oscar in recent weeks after winning Golden Globe, Screen Actors Guild and British BAFTA awards.

Mr. Malek, a Los Angeles native of Egyptian descent, took on the role of Freddie Mercury, born to ethnic Parsi parents from India who moved their family to England when he was in his late teens.

Being neither a singer, dancer nor piano player, Mr. Malek did months of research and took voice, movement, piano and guitar lessons in order to capture Mr. Mercury’s accent, his strutting stage performances and the way he commanded a microphone.

The closing section of the film recreates almost move-by-move the Live Aid benefit concert in London where Queen played in July, 1985.

Filmmakers used a combination of Mr. Mercury’s real voice, Mr. Malek’s voice and another singer against the band’s original recordings to showcase Queen’s hits. The soundtrack is so closely interwoven that Mr. Malek has said he cannot tell who is singing at any particular point.

Mr. Malek has said that getting the prosthetic for Mr. Mercury’s famously jutting teeth, which he started wearing a year before shooting the film, was key to his performance.

The film also documents Mr. Mercury’s personal battles, including his struggle with his sexuality, and drug and alcohol use. In 1991, Mr. Mercury was one of the first British celebrities to die from AIDS, at age 45.

Bohemian Rhapsody was Mr. Malek’s biggest film role in a 15-year career as an actor. He was previously best known for playing the socially awkward hacker Elliot Anderson in TV series Mr. Robot. for which he won an Emmy award in 2016.

Other television and movie roles include Papillon and BoJack Horseman.

It was the first Oscar and first nomination for Ms. Colman, 45, who is one of the most beloved and prolific actresses in British television. Colman also won the Golden Globe and British BAFTA awards for her performance.

In The Favourite, sees Ms. Colman portrays Britain’s 18th-century Queen Anne as an insecure, frail and tempestuous royal who treats her horde of indoor rabbits as if they were her dead children.

Colman, who keeps a low profile in Hollywood but is regarded as a national treasure in Britain, has said she enjoyed playing the role of a woman who is “filthy and sexy and emotional and sad” rather than attempting to be “gorgeous all the time and a little bit sort of prettily flawed.”

The self-effacing actress began her career in England some 20 years ago, racking up credits on comedy sketch shows and in dramatic roles such as television police murder mystery Broadchurch and spy thriller The Night Manager.

She will next play the role of a middle-aged Queen Elizabeth in the upcoming third season of the Netflix drama The Crown about the British royal family.

Earlier, Ms. King won the Oscar for best supporting actress for her role as a mother trying to look out for her pregnant daughter in If Beale Street Could Talk.

It was the first Oscar for Ms. King, 48, who began her career in Hollywood more than three decades ago as a teenager on the 1980s sitcom 227.

Ms. King wiped tears from her face as she accepted her award, thanking her mother who was attending the ceremony with her.

“I’m an example of what it looks like when support and love is poured into someone,” Ms. King said. “Mom, I love you so much.”

In the Barry Jenkins-directed Beale Street, Ms. King plays the mother of a pregnant young woman whose future is ruined when her boyfriend is imprisoned for a crime he did not commit.

A prolific actress known for her mix of grit and warmth, Ms. King has for decades been a fixture on television and in movies, largely in supporting roles. Her breakout film role came in 1996 when she played the wife of Cuba Gooding Jr.’s character in Jerry Maguire.

This was the first Oscar nomination for Ms. King, who has claimed three Emmy Awards in recent years. She also won a Golden Globe Award earlier this year for her Beale Street role.

Ms. King has also been an outspoken advocate for gender and ethnic diversity in Hollywood. In her acceptance speech at the Golden Globes, she pledged that women would make up half of the staff on all of her projects in the next two years, saying “it’s going to be tough.”

Mahershala Ali won the award for best supporting actor for his performance in Green Book.

It’s the second Oscar for Mr. Ali, who won in the same category in 2017 for Moonlight. In Green Book, he plays Don Shirley, an African-American classical pianist who tours the U.S. South.

He thanked Mr. Shirley at the outset of his acceptance speech, saying telling the musician’s story pushed him as an actor.

Mr. Ali dedicated his win to his grandmother, who he said is always pushing him to remain positive.

Mr. Cuaron was favorite for the directing Oscar after winning multiple accolades for his lusciously shot black-and-white portrait of a domestic worker who cares for a middle class family in 1970s Mexico City.

He has said the film, made in Spanish and an indigenous language, was inspired by his own memories of growing up with his family in the Colonia Roma neighborhood of Mexico City. He also wrote and produced the film, which was made with mostly amateur or little known actors.

In a November, 2018, Reuters interview, Mr. Cuaron called the film “the story of one of the human beings that I love the most. One of the women that raised me.”

Roma was the most personal of the films directed by Mr. Cuaron, whose career began in television in Mexico in the early 1990s.

Ryan Coogler’s superhero sensation Black Panther was another early winner at a brisk ceremony that saw historic wins for diversity.

Ms. Beachler had been the first African-American to ever be nominated in the category. Ms. Beachler and Ms. Carter became just the second and third black women to win non-acting Oscars.

Spider-Man: Into the Spider-Verse won the best animated feature award. It is the first Marvel superhero film to win an Oscar.

The ground-breaking and mind-bending film about multiple spider-heroes from multiple universes gives Sony Pictures its first Oscar for animated feature, a category that has been dominated by Disney for its 18-year existence.

The show was opened by the rock band Queen, featuring former American Idol star Adam Lambert, who brought the A-list audience to its feet with We Will Rock You and We Are the Champions as celebrities such as Jennifer Lopez and Lady Gaga sang and waved along.

The performance celebrated the global success of best picture nominee Bohemian Rhapsody about the British band and its late front man Freddie Mercury.

Despite having no host, the first presenters – Tiny Fey, Amy Poehler and Maya Rudolph – found plenty to joke about.

“There won’t be a host, there won’t be a popular movie category and Mexico is not paying for the wall,” Ms. Rudolph quipped, referring to U.S. President Donald Trump’s lengthy campaign to build a wall on the U.S. southern border. 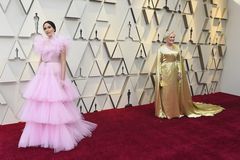