She has risen. Finally.

After debuting at the Toronto International Film Festival in September, 2019, the wonderfully disturbed horror film/character study/lesson in pain management Saint Maud is now making its way to video-on-demand this weekend after a series of pandemic-related delays. It is an appropriate enough resurrection given the religious themes found in writer-director Rose Glass’s feature debut, which follows a young hospice nurse (Morfydd Clark) whose blind devotion to God reaches terrifying heights of self-abuse as she cares for an aging dancer (Jennifer Ehle) in a quaint English seaside town.

Back in April, 2020, when hopeful jokes about lockdown ending soon were all the rage, I spoke with Glass about devotion, faith and making viewers squirm.

Thanks very much for taking the time to talk with me during ... well, all this.

Oh, well, my schedule is so busy during lockdown you know [laughs]. But I’m pretty lucky because I’m just living in London with a nice group of friends, my garden, the sun shining, I’m doing some writing ... I’m just getting a little bit less and less productive each day to the point where I’m mostly horizontal.

Well, hopefully this will be a distant memory soon. Is it strange, though, to be talking about a film not knowing when it might be seen?

Definitely, but life has felt weird for the last year any way: getting to make a film, then have it turn into this thing. The fact that I’m now doing interviews for it in my garden instead of a hotel room or conference room makes it more surreal. To be honest, though, it feels like it’s come out already, having done the festivals and surpassed my expectations. Everything from now is a bonus.

What was it like to watch the reaction of a full audience watching the film? I’m thinking especially about “that” scene .. you know ... when Maud puts her foot in her shoe filled with ... well, I won’t say it for our readers.

You know you make this whole thing in a tiny little vacuum, and you’re wondering about parts you hope come across as nerve-wracking and exciting. I think that scene in particular, well ... I had written a version in earlier drafts but replaced it with just Maud self-flagellating. But then I thought, well, Maud is a creative person so she should come up with a more interesting way of enacting penance. It’s a punishment but also something that she’ll get a kick out of. The idea came from a self-bondage website, which had a section where they had tips for people to make your experience that much more painful. That stuck with me. But when you’re shooting stuff, you don’t necessarily know what will stick out in people’s minds.

Would you say that you’re a squeamish person? Or, on the flip side, do you take a certain delight in seeing people squirm? One audience member I saw it with let out a huge yelp. It was funny, but I related, too.

I’ve always been the person from a young age who watches the films you shouldn’t. Shooting that stuff is fun! Like the stuff with Maud picking the scabs on her hand. I was stressed and not in a great place when writing the film, and I asked myself: Do people really want to watch a girl pick a scab on her hand? I guess: yes.

Do you view the film as a horror film first, or a dark character study?

At the beginning, it was a messed up character study. But the language I used to describe the tone was super-stylized and heightened and intense and twisted. There’s not a lot of horror-film stuff here: not a lot of jump scares. Some of the production design and colour palettes and lighting are very Rosemary’s Baby, but some of it is more like the chamber piece-y Bergman films. It’s taking these quite intimate psychological stories and telling them in a heightened, intense, cinematic way.

Did you find yourself thinking more about your own relationship to religion and faith while filming?

Not while writing it, but Christianity was always around when I was growing up. I went to an all-girls convent school when I was little, and my Dad’s dad was a vicar. It was never crammed down my throat, but I also never engaged with it. So I didn’t want to tell a story about someone’s religious upbringing. I’m trying to get an audience, most of whom are not religious, to connect with this character, who is having a concrete and not-disembodied relationship with God. We see her writing in ecstasy. Even if you don’t have faith, the sense of connecting with the universe and rising above our confusing, depressing everyday is a natural human urge. Whatever Maud is feeling – she thinks it’s God, but I don’t know if I’d call it the same thing – she is tapping into something. 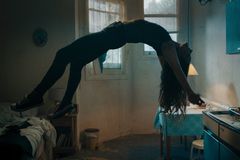