It is a cautionary tale that parents might whisper to their fame-craving children to keep them from the spotlight, this story of Emily Hampshire and the rat. It wasn’t the rat’s fault, of course. It wasn’t Hampshire’s fault, either. They were two dedicated professionals set on a collision course by fate. Well, set on a collision course by the creators of 12 Monkeys, the Syfy series in which Hampshire stars as the enigmatic, eccentric truth-teller Jennifer Goines.

The trouble started with an e-mail to Hampshire from an assistant director: “How do you feel about spiders?” The actor hates spiders. However, being a good Canadian and, thus, a good sport, she said she was okay with scorpions and rats. So a scorpion and a rat were brought on set for a scene in which Jennifer is being tormented with the creatures. There was Hampshire, mouth open in a maniacal laugh under a dangling rat, when… well, I should let her finish the story.

“The rat pooped in my mouth,” Hampshire says. And then she repeats it slowly: “The rat. Pooped. In my mouth.” She pauses for a minute for effect, then bursts into raucous laughter. “The rat wrangler came over and said, ’I’m so sorry. He was nervous. It was his first show.’”

The unfortunate episode with the rodent hasn’t deterred Hampshire at all from her vocation, which she has been dedicated to since the age of 13, and which is the only job she’s ever had. It’s not like she’s had any time lately to consider an alternative. She will soon be seen in Xavier Dolan’s film The Death and Life of John F. Donovan, and in the suspense thriller Never Saw it Coming, an adaptation of Linwood Barclay’s 2013 novel. The fourth and final season of 12 Monkeys will begin airing this summer. It’s an enviable list of credits for someone who was ready to throw in the towel just a few years ago, before Eugene and Dan Levy cast her as the laconic and hilarious motel receptionist Stevie Budd in their comedy phenomenon Schitt’s Creek.

Watching Hampshire’s animated gestures as she discusses her big career break over Earl Grey tea at Soho House in Toronto, it’s hard to believe that this lively person was, until fairly recently A) afraid of auditioning and B) on the verge of packing it in. She’d had two decades of steady, small-scale success in Canadian film and television, but hit a turbulent patch.

“I was in a bad place in my life,” she says. “I hadn’t worked in a year, I was getting a divorce, I was getting nervous in auditions.” In fact, she was down to $800 in the bank, and was preparing to move into her friend’s closet in L.A.: “I mean, it was a walk-in closet,” she says, smiling wryly. “And I’m a denning animal, so I like closets.” That’s when she got the casting call for a show about a snooty family that goes bankrupt and is forced to live in a small-town motel.

She worked up the courage to audition for CBC’s Schitt’s Creek, although Dan Levy would later tell her that she prefaced her appearance with, “This is going to be horrible,” and hid her face in her shirt. The creators saw through the nervousness, and Hampshire won the part of Stevie. “It feels like a rebirth,” she says of the series, which now counts musician Elton John, comedian Sandra Bernhard and designer and filmmaker Tom Ford as fans. Shortly afterward, she was cast in 12 Monkeys. Between those roles and parts in films like Darren Aronofsky’s Mother!, Hampshire hasn’t had any time off in the past four years. She splits her time between Toronto, where she shoots Schitt’s Creek, and Los Angeles, where 12 Monkeys was filmed.

“Emily is beyond dedicated,” says Terry Matalas, executive producer of 12 Monkeys. “She has that unique ability to play so many things at once – manic, angry, vulnerable, funny, homicidal, loving. To be able to quickly pivot from one emotion to the next at breakneck speed is what makes [the character] Jennifer work. And that’s all Emily.”

Jennifer and Stevie reflect two aspects of Hampshire’s personality. Stevie is the sarcastic, chill person she wishes she could be – so different from her own ebullient spirit that she feels she disappoints people meeting her for the first time who are expecting a sly, cool girl. But it is Jennifer, the manic, freethinking key to 12 Monkeys’ riddle, who is closest to her heart.

In my own life, I’ve gotten more confident with saying things that are true.

“It’s liberating to play someone like that. I sometimes fantasize about being an old lady, when you can say the truth that everyone else is thinking and no one is saying,” she says. “In my own life, I’ve gotten more confident with saying things that are true.” Eloquently illustrating this fact, she talks openly about the huge change that’s happened in the film and TV industry over the past several months. “Before the whole MeToo thing happened, going to a general meeting [in Hollywood] felt like dating. Because there’s no specific project you’re discussing, it felt like you had to be likeable,” she says. “Right after it happened, it was like night and day. I wasn’t sexually assaulted before, but it was just the vibe in the room changed. It was much more professional.”

With this sleazy side of the industry, it’s understandable that parents might dread sending their kids off to be actors. Hampshire, who grew up in Montreal, found her parents supportive of her aspirations. When the actor was in Grade 6, her mother took her to see Les Misérables on stage when she really wanted to go to a pool party hosted by a boy she was crushing on. It was a pivotal moment: The boy was forgotten, but Les Mis stayed. While she watched it unfold on stage, Hampshire says, “I felt like I left the Earth.” She wanted to be Eponine, one of the story’s protagonists.

Four years later, having made her debut as Geneviève Bujold’s daughter in the film Dead Innocent, Hampshire moved to Toronto at the age of 16. It was the place to make her mark as an actor. When asked if that decision pleased her parents, she laughs. “They knew they couldn’t have stopped me,” says Hampshire, who is pretty sure she didn’t graduate from high school.

While making the film Good Neighbours with director Jacob Tierney, she met and befriended a young Quebecois actor. The actor said he had nowhere to stay and Hampshire invited him to crash with her for the weekend. The kid, whose name was Xavier Dolan, stayed for a month.

As Dolan’s directing career rose into the stratosphere, he kept telling Hampshire that he was writing a part for her. When she was on set playing other roles, they would connect on FaceTime and he would read new pages he’d written. All the while, big-name stars were joining the cast of Dolan’s film, called The Death and Life of John F. Donovan, which gave Hampshire the jitters. “Suddenly, Jessica Chastain is in it ... Kathy Bates, Natalie Portman. A lot of people wanted a star in my part, but Xavier was like, ‘No, it’s Emily.’’’

When asked why he wanted Hampshire so badly for the part, Dolan highlights her sense of humour. “I think, as director, you have to surround yourself with people who can laugh at you and laugh at themselves,” he says. “She’s dedicated to the part she plays but she has that very rare quality of introspection that allows her to never take herself seriously, even though she takes her job, and her character, seriously nonetheless. That, for me, is very precious.”

“I wanted to be great for him,” says Hampshire. “I wouldn’t have wanted him to stick by me and then I ruin it. But it was the greatest working experience of my life. It felt magical.” For a person who was ready to give it all up, it doesn’t really get much better than Emily Hampshire’s CV in 2018. “I feel like I’ve hit the jackpot.” 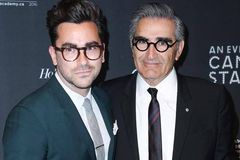 The success of Schitt’s Creek marks a turning point for the CBC
January 9, 2017 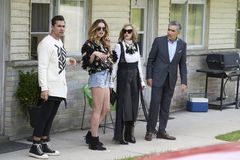 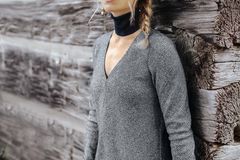