If the Internet could have a pandemic-era boyfriend, it would be Stanley Tucci.

For the past tremendously terrible year, the character actor previously best-known for movies both indie (Big Night) and blockbuster (the man is responsible for turning Chris Evans into gosh-dang Captain America, people!) has become something of a one-man meme factory-slash-charm offensive.

There he is on your Instagram feed, teaching you how to make the perfect Negroni (“use good sweet vermouth”). There he is on Facebook, promoting his upcoming CNN travel series Stanley Tucci: Searching for Italy. And later this fall, he’ll be all over your Amazon queue when he releases his memoir Taste: My Life Through Food, which also seems like an instruction book on how to achieve his unique level of effortlessly cool bon vivant-ness.

But don’t worry: Stanley Tucci is still a pretty fine actor, too.

Take his new film Supernova, in which he plays a novelist suffering from early-onset dementia. One more “but don’t worry” caveat: Supernova isn’t some feature-length dirge. The film, from British writer-director Harry Macqueen, is more a heart-bursting celebration of one couple’s last big, loving adventure across England’s Lake District. And the other half of that couple? He’s played by Colin Firth, Tucci’s real-life best friend of more than two decades.

The pair met back on the set of 2001′s Conspiracy, a Second World War drama about the Nazis’ plan for “the Final Solution” – a rather dark production from which to form a friendship. But the two connected in a way that differed from so many relationships that form on-set and then immediately dissolve.

“A lot of people you become so intimate with for a short period of time, and then in the end you realize you don’t have that sort of core connection,” Tucci says the other week during a Zoom interview. “But there are many people you do work with and form this deep connection. You share an aesthetic, an experience. [Colin and I] have been through a lot of difficult times personally and have always been there for each other.”

While the friends collaborated on 2012′s vaguely remembered heist comedy Gambit (Firth starring, with Tucci in a supporting role), the two were never able to operate on the same footing until the script for Supernova came Tucci’s way.

“I’d regularly ask Colin to do movies, and he always turned me down,” Tucci says with a half-laugh. “But as soon as I read Harry’s script, I thought it should be offered to Colin, too. And when you’re working with somebody you know intimately for an extended period of time, and when you’re playing characters going through all this emotional stuff on-screen, our friendship only made it deeper. I respect Colin and admire him more than I ever have.”

Aside from being an opportunity to mirror a real-life friendship, Supernova is also part of an overdue movement of filmmakers telling same-sex narratives in which the sexuality is rather incidental. Tucci and Firth’s characters are simply a committed, loving couple caring for and quarrelling with each other, and no one on-screen makes much of a deal about it. Yet the fact that this story is told by a straight filmmaker and starring two straight performers does bring up the question of representation, and responsibility.

“We talked about it quite a bit. Is it appropriate? There was a concern, but we all felt that Colin and I had played gay characters before and were well-received by the gay community, as this film has been,” says Tucci. “Our job is to simply tell the truth in our performances, to not play into tropes or to exaggerate. To malign. To make fun of. To send up. It’s just about telling the truth.”

Still, Tucci, who might be best remembered (at least in rom-com circles) for his role as the gay art director Nigel in The Devil Wears Prada, admits that the question of which performers are afforded the opportunity to play which parts is a complicated one.

“Nowadays, I think that now actors who are gay are able to be openly gay, the playing field will start to level and then we don’t even have to ask the question any more of, ‘Is he gay? Is she gay?’ It is just an actor playing a role,” he says. “I do completely understand the dilemma. But I feel very fortunate that the gay community has been positive about Colin and I playing gay characters over and over again.”

And maybe, if the internet demands it, the two will also co-star in a new Instagram cocktail lesson. We all deserve it. 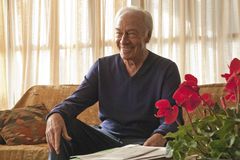 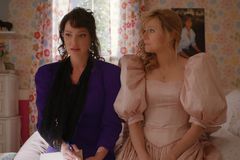 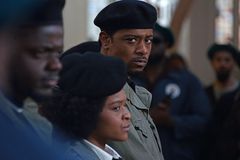