Politics and performance were the twin passions that drove Canadian activist/actor Shirley Douglas. Pragmatic and strong-willed, with a long list of film, television and stage credits to her name, she inherited a profound commitment to philanthropy from her father, Tommy Douglas, premier of Saskatchewan for 17 years, and the first NDP member of Parliament. Known as the Father of Medicare, he successfully battled to establish universal health care for Canadians.

Fighting for causes came as naturally to Ms. Douglas as acting, even when her activism resulted in her running afoul of the U.S. government and landing in jail. On the large screen she worked with iconic director Stanley Kubrick in 1962’s Lolita. Much later in her career she appeared with actor Jeremy Irons in the David Cronenberg movie Dead Ringers (1988). Ms. Douglas became widely recognizable in Canada as the stern matriarch, May Bailey, in the popular CBC television series Wind at My Back (1996-2001). One of her favourite screen performances was as Hagar Shipley, the main character in a film adaptation of Margaret Laurence’s novel The Stone Angel. The made-for-TV movie Shadow Lake earned Ms. Douglas a 2000 Gemini Award.

Although she took part in many stage productions during her 65-year career, only once did she act alongside her famous son Kiefer Sutherland. In the 1990s, as Mr. Sutherland’s star glittered in Hollywood, she persuaded him to join her in a Tennessee Williams play, The Glass Menagerie, a 1997 production that ran at the Royal Alexandra Theatre in Toronto, and at the National Arts Centre in Ottawa. It was a rare opportunity for the duo to shine together. At the core of the drama, a mother and son deal with their troubled relationship.

“Offstage, I saw a proud mother and a devoted son with great chemistry, laughing and loving the time they’d carved out for one another,“ said Kathy Greenwood, a central member of the cast. Michael Oscars, Ms. Douglas’s long-time agent, said “It was Shirley’s idea to do the play. She asked me to sell it to producers so I approached the Mirvishes. It was game on.”

For both her acting and her activism, Ms. Douglas was invested as an officer of the Order of Canada in 2003. Other awards included a star on Canada’s Walk of Fame and the Queen Elizabeth II Diamond Jubilee Medal. Ms. Douglas died of complications from pneumonia on April 5 in Toronto. Mr. Sutherland said on Twitter that her death was not related to COVID-19. Her health had been compromised for some time. She was 86.

Prime Minister Justin Trudeau offered his condolences via Twitter: “Shirley Douglas was a tremendous talent, a tireless advocate, and a fearless activist who never stopped fighting for what she believed in. Her passing is a true loss for our country.”

When she wasn’t acting, Ms. Douglas poured her energy into working for social justice. Michael McBane, retired national co-ordinator for the Canadian Coalition of Health Care expressed admiration for her: “During a doctor’s strike in Saskatchewan to oppose Medicare [1962], Shirley was right there, alongside her father, getting doctors flown in from Britain,” he said. “She was a fighter because she knew that if we ever lost public health care we’d never get it back.”

Ms. Douglas became a high-profile spokeswoman for the coalition, railing against anything that smacked of privatization and for-profit health care. Just as her father influenced her politics, she, in turn, influenced her son Kiefer, taking him to a rally when he was just six years old. When she asked him to join her as a spokesperson for the health care coalition he readily agreed. “No matter how busy he was he’d always respond to a call for help,” Mr. McBane said. “He’d do anything for us because he’d do anything for his mother.”

Mr. Sutherland and his twin sister, Rachel, born in England in 1966, were the product of a seven-year marriage to Donald Sutherland, a relationship frequently characterized in the press as “stormy.” “Aren’t all marriages stormy?” Ms. Douglas once responded to Globe writer Carole Corbeil. “I’ve discovered that marriage is not one of those things I do well. I’m not at all successful at it.”

A first marriage in 1957 to Timothy Emil Sicks, heir to a Prairie brewing company, ended after the birth of her first son, Thomas. She described her experience of motherhood to Ms. Corbeil as “Getting lost in the world of baby purées.” She added, “It’s amazing what you learn about yourself when you’re constricted. You become totally inventive.” Part of that inventiveness included her making a living by dubbing spaghetti westerns into English.

Once her children became old enough, Ms. Douglas resumed her acting career and was frequently away from home. In an interview with The Canadian Press she justified absences from her family saying: “You either have to decide you’re going to be guilty about it and not do it, or that you’re going to do it and that you will be, in the end – and I hate to use it as an excuse – a better mother than being at home and bitter that you’re not allowed out.”

Being out, engaged by work and the world of politics, kept Ms. Douglas energized, particularly during the 10 years she spent in Hollywood during the civil rights movement. She marched for civil rights and against the Vietnam War. She befriended singer Harry Belafonte and several members of the Black Panthers, a revolutionary “Black Power” group formed to fight for the rights of African-Americans and challenge police authority. As one of the founders of Friends of the Black Panthers, a fundraising organization, Ms. Douglas helped provide breakfast for disadvantaged children.

The FBI accused Ms. Douglas of attempting to buy hand grenades for the Black Panthers and arrested her. She knew she had been framed. She spent five days in jail proclaiming her innocence before she was exonerated in court. Her father, at that time leader of the federal NDP, flew to her support. He stated he was proud of her.

“My daughter believes, as I do, that hungry children should be fed, whether they are Black Panthers or white Republicans.” In spite of charges being dropped against her, the U.S government denied her a work permit, forcing her to leave the country.

By then divorced from Mr. Sutherland, she returned to Canada in 1977 with her three children in tow. Undaunted by the traumatic experience, she continued her activism unabated. She participated in ban-the-bomb marches, co-founded the first Canadian chapter of Performing Artists for Nuclear Disarmament and lobbied, through ACTRA, for labour rules to protect child actors.

During an interview with writer Sarah Hampson, Ms. Douglas said, “It’s in my genetic map to know that if you can get three people together in a room who agree on certain principles, then those three get three more friends and so on until you have a movement.” Ms. Douglas learned such strategies early in life.

Born on April 2, 1934, in Weyburn, Sask., Shirley Jean Douglas was the elder of two daughters belonging to Tommy Douglas and his wife Irma (née Dempsey). Shirley’s charismatic father took her with him as he campaigned in small towns across the prairies. Mr. Douglas’s passionate commitment to free medical care came about as the result of a childhood bone ailment that required three years of intermittent hospitalization. A surgeon, doing charity work in Winnipeg, treated him without cost. For his parents, working-class immigrants from Scotland, the alternative would have been the amputation of their son’s leg.

The generosity of the surgeon who saved his leg stayed with the boy, who grew up to become a Baptist minister before entering politics. He believed in helping others and passed this on to his daughter Shirley. “When I went to school, if someone didn’t have mittens, I would go home to get some. It wasn’t charity. That wasn’t a word I ever heard,” Ms. Douglas said. “Father was trying to build a society in which people would have a feeling of responsibility for each other.”

The family moved to Regina where 16-year-old Shirley took her first acting job at Regina’s Little Theatre. Her performance won the Dominion Drama Festival’s best actress award. It was encouragement enough for her to proceed with training, first at the Banff School of Fine Arts then at the prestigious Royal Academy of Dramatic Art in London. She graduated in 1952, working in several British television and stage roles before moving to Los Angeles, then finally back to Canada, where she lived for the rest of her years in Toronto.

"She was definitely a leader,” her agent, Mr. Oscars, said. “When you fell within her circle you followed her. She always managed to make you feel much better than you were.” 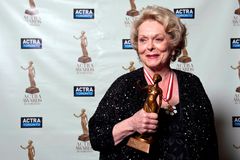 Canada AM: Bill C-36 - PEN President Reza Baraheni and actress Shirley Douglas discuss the possible impact of Bill C-36 for Canadian artists.
November 20, 2001
Follow us on Twitter @globearts Opens in a new window
Report an error Editorial code of conduct
Due to technical reasons, we have temporarily removed commenting from our articles. We hope to have this fixed soon. Thank you for your patience. If you are looking to give feedback on our new site, please send it along to feedback@globeandmail.com. If you want to write a letter to the editor, please forward to letters@globeandmail.com.
Comments