The summer of 2002 was a summer of firsts for me. I graduated high school. I got a job. By September, I moved out of my parents’ place for university. But in between, I ran screaming out of my basement. I checked the backseat of my car for ghosts every night I drove during that foggy summer in the suburbs of Toronto. I was scared witless. I also watched Ringu, a Japanese horror movie about a cursed videotape. That night is long past, but the terror of the demon child Sadako, and the friendships – and nightmares – she helped cement, will live on forever.

Two decades later, the 1998 movie Ringu has been seared into the minds of modern horror fans as one of the best ghost stories ever filmed. So the story goes: A rumour among Japanese schoolchildren is there’s a strange tape; after watching it, the phone rings and a voice warns you will die in seven days. When a journalist’s niece dies after viewing a copy, she begins investigating the legend of … Sadako. (Even typing that name still brings shivers.) You never forget her image: a girl in a water-drenched white dress, barefoot with nailless and bloodied fingers, lurching supernaturally toward the camera, her head of long, wet, stringy hair bowed downward until – ahhhhh! – her victim’s mouth-warping final moments.

Ringu begot The Ring, a U.S. adaptation from October, 2002, that sparked the Western boom of Asian-inflected psychological horror. Today, the aesthetic is shorthand for the best of the genre: foreboding soundtracks, slow-burn reveals and careful mythology building. A trend that began as English remakes such as The Grudge (about a vengeful ghost family) and Dark Water (about a vengeful ghost child) became full-blown Hollywood franchises, such as James Wan’s Conjuring Universe (a vengeful demon doll and demon nun, among other monstrosities).

In the summer of 2002, a little-known foreign film about a vengeful Japanese demon girl banished to a well wasn’t sitting on the shelf at Jumbo Video. In our last months together before university beckoned, a group of friends was determined to watch Ringu. We eventually found a pirated VHS for rent at a Chinese video store. It was understood a bootleg wouldn’t be very good quality. But wouldn’t it be so cool to see before the remake came out?

Watching it was the most disconcerting movie experience of my life. The tape’s quality was awful; only Sadako knows how many times it had been dubbed over. That’s not to mention its suspicious look – plain black, save for a title sticker scrawled in Chinese. The subtitles were not just poorly translated – are those moaning voices saying “frolic in brine, goblins be thine?” – but reduced to washed out runes that left us guessing at the story. It turns out Sadako transcends fluent language, because what we could make out through the analog fuzz was terrifying.

Picture this (or don’t, please): naive teens, sitting in a dark basement, watching doomed characters watch a cursed tape of creepy, grainy images of the undead, all dubiously dubbed onto a creepy, grainy tape of unknown Asian provenance. We absorbed the crux of the Sadako curse – that it’s passed on by making copies. And we had watched this copy. Which means – ahhhhh! – we freaked.

We ejected the tape and stared. Nope, nope, no one would even touch it. Matt, who rented it, tried imploring someone else to return it. Take that cursed thing? Into my home? Sorry, Matt, you return your own ghost tape. (He ended up doing the deed under considerable duress.)

Spoiler alert: We’re still alive. But the damage was done – that very night, in fact, as I gave Jason a lift home through the fog. You couldn’t see more than a few feet in front of the car. Then Jason casually advised: “You should make sure Sadako isn’t in your back seat.” It was a joke, but I was shook. How could you really know what was back there, in the dark, under the seat? My driving instructor would have been proud of the number of rear-view mirror checks I did that summer.

I dreaded going into my own basement, where my family kept the desktop computer. My parents were incredulous when once I turned on all the lights in the house and blared music at 2 a.m. – they would never understand the lengths you should go to keep the shadows at bay. The apex: One night when a high-pitched screech suddenly pierced the basement air – ahhhhh! – I was sure Sadako was here. I launched myself up the stairs, screaming at the top of my lungs. What’s wrong, my concerned parents asked? It was just the fire alarm, its low-battery alert choosing a very inappropriate summer to come alive.

There were jokes, too, attempts at taking away her strange power. We discovered Matt’s incredible susceptibility to jump scares, sparking years of quietly creeping up on him until – ahhhhh! – it’s Sadako. Francis’s aging minivan developed a strange bumping sound in one wheel well – ahhhhh! – it’s Sadako. And have you ever tried to do Sadako’s iconic reverse-kabuki monster walk in real life? It’s – haha! – Sadako, as still hilariously imitated by me and my friends well into adulthood.

Today, Sadako is a bit of a pop-culture joke. She’s thrown out the first pitch at a Japanese baseball game. She’s battled other monsters in questionable horror mashups. She got old: On a recent rewatch, the scares were intact, but their 1990s analog vintage did not age well after years of filmmakers wielding better technology and makeup to outdo the spirit who started it all. There is even a new Japanese sequel, Sadako, that has been nearly universally panned by critics so far. Time has passed her by.

Among friends, she’s remained timeless. Our lives have diverged since that summer, between work, family and the rest of life that doesn’t spare much time to be scared witless. When it does, there she is, as we recount our favourite Sadako stories over coffees or holiday reunions.

There’s been a late addition to our personal legend of Sadako. Recently a friend bought a house in Toronto. As she was cleaning out the random debris left behind by the previous owner, she happened upon something under the stairs: a tape, plain black, save for a title sticker scrawled in Chinese. What was on it? Are you crazy – would you watch it? After a few dares, it was decidedly thrown out, unseen. The curse of responsible adulthood proved stronger than – ahhhhh! – Sadako.

Next week: Domini Clark is here to kick butt and chew gum with 2017′s Atomic Blonde – and she’s all out of gum

Summers at the Cinema: How Jurassic Park, and its door-opening raptors, was a gateway drug to lifelong cinematic obsession Subscriber content
August 6, 2019 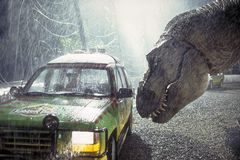 Summers at the Cinema: There may be no crying in baseball, but that doesn’t hold for A League of Their Own
August 1, 2019 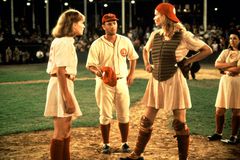 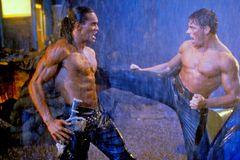