So much of the past 12 months was taken up by a fundamental question that was alternately maddening and enlightening: What, exactly, is cinema? Martin Scorsese, the Marvel Cinematic Universe and Netflix were the argument’s main connective threads, but the conversation trickled down in an ultimately rewarding way: Any amount of time spent talking about movies is time well spent.

And there was a lot to talk about this year, too – at least in Toronto, where 795 films were released theatrically (a record, according to the Toronto Film Critics Association). I managed to see 203 of them, and narrowing a list down to the Top 10 aged me, Irishman-style. But enough preface: Here are the 10 (or so) films that I could not stop thinking about this year.

An exhilarating and furious indictment of class struggle, Parasite is the masterpiece that South Korea’s Bong Joon-ho has been working toward his entire career. Mixing the social outrage of Snowpiercer, the wild humour of Okja, the heartwarming family drama of The Host and the slow-boil vengeance of Mother, Bong’s latest is a genre-hopping triumph. Focusing on two families – one a clan of con artists living in a cramped basement apartment, the other led by a tech mogul who keeps his wife and two children safely ensconced in a star architect’s mansion – Parasite expertly plays with tension and expectations. At first, it appears that Bong has created a sharp comedy, especially when he digs into the details of how one family becomes so familiar with the other. But then both families’ lives become upended in the most peculiar of ways, leading to a final hour that is sharp enough to draw blood.

A 134-minute anxiety attack disguised as a movie, Benny and Josh Safdie’s Uncut Gems is a New York trash-terpiece. Abiding by his self-imposed rule that every fifth movie he makes is allowed to be good, Adam Sandler stars as Howard Ratner, a permanently stressed-out Manhattan jeweller. As the film opens, Howard is in deep debt to the Jewish mob, on the outs with both his wife and mistress, negotiating with real-life rappers and NBA stars, and hustling for one last score. The Safdie brothers start big and fast and dirty and do not stop to take a breath for one single filthy moment. The result is a Vice Magazine-circa-2012 article come to life, and I mean that as the highest possible compliment.

Partly a continuation of the career-long conversation that he’s been having with audiences about the evil that men do and partly a reflection on regret, The Irishman is the film that Martin Scorsese needed to make. And it is the film that the industry and audiences needed to spend so much of the year wringing its hands over. Much like the director’s most popular work, this is a crime film, thrilling and visceral. But The Irishman represents something deeper, too. It’s as much a companion piece to the addictive violence of Goodfellas and Casino as it is to the meditative lacerations of Silence, the punishing doubts of The Last Temptation of Christ and the romantic suffering of The Age of Innocence. The result is a film that is nearly perfect.

4. Portrait of a Lady on Fire

Including Céline Sciamma’s drama in a 2019 list is a slight cheat: The film will only screen on a handful of New York and L.A. screens this month before it gets a proper release in February, 2020. But the film – passionate, elegant and devastatingly romantic – is such a triumph that it can sustain at least 24 months of cultural conversation. In 18th-century Brittany, France, artist Marianne (Noémie Merlant) is commissioned to paint the portrait of an Italian noblewoman’s reclusive daughter, Héloïse (Adèle Haenel, from Sciamma’s Water Lilies). Soon enough, the pair disarm each other and form a bond intimate and profound. Sharply subverting the male gaze at every turn, Sciamma has created an unforgettable treatise on thwarted desire.

Early on in her excellent new drama The Souvenir, director Joanna Hogg aligns her film with its most despicable character. “We don’t want to see life play out as it is,” says Anthony (Tom Burke), a Cambridge-educated, silver-tongued mooch, “we want to see it as experienced within this soft machine.” That Anthony is using his words to woo film student Julie (Honor Swinton Byrne), who herself is based on Hogg, only adds to The Souvenir’s paradoxical approach to filmmaking as personal history. This is not a movie that lets life simply play out as it is or was – it is instead a collection of memories, some sharp as shards but others smoothed down. It is, as Anthony says, an experience that cannot be replicated in another medium.

If there is a trend forming in this list, it’s the dominance of Netflix (40 per cent). Part of the streaming giant’s success is due to its deep pockets, leveraged by huge amounts of debt. But another reason is its commitment to producing movies that other studios have forgotten about: human dramas that place character before franchise potential. Marriage Story is the just that kind of film, wisely leveraging the star power of Adam Driver and Scarlett Johansson to tell a story few in Hollywood would have financed today. By the time the film cycles through the starts and stops of a divorce, director Noah Baumbach will have you cycling through all manner of convulsions. This is hilarious, heartbreaking cinema – a work that will make you burst out laughing one moment and leave you tearing your hair out the next.

A sensual and heady stew of romance, family drama, police procedural, political polemic and ghost story, Atlantics marks the debut of a ferocious talent in French filmmaker Mati Diop. In Dakar, the young Ada (Mame Bineta Sane) longs to be with construction worker Souleiman (Ibrahima Traoré), but she has been promised to another, and he sees no future in Senegal. But after Souleiman leaves the country for some vaguely brighter prospects, tragedy strikes on the Atlantic Ocean. Diop takes some highly unusual detours, both narratively and thematically, but there is a confidence in her vision that is startling. The intense pleasure of Atlantics is not in the A-to-B storytelling, but in the poignant and painful emotions its filmmaking conjures. And in the realization that this is just the first scream of an intensely curious and essential cinematic voice.

Earlier this year, I predicted that there would be a rush of critical essays examining how a white director such as Joe Talbot could make a film called The Last Black Man in San Francisco. And deservedly so – just because a film takes issue with a city’s racial erasure does not mean it’s immune to that same discussion.

But the anticipated debate didn’t really arrive in a tidal-wave fashion. Perhaps because Talbot’s work was released too early in the year to grab full hold of the cultural conversation. Perhaps because studio A24 was more interested in pushing the dialogue toward another one of its films, the film-festival favourite Waves, which also tells a story of black lives from the directorial vision of a white filmmaker. Whatever the case, The Last Black Man in San Francisco is an essential work to experience and a difficult one to shake. With its deadpan humour, wild visuals and career-making performance from Jimmie Fails, who collaborated with Talbot on the screenplay, the film marks an irrepressibly original and exciting cinematic vision – one that feels as fresh as it does problematic.

Using director Lulu Wang’s own family history – “based on an actual lie,” as the opening credits inform – The Farewell tells a big drama that carefully gets whittled to a hundred tiny little dramas, each affecting in their own way. The film opens in Changchun, China, where family matriarch Nai Nai (Shuzhen Zhao) is awaiting test results at a local hospital. Unbeknownst to her, the elderly woman has cancer and is likely to die in a few months. But in an effort to avoid upsetting Nai Nai, her sister Little Nai Nai (Lu Hong) hides the diagnosis – a strategy that the film repeatedly informs us is common practice in China – and the rest of her globally scattered brood make their way back to Changchun for one last visit. Wang’s eye for small-yet-large details is amplified tenfold by the performances she wrings out of her cast, including a stellar lead turn by Awkwafina.

Leave it to Claire Denis and James Gray to find something new to say while in outer space. While Denis’ High Life and Gray’s Ad Astra both flick at the zero-gravity trappings of the genre – and feature marquee-level stars in Robert Pattinson and Brad Pitt, respectively – each film works against expectations, resulting in two of the year’s most profound – and divisive – works. Don’t let either film get lost, in space or otherwise.

Film Review
Peter Strickland’s In Fabric is so much more than a movie about a haunted dress, though it’s about that, too
Subscriber content
December 5, 2019 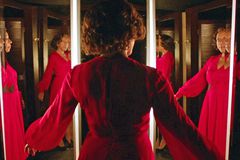 Film Review
Cartoonish and treacly, The Kindness of Strangers is an international effort in awfulness
Subscriber content
December 5, 2019 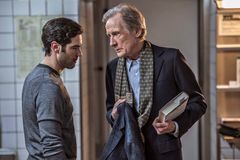 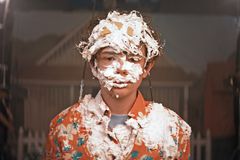