Nisha Ganatra is a veteran at taking the highs with the lows. Last year, the Vancouver-born director saw her indie film Late Night scooped up in a record US$13-million deal by Amazon Studios … only to then witness a storm of scolding industry headlines when the comedy didn’t soar at the box office. Flash-forward a year to this spring and Ganatra was set to release The High Note, her first big and splashy studio-backed rom-com … only to then see COVID-19 shutter multiplexes and Focus Features send the movie to video-on-demand.

Ahead of The High Note’s digital release this Friday, the 45-year-old Ganatra spoke with The Globe and Mail’s Barry Hertz about career ambitions, the brave new world of film releasing, and whether or not she considers herself a Canadian filmmaker.

Review: The High Note is the smooth, charming and chart-topping rom-com we need right now

You grew up in Vancouver, but your film education starts at UCLA and continues through to NYU. Do you consider yourself a Canadian filmmaker, whatever that might mean?

You know what, I don’t really, because the Canadian film scene is so specific. I feel that there are such strong Canadian auteurs and I consider myself an American filmmaker because that’s where I’ve been working. But I do consider myself Canadian at the same time, if that makes sense. Although it feels like I’m still stuck in the early 2000s when thinking of Canadian filmmakers, and have the sense of, “You’re not one of them.” Because I’m not Atom Egoyan or Patricia Rozema or I didn’t make [Gary Burns’s] Way Downtown.

Well, you got the name-checks in there, so that places you in the Canadian Filmmaker Hall of Fame.

I did miss Jeremy Podeswa and Don McKellar, though!

Your past two films have a similar narrative to them: stories about young women in the entertainment industry, who find themselves getting close to an industry veteran. Can I take it that you’ve had similar experience?

I don’t think that I have – other than desperately wanting that experience, wanting those kind of mentors. It’s similar to Late Night in that I was blindsided into this industry and everyone was just, “What the hell are you doing here?” But the thing that I do relate to in both those movies is being a fan of somebody who starts off watching them and dreaming about them and then, through the magic of our industry, finding out that if you work hard enough you can get to be in the sphere of the artist you admire. I relate to that feeling of being an outsider, desperately wanting to be in an industry that gives zero signs of wanting you.

So you encountered the same kind of resistance that’s on display in both films – stories about women who are being told by society and their industries that they should play it safe and be thankful for what they have.

It was definitely challenging getting [my debut Chutney Popcorn] distributed, but I think every indie filmmaker has that hurdle. But what I do love about both movies is that they look at how the industry is telling older women that they’re irrelevant because of ageism, and that the young women are being ignored because of sexism. So in both films the women have to take big risks, and become each other’s biggest allies.

You started in indie film, but now you’re switching easily between major-studio projects and episodic television. How do you approach a feature versus approaching a film?

Television has that instant gratification. You get in there, prep for five days, shoot for five days, and it’s on the air a few weeks later. It keeps you sharp. It takes one to two years of your life to make a movie – you have to be really sure that it’s worth that much time and dedication. With television you can take more risks and roll the dice, and you can afford to say, “Wow, that was not worth the time. But it’s over now.”

Your television work is also notable for how diverse the projects are: Fresh off the Boat, Dear White People, Black Monday. Are these diverse-forward projects a conscious part of your career path?

I'm just most interested in telling stories that haven't been told before. That's my training from NYU film school: "Don't add to the crap that's already out there. Do something new or don't do anything at all."

Initial reaction to Late Night was rather hostile, in terms of the industry press, with a lot of headlines focusing on how much money Amazon spent to acquire it and how little it grossed at the box office. Do you pay much attention to that side of things?

I am really bad at that part, and I'm trying to get better because I heard that Steven Spielberg is really good at it. It wasn't something that I considered part of my job or interest, but I'm trying to care more about.

Now for the question that I’m sure you’re sick of answering already: What is it like to release a film during a pandemic? The High Note is the first non-kids movie to be skipping theatres in favour of premium-priced video-on-demand.

It is weird to be a guinea pig of the live-action movie. And it’s a little heartbreaking because you make this movie and pick these anamorphic lenses and do this surround-sound work and then, oh no, are people going to just watch this on their iPads? The responsible thing to do is not release the movie in theatres and let people discover it at home. But it’s such a bummer, too, because I was so looking forward for my Notting Hill experience on movie junkets and driving around town to see it playing on multiplexes. I usually do indie films, which means they go to small art-house theatres. It’s a little bummer to not be able to experience that, but hopefully I will again.

The High Note is available digitally on-demand starting May 29

Film Review
The High Note is the smooth, charming and chart-topping rom-com we need right now
Subscriber content
May 29, 2020 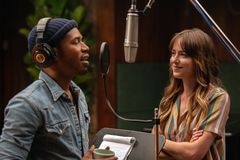