On a recent Friday in New York, David Lowenherz set out for an evening at the movies with his wife and some friends whom he hoped would, as he said in an e-mail, “do everything in their power to keep me from throwing popcorn at the screen.” Their choice of entertainment was Can You Ever Forgive Me?, a critically acclaimed drama starring Melissa McCarthy about a literary forger named Lee Israel, and it was clear that Lowenherz, a rare-autographs and manuscript dealer who had helped the FBI ensnare the real Lee Israel in the early 1990s, had not forgiven her.

Born in 1939 in Brooklyn, Israel was once an acclaimed biographer of actress Tallulah Bankhead and journalist Dorothy Kilgallen, but she fell on hard times in the mid-1980s after writing an inferior book about Estée Lauder that was rushed out to compete with one by the cosmetics queen herself. Misanthropic and alcoholic, Israel was ill-suited to an office job that might have provided a steady income; she began bumping on and off welfare.

But, in 1991, Israel was in the New York Public Library rummaging through the archives of the radio soap-opera creator Elaine Carrington, trying to work up a freelance piece for Soap Opera Digest, when she stumbled upon a box of letters written to Carrington by the vaudevillian Fanny Brice. Security was lax: Israel slipped three of the Brice notes into her shoe, then made her way across Central Park to an autograph dealer on the Upper East Side, where she nervously scored a US$120 payday. Counselled by the dealer that “better content” would fetch higher prices, Israel purchased an old manual typewriter that matched Brice’s font, went back to the library to snatch a few more letters, and jazzed them up with some cheeky postscripts below the signature.

Soon, she skipped the thefts and began executing entire forgeries, starting with a series of Louise Brooks missives based on a cache of the actress’s real letters she had seen but couldn’t steal. (Security, alas.) Gossipy faux correspondence from “Noel Coward,” “Edna Ferber,” “Marlene Dietrich” and others followed. Writing as the notorious lush Dorothy Parker, Israel issued the passive-aggressive plea for some made-up evening’s misbehaviour: “Can you ever forgive me?”

She was flush for a while, but when dealers grew suspicious – in one instance, her “Noel Coward” let slip some lascivious quips that the real Coward, living in an era when homosexuality was illegal, wouldn’t have dared put into a letter – Israel switched tacks and began stealing again. Lifting letters from libraries and university archives and replacing them with exquisitely wrought copies, she sent her friend Jack Hock into stores as her fence. All told, Israel churned out about 400 letters, until – spoiler alert – an FBI sting in July, 1992, ended it all.

In Can You Ever Forgive Me?, her fizzy 2008 account of her brief life of crime – newly reissued in paperback for the film’s release – Israel noted sardonically that Lowenherz, the dealer, was “one of the few in his field who I suspected knew that provenance wasn’t the capital of Rhode Island.”

In the spring of 1992, Lowenherz recalled the other day, he had bought an Ernest Hemingway letter but hadn’t yet taken it into the market because he had some doubts about its provenance. Calling some contacts, he learned the letter was actually supposed to be in the possession of Columbia University: Lowenherz brought it to the chief archivist, who realized his files in fact held one of Israel’s forgeries. Which is how it came to be that Lowenherz was wearing an FBI wire when Hock came into his store, Lion Heart Autographs – then on West 37th Street, just off of Fifth Avenue – peddling a purloined Edna St. Vincent Millay, a Jerome Kern and a Thomas Wolfe.

Israel and Hock were collared and charged with conspiracy to transport stolen property in interstate commerce; he was sentenced to three years’ probation; she received a sentence of six months’ house arrest and five years’ probation, and was ordered to pay restitution to the dealers she’d scammed. (She died in December, 2014.)

“She paid me $35 a month for maybe eight or 10 months, and that was that,” Lowenherz noted ruefully. “I lost thousands of dollars.”

He hadn’t yet seen the film, but he was dismayed that the memoirs upon which it was based – which he’d refused to dignify by reading – had been described as “a rollicking good time.”

“I don’t know if this is too strong a term, but she sort of raided and pillaged the archives of several universities and institutions in the United States,” he said. “This is no different, in my mind, than stealing a painting out of a museum. Insofar as one is concerned about the cultural heritage of a society – a literary archive: That’s not meant to be gone after.

“She’s not exactly my version of a folk hero. She certainly is no Robin Hood, stealing from the rich and giving to the poor. She stole from the libraries and filled her empty glass with bourbon.”

A few days later, after his night at the movies, Lowenherz seemed in a more reflective mood, if not yet a forgiving one. He revealed that a publicist he works with had suggested he write an op-ed to capitalize on the autograph trade’s moment in the spotlight; he was ambivalent about doing so. “I’m not going to grandstand. The film is probably a much more accurate portrayal of Lee Israel than she did herself. There’s nothing to be envious about what she did with her life.”

How did he feel about the fact that she was able to cash in on her crimes, with her memoir and the sale of the film rights?

“I don’t hold anything against her, that she wrote her memoir,” he replied. “I hold it against her that she thinks she was smarter than everybody else, and that what she did wasn’t so bad. What she did was awful. And that I am upset about. But I think she’d probably be pleased if she could see the movie now.”

Was he concerned that the film, as it expands across North America and the distributor gets behind an Oscar campaign for McCarthy, might put his industry in a bad light?

“We’re such a tiny bunch of people, anyway,” he said. Over the phone, he seemed to shrug. “It’ll just come up in a conversation if somebody calls me and they say, ‘Oh, by the way, did you see the film?’ And then I’m going to have to, like, go through the whole story again.”

Film Review
Review: Melissa McCarthy is a nasty real-life forger in Can You Ever Forgive Me?
Subscriber content
October 25, 2018 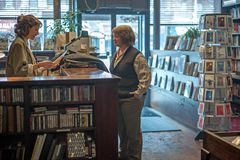