It says a lot about contemporary film culture that the movie most audiences associate with America’s shameful, nearly two-decade-long Guantanamo Bay saga might just be ... Harold & Kumar Escape from Guantanamo Bay.

Certainly, a number of well-regarded documentaries (Taxi to the Dark Side, The Road to Guantanamo) and indie films (The Report, Camp X-Ray) have attempted to underline just how large a stain the military prison has left on the country’s ostensible commitment to justice since it was established in 2002. But for one reason or another, there hasn’t yet been a film that has genuinely shifted public perception, despite the best efforts of Messrs. Harold and Kumar.

With The Mauritanian, director Kevin Macdonald and his stars Jodie Foster and Tahar Rahim aim to change that situation. Adapting the real-life struggle of Mohamedou Ould Salahi, who was imprisoned without charge at Gitmo following the 9/11 attacks, and his tenacious pro-bono lawyer Nancy Hollander, Macdonald’s new drama gives a human face to an astoundingly long-running tragedy.

Ahead of the film’s Canadian release this week, Foster and Rahim – who both earned Golden Globe nominations for their performances – spoke with The Globe and Mail about the trickiness of quote-unquote political films and honouring Salahi’s fight for freedom.

Did you both have the opportunity to read Mohamedou’s memoir, Guantanamo Diary, before filming?

Rahim I had never heard his story before I got the script, so when I read it, my feelings were very mixed up. I was happy to get this part offered, but at the same time I felt so bad and sorry and sad for what he went through.

Foster I became obsessed with it and went into a deep dive into [Guantanamo]. As an American, I knew almost nothing about it. Who the detainees were, whether they were still there.

I feel North Americans have a largely abstract concept of the prison. The fact that so many people were held without charge, for years. And that it still even exists. Was taking on this project a conscious choice to amplify the situation?

Foster The first impulse for me is always about the character and the text. I’ve never made a political movie before. I don’t really like them because most of the time they don’t honour character first, and to me that’s important. There are a few I love, like Salvador and some Costa-Gravas movies. But the strength of this film is that it’s a profile of an amazing man and his journey. That’s more important than the politics of it.

You both had the chance to meet the real people you were portraying. But is there any hesitancy in doing so? A worry that it might affect your performances?

Rahim I needed to meet Mohamedou because otherwise how could I be able to portray him? It was a joyful moment, even surprising, because it was hard for me to accept the idea that someone who has been through what he has could be so full of life and hope. Until, though, we started talking about the touchy things. I felt embarrassed. Like I was bringing him back to Guantanamo in a way, time-travelling. I felt bad and stupid, and I stopped.

Foster I felt inspired by him, too, as I did the real Nancy. Her goal has always been to serve Mohamedou’s story. To get the movie made, to close down Guantanamo. She’s not in this for herself.

Tahar, on those touchier subjects, how do you get yourself in the headspace to portray a man undergoing such isolation and suffering?

Rahim What struck me first is that Mohamedou doesn’t behave like a victim, so I never wanted to victimize him. I needed to convey his humanity to the audience. Whenever we see a character from this background, it’s as a terrorist or a violent man. It’s very rare to see a human being. But regarding the torture scenes, the only way I found to make it authentic was to get as close as possible to the real conditions. I wanted them to shackle me for real, to try waterboarding as far as I could, to put me in cold cells. It helps you touch a sort of truth.

Were there any concerns that you were putting yourself in real danger by doing so?

Rahim Movies are the art of fake, so I would go as far as I could. But I knew in my head that I would go back to my hotel room afterward. It was a whole different thing for Mohamedou. So I needed to go as far as possible into believing what I was doing. Kevin did start getting worried, but I said, “Trust me, I know what I’m doing.” I’m not going to put myself in total danger.

Your two characters only share a certain amount of screen time. What work do you do as performers outside of when the camera is rolling to cement that bond that Nancy and Mohamedou share?

Foster The relationship between actors is like having a little secret handshake. You know that you can trust each other. Here’s someone you’ve never met before, yet you share some of the most intimate moments of your life with them – sides to yourself that you might not ever show your parents or children or partner. I felt that bond with Tahar the second we were in the room together.

Rahim There are those kind of winks. It’s magical.

Foster It’s a weird thing, the movie business and the relationships you have with a cast and crew. I could be lying in a pool of fake blood, it’s four in the morning, and I’m drooling and crying and there’s also 150 people next to me, and someone says, “Oh, can you move your foot just so?” You have a real, intimate experience surrounded by strangers.

The Mauritanian opened in Saskatoon, Regina, Halifax, and Kingston, Ont., theatres Feb. 26; it will be available on-demand, including Apple TV/iTunes and the Google Play Store, starting March 2 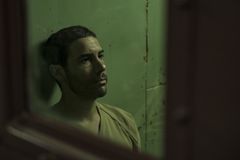