It was touch-and-go for a bit, but then a peeved librarian in New Brunswick tipped the balance and saved National Canadian Film Day.

After a boffo celebration in 2017, marked with screenings in 1,800 locations across Canada and abroad, organizers of the event that billed itself as “the world’s largest film festival” were ready to take a break.

“The 2017 sesquicentennial was so big, we staggered out of it with our eyes bleeding,” said Jack Blum, who co-directs the annual event with his wife, Sharon Corder.

Blum and Corder are the founders of Reel Canada, a non-profit group that introduces school children and new Canadians to Canadian films, bypassing the Hollywood-centric distribution system to take domestic offerings straight to the people. They added National Canadian Film Day to their roster in 2014, encouraging groups across the country, everywhere from schools and libraries to seniors’ residences and legion halls, to organize a screening of a Canadian film on a day in April. Reel Canada suggests film titles both old and new, and then provides help getting access to them. But after a massive effort in 2017, which also included screenings in Canadian embassies and consulates everywhere from Hong Kong to Kabul, the couple thought it was time for a break.

“We had been funded as a sesquicentennial project and it was over,” Corder said. Then the mail started to come in, from librarians, from nursing home managers, from other film programmers. Finally, it was that blunt message from New Brunswick, saying “Oh come on, you must have decided on a date by now,” that forced Corder and Blum to recognize that they have, in five short years, created a public event you could no more cancel than you could cancel Valentine’s Day.

“We looked at each other and said: ‘Okay, we don’t have a choice,’” Corder said. Nonetheless, back in June, she and Blum still hoped they could just organize a placeholder, get various broadcasters to air Canadian films on the day as they have in previous years, and take a break from corralling the nationwide screenings. Well, the broadcasters are back, but on Wednesday, April 18, National Canadian Film Day 2018, there will also be more than 870 public screenings of Canadian films taking place across the country. Another two dozen will be held abroad, including in the United States, Iceland, Thailand and Burkina Faso.

With a special emphasis this year on films by female directors, audiences will be watching such recent Canadian movies as Mina Shum’s Meditation Park about a senior who suspects her husband is having an affair, Nora Twomey’s The Breadwinner, an animated film set in Afghanistan, and Aisling Walsh’s Maudie, an Irish-Canadian co-production about the Nova Scotia folk artist Maude Lewis. Classic choices include Sarah Polley’s award-winning autobiographical documentary, Stories We Tell (2012) and Patricia Rozema’s enduring charmer, I’ve Heard the Mermaids Singing (1987). Reel Canada is also marking the day with a Toronto event bringing together directors Deepa Mehta and Alanis Obomsawin for a first-ever public conversation about their careers.

But the real thrust for Canadian Film Day still comes from the many communities that chose to organize their own screenings.

“We keep thinking it isn’t real,” Corder added, noting how small communities, in particular, get behind the event.

Blum and Corder note that the filmmaking industry also supports the project because it wants to promote the idea there is a recognized body of Canadian film that stands the test of time, an identifiable Canadian cinema. They noticed last year, for example, the pride that actor Colm Feore and director Fran ç ois Girard took in celebrating Thirty-two Short Films about Glenn Gould with a full house in Toronto, 24 years after the film was made.

The grassroots, meanwhile, have a broader agenda.

“People really like the opportunity to celebrate being Canadian via the culture,” Blum observes. “We have done it with sports, but people want another outlet.”

It’s a sensibility reflected in this year’s tongue-in-cheek video promoting the day.

Set to Stompin’ Tom Connors’s My Old Canadian Home, it’s a sci-fi spoof that features a trio of wood-chopping Canadians firmly, but politely, showing an intrusive space monster back to a flying saucer conveniently parked at the border – where U.S. law enforcement promptly begin to shoot at the creature. Those looking for a subtler definition of the national culture can always check out a Canadian film. 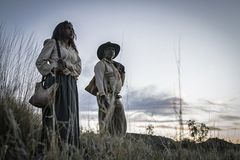 Warwick Thornton’s Sweet Country views the Outback from the inside out
April 11, 2018