By the law of modern moviemaking, Viggo Mortensen should be starring in a Marvel movie right about now. Or headlining a prestige HBO limited series. Or securing any number of the high-wattage easy-paycheque jobs that an actor of his calibre – of someone who headlined one of the biggest franchises in film history – is expected to take on at this point in his career. But Mortensen, who is technically 18 years but metaphorically a century removed from The Return of the King, is not one to abide by expectations. Or compromises.

Take the case of Falling, Mortensen’s directorial debut, which he wrote and also co-stars in. The new drama, following one middle-aged gay man’s attempt to care for his bigoted and dementia-plagued father, is an intense, demanding exploration of family, responsibility and memory. Having shopped the project around the industry for years, Mortensen might have been able to make the movie years ago, and with a larger budget, if he had only agreed to a number of Hollywood suggestions. Suggestions that he has been ignoring his entire post-Middle Earth career.

Such as: Don’t make the characters so unlikeable. Don’t cast character actor Lance Henriksen as the father, Willis. Don’t forget to include fill-in-the-blank scenes detailing every step of the father-son dynamic. Don’t let Willis off the hook for his decades of verbal and emotional abuse. Don’t forget to make something everyone will love. Don’t forget to cast yourself in the lead role as the put-upon son John, to better ensure foreign sales. (Okay, on that last one Mortensen eventually acquiesced.)

For Mortensen, though, there was only one way to make Falling. His way. And the resulting work – personal and passionate, gruelling and messy – offers an assaultive, warts-and-all view of old age, an inevitability that mainstream movies have long tried to soften.

”I understand that for some people who haven’t been around old people, or people like Willis, this is just not their cup of tea. There is no movie made that everybody likes,” Mortensen says. “I never tried to make the audience like Willis. Or make the old guy break down and cry and say he’s sorry for behaving so badly. Or someone shoots him in the end, or he shoots himself. Real life isn’t like that. I made the kind of movie that I would want to go see. One that poses questions, doesn’t offer easy answers and respects the audience’s intelligence.”

Mortensen is talking almost a year to the day that Falling premiered at the 2020 Sundance Film Festival, which is coincidentally where this year’s other big movie about patriarchal dementia, Florian Zeller’s Anthony Hopkins vehicle The Father, also debuted. But while both productions tackle similar thematic territory, and both feature career-capping performances from their elderly leading men, the two couldn’t be more different in how they display life’s last gasp.

”We both had different approaches, which is fine. That is a fine film, but the way we portray dementia, it’s my own experience of what I’ve lived through with several people over decades as a caregiver,” says Mortensen, who took Henriksen to see a Toronto performance of Zeller’s original theatrical version of The Father before the pair started shooting in early 2019.

To be more blunt about it than Mortensen: The Father holds your hand, while Falling slaps it away.

Although Mortensen dedicated his film to his two brothers, Charles and Walter, the filmmaker is quick to note that Willis is not a carbon copy of his own dad, the Denmark-born businessman Viggo Sr.

”We had a better relationship, and could communicate, but they were both typical of men of that generation: they went through World War Two, were self-sufficient, and quite inflexible. They were both not prone to evolving in relationships, and they liked to have the final word on things,” he says.

Yet, Falling was never originally supposed to be about his father at all.

“I started writing the story right after my mother’s funeral, because I wanted to remember things from childhood related mostly to her,” Mortensen says. “But the more I wrote it, the more I thought about my dad and the dynamic there. That’s why it’s dedicated to my brothers – they’d recognize certain things.”

One of which might be the scene early on where a young John takes on a pet duck – even sharing his bed with the animal – before his parents snatch it in the middle of the night, serving it up as dinner the next day. (Don’t worry, though – the trauma was not enough to put Mortensen off eating duck today, those rare times when he does eat meat.)

Given that Falling’s portrayal of old age is based, however loosely, on his own family’s medical history – “there have been many instances of dementia and Alzheimer’s on both my paternal and maternal sides of our family” – is the 62-year-old Mortensen concerned about his own down-the-line livelihood?

”I’ve given the matter a great deal of thought. A couple of years ago I learned that there was a blood test that can show if one has a genetic predisposition to develop these diseases. Fortunately, the results showed that I apparently do not have a likelihood of contracting them,” he says. “One never knows, of course; things can change.”

One constant in Mortensen’s life, though, is Canada, curiously enough. While the actor was born in New York and spent his childhood in South America, his teenage years after his parents split were spent “constantly” border-hopping across the St. Lawrence River. And thanks to three fruitful collaborations with David Cronenberg (A History of Violence, Eastern Promises, A Dangerous Method), Mortensen has taken a particular shine to our domestic industry. Falling was shot largely in Ontario, and Cronenberg himself appears in a tiny perfect cameo as Willis’s proctologist.

Speaking of: Mortensen is planning to reunite with the semi-retired Cronenberg on a new film this year: an “original story” that the Crash filmmaker wrote years ago but never managed to make into a movie.

“Since you bring him up, I find it inexplicable that David has always had trouble raising the money to make his movies,” Mortensen adds. “His work is always original and thought-provoking, and he always completes it on-time and on-budget. Not only do I find it odd that investors have not lined up by the dozens to fund his projects over the years, but I also am at a loss to explain why, during his long and outstanding career, he has not once been nominated for an Oscar for his writing or directing.”

A decidedly non-Hollywood suggestion, then, for Mortensen’s next directorial effort: How about a biopic of Cronenberg himself? One uncompromising artist deserves another. Viggo Mortensen returns to TIFF with the enigmatic Jauja
September 9, 2014 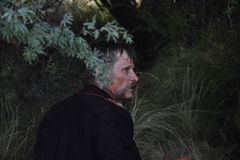