One of the most enduring comic-book franchises in Europe belongs to Lucky Luke, the righteous gunslinger who is faster than his own shadow. Introduced by the Belgian cartoonist Morris in 1946, he persists to this day, now drawn by the French cartoonist Achdé. His adventures bringing justice to the Old West, in which he disarms rather than kills, have been translated from French into dozens of languages but always end as Lucky Luke rides off into the sunset singing, in English, “I am a poor lonesome cowboy, and a long way from home.”

Created by European artists researching the history of 19th-century outlaws in rural America, borrowing heavily from old cowboy movies and prolonging those images for generations of young readers everywhere but America, Lucky Luke is a prime example of cultural appropriation. Why should Hollywood control all the tropes?

Rather similarly, Wes Anderson’s new animated film Isle of Dogs represents an imaginative engagement with the powerful icons of Japanese culture: Set in a fictional Japanese city a decade in the future where all the dogs have been banished to an island of garbage, it is a film inspired by samurai movies, woodblock prints and manga comics, stuffed with sushi, sumo and taiko drums. Just as Lucky Luke delights in an image of the American frontier cherished in Europe, Isle of Dogs celebrates aspects of Japanese culture beloved in the West. The difficulty, of course, is that, in an increasingly globalized world, creating art that assumes a single perspective on another culture provides great opportunity for giving offence.

And some are taking offence as American critics debate whether Isle of Dogs, which opened last week, is celebrating or exploiting its Japanese sources. Brilliantly animated using stop-motion techniques, Isle of Dogs was clearly well-researched and was created with the participation of the Japanese actor Kunichi Nomura as a consultant, translator and co-writer. It’s filled with accurate detail and doesn’t contain obvious racist stereotypes, balancing its B-movie baddie – a dictatorial mayor with a conspiracy to rid the world of dogs – with a refreshing hero, namely a 12-year-old boy named Atari quietly determined to find his pet.

The film’s difficulty is that it turns on the linguistic gap between the English-speaking West and Japan: The barks have all been rendered in American English with an all-star cast (Bryan Cranston, Bill Murray, Jeff Goldblum) voicing the dogs while the human characters mainly speak Japanese and no subtitles are provided. The result is that an English-speaking viewer understands the humans the way a dog might, grasping the tone and general meaning but not the words. That has led the film’s strongest critics – especially Brooklyn film writer Angie Han and Los Angeles Times reporter Jen Yamato – to accuse the film of humanizing the dogs and dehumanizing the Japanese.

Certainly, the film turns on an audience’s traditional affection for cute animals as the dogs languish on their garbage-ridden island. Isle of Dogs could be read as a metaphor for ethnic cleansing, and an ill-advised one, considering that the United States interned Japanese-Americans during the Second World War and Japan interned civilians from enemy countries. Also, Anderson’s decision to include a lone American heroine, the improbable exchange student who helps unmask the corrupt mayor (and therefore provides an English-language version of the film’s climax) is an obvious mistake. But, with her weird white Afro and Japanese school uniform, the Caucasian Tracy is actually a more distant figure than the admirable Atari, who says little other than a few basic commands to the dogs but wins sympathy with the sheer force of his will. (Some commentators have objected to his name, best known as the brand name of an American video-game developer, but it is also the Japanese word for jackpot or bull’s eye.)

There is a particularly effective scene where Atari insists on stopping in his hunt for his dog to ride an abandoned pagoda slide, a child’s desire for play suddenly erupting from his singlemindedness. The animation and the character work (he’s voiced by Koyu Rankin) are subtle and strong, and the mashup – the pagoda slide has one of those fairground signs indicating how tall a child must be to ride – is typical of Anderson’s cross-cultural whimsy. The filmmaker has attributed his initial inspiration to the classic movies of Akira Kurosawa and his film speaks as much to the current power of contemporary Japanese culture in the West as to its exotic distance.

Hollywood has struggled with that power before as it tries to figure out how to borrow sensitively: Warner Bros. has still not succeeded in making its live-action adaptation of the Akira manga, pondering for more than a decade how to adapt a Japanese story for Western audiences. The potential difficulties of casting American stars as Japanese characters were highlighted last year when Rupert Sanders’s Ghost in the Shell, an adaption from another popular manga, was heavily criticized for casting Scarlett Johansson in a lead role many felt should have gone to an Asian actress. It’s touch and go in Isle of Dogs, but as we devour our sushi, the resilient Atari is at least worth recognizing as an attempt to find the universal human element in the cultural exchange. 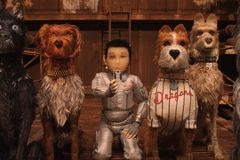 Wes Anderson's 'Isle of Dogs' to open Berlin film festival
December 4, 2017
Follow Kate Taylor on Twitter @thatkatetaylor
Report an error Editorial code of conduct
Due to technical reasons, we have temporarily removed commenting from our articles. We hope to have this fixed soon. Thank you for your patience. If you are looking to give feedback on our new site, please send it along to feedback@globeandmail.com. If you want to write a letter to the editor, please forward to letters@globeandmail.com.
Comments are closed