Technically, the number of films based on the work of novelist J.D. Salinger numbers a big fat zero.

Okay, there are two exceptions: the impossible-to-access 1984 Mexican short film Fragmento, which brazenly credits The Catcher in the Rye as its source material, and the similarly forgotten-to-time 1995 drama Pari, an unauthorized adaptation of Franny and Zooey that, to my knowledge, hasn’t been screened in North America.

Otherwise, Salinger and cinema keep a respectful distance from one another, largely thanks to the late author’s adaptation-averse estate – and a famously sparse catalogue of published works. (Not helping matters, surely, was Salinger’s most famous creation, Holden Caulfield, exclaiming in The Catcher in the Rye that, “If there’s one thing I hate, it’s the movies.”)

But when it comes to films pivoting on the persona or idea of Salinger – his influence, reputation, legacy – it is an entirely different story. Call it Salinger-y cinema. In addition to The Graduate, Dead Poets Society, the entire filmography of Wes Anderson and the 2017 biopic Rebel in the Rye, we now have Québécois director Philippe Falardeau’s drama My Salinger Year, which is both about Salinger and not at all.

My Salinger Year is The Devil Wears Prada but with books, and no that’s not a recommendation

Following one young writer (Margaret Qualley) as she works at Salinger’s New York literary agency during the mid-1990s, the film is partly an adaptation Joanna Rakoff’s 2014 memoir of the same name and partly a fanciful look at how Salinger’s work has affected an untold number of readers and would-be “voices of a generation.”

We see Joanna jump through hoops to please her prickly boss (played by Sigourney Weaver) and navigate her way through Manhattan’s treacherous lit scene. But Falardeau also devotes time for Joanna to hear from, and interact with, the legion of Salinger fans whose letters end up on her desk every morning. With Salinger himself played in spectre-like form by Tim Post, the film seeks to both honour the author and demystify the man.

Which is a little odd, considering that Falardeau didn’t read Salinger until he was 48 years old.

”In high school, I had a choice between reading Mordecai Richler and J.D. Salinger, and I chose Mordecai,” says Falardeau. “It was more about Joanna’s memoir. One day a few years ago, I was browsing in the library, and I found it. I felt immediately close to her character, in the sense that I had strong recollections of that moment in our life where we’re overwhelmed by the possibilities of what we want to do. And I was touched by this relationship she develops with the fans who write in, because I wrote to authors and filmmakers when I was younger, too.”

Falardeau, who shot the film in his hometown of Montreal, also discovered that his assumptions about Salinger’s most famous creation, Catcher in the Rye’s cynical teenage narrator Holden Caulfield, were misplaced.

”I don’t think as a teenager I would’ve been as touched by the non-conformist aspect of Holden. Today, I read it more as a mental illness. It’s really depression, which was something not named back then,” the filmmaker says. “But the film isn’t about Salinger so much as the idea people had about Salinger. I didn’t want him to eat up the film.”

Weaver, who plays Joanna’s boss Margaret like the Anna Wintour of the books world, was also far from a Salinger devotee.

”I went to an all-girls school, and I guess I thought his books were very boy-oriented at the time, except for Franny and Zooey,” the actress recalls. “But I think that Salinger is the kind of writer that we should all return to, even if this is more a story of a beautiful mentoring relationship between two women.”

To that end, Falardeau didn’t even want to call the film My Salinger Year.

”I wanted the film to be about her, not about him. So I think the title can be sometimes misleading. We had extensive conversations about the title,” he admits. “If I’m a die-hard Salinger fan, then I’m going to be disappointed. But I wanted it to have the connection to Joanna’s book, too.”

“That was one of the big challenges for Philippe: helping us connect Salinger and understanding the reverence he had to this particular story,” adds Weaver. “But by bringing the fans in, with Margaret’s character interacting with them, it makes it that much easier to relate how passionately readers can be about his writing.”

Just as Salinger fans will be waiting a while still for something, anything, new from the author’s archives – Salinger’s son Matt said in 2019 that unpublished material would be coming sometime in the next decade – it was also recently an open question as to when My Salinger Year might make it out into the world.

After premiering at the Berlinale a year ago this week – “a real premiere with more than 2,000 people in the house; it feels like six years ago,” marvels Falardeau – the film was scheduled for a November, 2020, release in Canada. But then theatres started closing up again, including in Quebec, where Falardeau is a name-brand. After several more release-date shifts, the film will finally be released on video-on-demand, as well as a few select theatres, this Friday.

”This is not a spectacular huge film, but it is a nice, wonderfully lit movie that would be great to enjoy on a big screen,” says Falardeau. “Any way, I’m not convinced [theatre closures] are a permanent state. I was just finishing the 2,000-page journal of Simone de Beauvoir, and she writes extensively about confinement during the Second World War in Paris, and they went through that for five, six years. We need to be patient and realize this state is not permanent.”

In the meantime, we can only imagine what Salinger might say about the situation. Or Holden, for that matter.

My Salinger Year is available on-demand, including Apple TV/iTunes and the Cineplex Store, starting March 5

Film Review
My Salinger Year is The Devil Wears Prada but with books, and no that’s not a recommendation
March 1, 2021 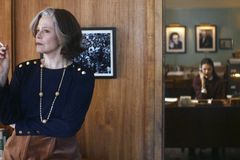