Geetu Mohandas was just four and a half years old when she appeared in her first film. Her acting debut, in the Malayalam language film Onnu Muthal Poojyam Vare (1986), came after a filmmaker neighbour discovered her.

She won the Kerala State Film Award for best child artist for that role, playing a fatherless child who makes a connection with a man she calls Telephone Uncle (played by Malayalam cinema superstar Mohanlal). But just a few projects later Mohandas quit the film scene to focus on her education. It wasn’t until 2000 that she reappeared in Malayalam films, cast once again with Mohanlal in Life Is Beautiful. But this time, she was the film’s leading lady.

“I was a very popular child star,” Mohandas says. “And in Malayalam films they have a thing of reintroducing a child star after many years. It’s like, ‘Hey, you remember this girl?’ … I acted with all the big stars as their daughter back then. And then I acted as a heroine when I came back.”

Dressed in lounge wear, her hair tied back in a loose bun accentuating the sharp angles of her face, it’s easy to see why the camera loves her. Even sitting on the bed of her Airbnb rental near Toronto’s Liberty Village, legs drawn close to her lithe frame, there’s an effortless glamour about Mohandas that could be mistaken for hauteur. She was in town for the world premiere of her third directorial venture, Moothon (The Elder One), at the Toronto International Film Festival, with a subsequent stop to open the Mumbai Film Festival (MAMI) a month later.

It tells the story of Mulla, a teenager who leaves an idyllic village in Lakshadweep for the chaotic Mumbai in search of older brother Akbar, who left many years before. Mulla has grown up more or less as an orphan, raised by a fisherman uncle, hearing stories of Akbar’s prowess as a fisherman but none about the reason he left. Bullied at school and desperate for answers, Mulla sets out on a small fishing boat one night, hoping to reach Mumbai by travelling the Arabian Sea. Mulla does make it to Mumbai and manages to find Akbar after a series of misadventures – but when the truth about Akbar’s departure comes out, it ends up having drastic consequences for the siblings. In the role of long-lost brother is Nivin Pauly, one of the most popular contemporary stars in Malayalam cinema. Known for playing meet-cute romantic roles with a slight edge, he’s pushed to new limits in this film in a part with several shades of grey.

Migration, a central idea in Moothon, is a common narrative in her films, Mohandas says. Themes of searching and displacement, as well as stories about minorities, have always interested her. Growing up, Mohandas moved around a lot herself – first to Kuala Lumpur, then back to India and then to Canada when her father was posted in Toronto for his job with an Indian multinational conglomerate. But her own migration, compared to that of many around the world, was one of privilege, she says

“I come from a home where my parents chose to [come to Canada] for a better life, and I was well protected,” she says, adding that she attended high school in Toronto and pursued an undergraduate degree in law and politics from University of Western Ontario. In her films she’s “talking about people who don’t have a choice ... who are forced to be displaced by their circumstances. So that’s very different from my migration. But there is a subconscious layer of migration that happened in my life as well, so maybe [it informs my story choices].

“Maybe internally I am searching for something and hopefully I will find that in my next film. A trilogy conclusion,” she adds, laughing.

Mohandas eventually returned to Kerala to become a lead actor in Malayalam cinema, but through the years, she’s always been a writer, scribbling stories since her childhood. So when acting started to leave her feeling stagnated, she took to writing and directing her own films. Her 2009 directorial debut was a short called Kelkkunnundo, which told the story of a blind girl left to be looked after at a car mechanic’s garage while her mother goes to work as a maidservant, and how the girl makes sense of the world around her through sound. Her first directorial feature, 2013′s Liar’s Dice, tells the story of a woman, her daughter and their pet goat as they set off in search of the woman’s missing husband. Liar’s Dice went on to win a National Film Award in India and was the country’s submission to the Oscar’s foreign language film category in 2015.

As a female filmmaker, she’s able to bring a different perspective to the stories she tells and the characters therein, she says.

“It’s a male dominated industry, and women – especially the time that I was an actor – it was not such a great time for the leading ladies,” she says. “We were used as mere props in the films, where we didn’t have an opinion, the films didn’t centre around us. It was a very star-driven industry.”

With new voices emerging, things are changing. Nevertheless, some traditional attitudes persist. Much before the #MeToo movement hit a groundswell across the world, several women in the Malayalam film industry came together to form the Women in Cinema Collective in solidarity with a prominent female actor who alleged that popular Malayalam cinema star Dileep was behind her abduction and sexual assault. Dileep is currently out on bail, and working several film projects.

As one of the founding members, Mohandas says the process for change can be frustrating and that it can take a long time to see progress.

"Who are these perpetrators that we are trying to nail? How many have been nailed? It's not even close," she says, her voice rising. "But people are now wary ... There has been a clean up act, especially in the Malayalam film industry."

People in the industry don’t want to speak out on these issues because they fear they won’t get work as a result. The Women in Cinema Collective is taking it one step at a time, she adds.

No bull: The frenetic, chaotic, breathtaking Jallikattu is the Jaws of Malayalam cinema Subscriber content
September 26, 2019 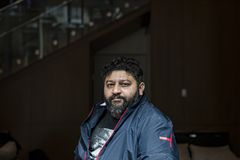